A Catholic school’s plan to expand that includes demolishing the backs of a block of historic 1850s rowhouses in Mt. Vernon was back before CHAP, Baltimore’s preservation board, and it was time for an up or down vote.

The panel had previously rejected a request by the Loyola School, to raze the rear portions of 104, 106, 108, 110 and 112 East Madison Street in the historic Baltimore neighborhood.

Yesterday, armed with scaled-back demolition plans, they again made a plea for the commission to approve a project they said is “critically needed” and could not be accommodated at any alternate site.

“What we’re doing is good not only for the neighborhood, but. . . for the Baltimore City community at large, especially those who don’t have an opportunity for a good education,” said the school’s president, Rev. William J. “Bill” Watters.

Located at 801 St. Paul Street, the Loyola School is a full scholarship pre-school serving children from low-income families. Formerly known as the Loyola Early Learning Center, the school has plans to expand in order to offer kindergarten through 4th grade classes.

The Madison Street houses viewed from Calvert Street where the school’s entrance will be. At left is St. Ignatius Church. (Fern Shen)

Despite the modifications, the project was still opposed by Baltimore Heritage, Mt. Vernon Belvedere Association and at least 30 residents who had written letters against it. The staff of CHAP (Commission for Historical & Architectural Preservation) also continued to recommend against it.

Addressing the online hearing, resident Christopher Hyde denounced the plan as an ill-conceived and irreversible “facade-ectomy” that, while leaving the front walls facing Madison intact, would remove internal load-bearing walls and stairwells as well as back-of-the-block structures.

“This will forever prevent these perfectly proportioned homes from ever being restored into livable spaces again,” Hyde said.

Despite modifications, the demolition plan was opposed by the community association and CHAP staff

Mt. Vernon resident Drew Rieger pointed out that, as opposed to the elegant front parlors, the “back houses” were historically the locations of the kitchens, the sculleries, the work rooms, the servants’ dining room and the bedrooms for the servants and, in some cases, the slaves.

“This plan destroys what I like to think of as the physical vestiges of the working class,” Rieger continued. “The cooks, the people who did the laundry like my great-grandmother, the people who cleaned, the chamber maids.”

That argument made an impact on Commissioner Aaron Bryant.

“I was actually moved by the testimony about the servants entrance and the back of the house,” Bryant said.

“You don’t think about the history of servants being enslaved in urban settings and would this be a case where there would be some sort of erasure,” he wondered. “It’s a tough one.”

In the end, none of the commissioners voted “no.” Bryant and Commissioner James French abstained.

Voting to approve the demolition plan, with the condition that the applicants return to CHAP for design approval, were Commissioners Anath Ranon, Laura Penza, Kate Edward and Jill Dennis.

Chairman Tom Liebel held back, saying he would vote if necessary to break a tie, but his comments indicated his thinking.

“Are the proposed renovations and demolitions so significant that it will have an incredibly adverse impact on the historic structures?” Liebel asked.

“Or are we at a point,” he continued, “where the majority of the building will be preserved and we can feel comfortable moving forward with a program that is clearly important to the community?”

Hyde said afterwards it was unprecedented for CHAP to ignore so much opposition, including from its staff and the community association.

“What’s the point of a preservation commission if it doesn’t practice preservation and ignores all its own bylaws?” 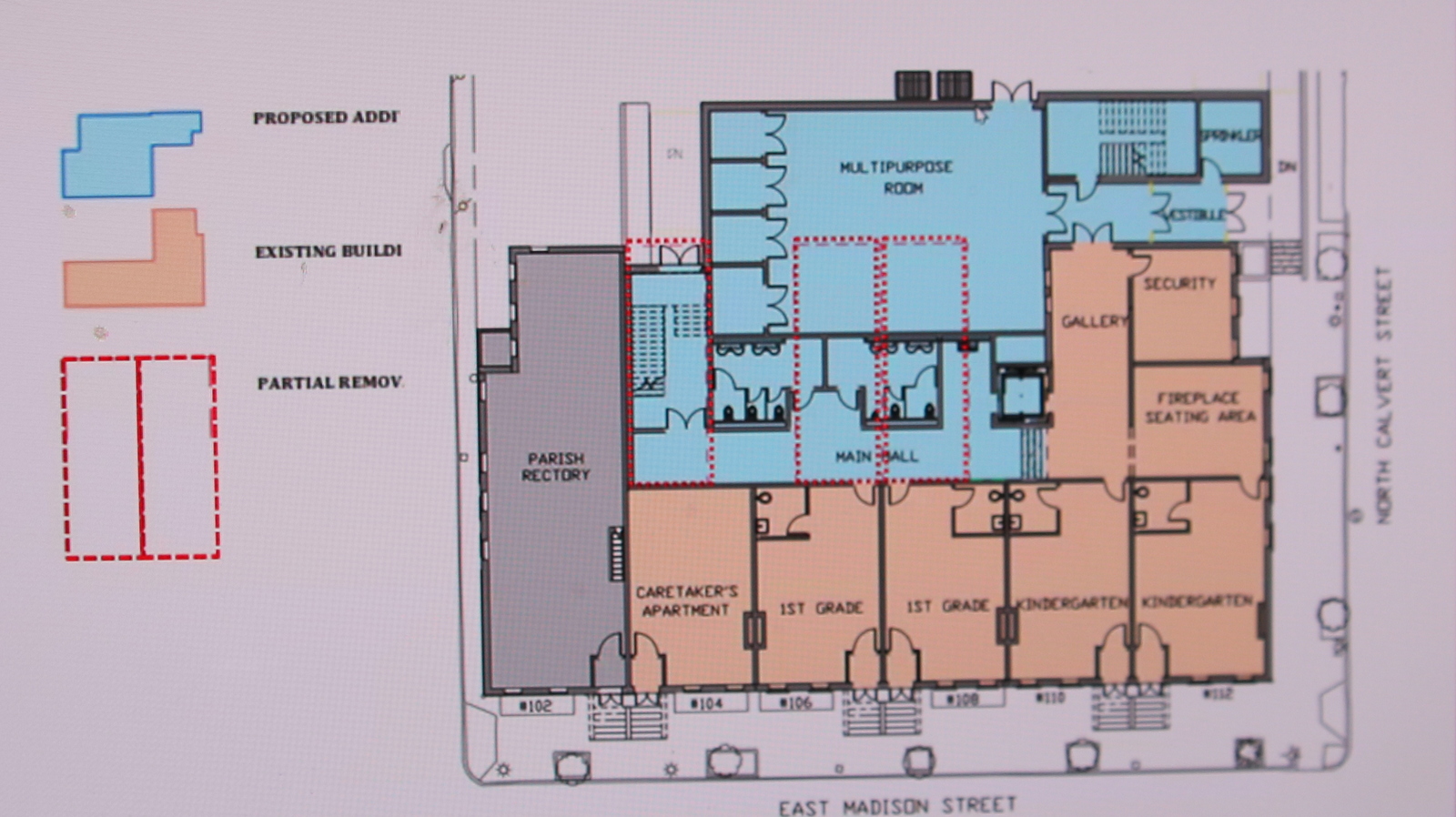 But Loyola had its own support group.

The applicants said their plan had been tweaked to preserve some additional portions of the interior and the backs of two of the buildings.

The plans still called for substantial demolition and keeping the entrance to the school on Calvert Street, leaving the Madison Street entrance doors technically functional but largely ornamental.

Other locations were considered, but finally deemed not viable compared to renovating the Madison Street buildings, which would allow use of the commercial kitchen and other facilities across the street at the affiliated St. Ignatius Church, the applicants said.

As part of his testimony, Joseph Lombard, chairman of the school’s board, recited a list of new sweeteners being offered to the community, including:

Supporting the children’s park across Calvert Street, sharing the school’s new multi-purpose room, possibly making the room available for a Saturday daycare program, creating a children’s choir open to the community, and “giving strong consideration” for admission to any neighborhood children “who meet the school’s criteria.”

In a turn of events that shocked many observers, longtime community activist and developer Charlie Duff, of Jubilee Baltimore, reversed his position, after having previously, as he put it, “shot my mouth off” in opposition.

“This is a very sad occasion for me,” Duff began.

Having had discussions with the applicants, seen their revised plans and learned about their “good practical reasons” for choosing the location, Duff said, he had “come round to saying this project is okay with me. . . the school is a good thing.”

“I have come around to saying this project is okay with me”  – Charlie Duff, Jubilee Baltimore.

“The idea that I had, and that some people have, that these houses could become houses again is something of a pipe dream,” he said, adding that he was persuaded that “the Jesuits are not going to sell these houses.”

The project’s critics said they were skeptical.

“St. Ignatius has had multiple properties in this neighborhood and has, over time, slowly released ownership of different ones,” said Wesley Stuckey. “I look towards the future and think, what’s to stop that from happening again?”

Other witnesses also pointed to past precedent, including Hyde, who reminded the commissioners about past projects approved by the city where developers’ promises about preservation had not been kept.

He mentioned the City House Charles project, for instance, in which a former nightclub building at 1001 North Charles Street to be transformed to a mid-rise office building has been gutted, with just two outer walls preserved.

“Mt. Vernon has been the victim of so many decisions where on the surface the plans look good,” he said. “Things like Mt. Vernon’s Grand Central , that ended up completely outside the scope of what most people thought it would be.”