For those wondering how Baltimore contractors are making out in the “EWO” (Extra Work Order) Department, rest assured – the Bureau of Water and Wastewater is keeping the tap flowing on the controversial practice.

Just this week, for example, the Board of Estimates approved the bureau’s request to bundle $628,248.27 worth of EWOs onto a contract awarded to Monumental Paving & Excavating back in 2010.

The increases were the result of “urgent needs” work performed by the contractor to repair storm drains at Hilton Street, Edgevale Road and Inglewood Ave., as well as a ruptured drain system under Cathedral Street that flooded the basement of the Walters Art Museum in September 2011.

The contract (SWC 7761) was won through competitive bidding by Monumental on June 16, 2010. Between that date and the contract’s expiration on January 24, 2012, the water bureau used the contract to ask Monumental to perform emergency work, then bill its costs as EWOs.

This practice has been criticized by Arnold M. Jolivet, managing director of the Maryland Minority Contractors Association, as “an illegal mechanism” to circumvent the City Charter calling for competitive bidding on contracts over $25,000.

Rudolph Chow, chief of the water bureau, has defended the practice as essential to ensuring public safety when emergency repairs are needed on the city’s aging water and sewer system.

In June 2011, City Auditor Robert McCarty called on the water bureau to limit the practice of EWOs as much as possible after they added $9 million to another water contract. The auditor’s office has not actively pursued the matter since then.

Even though the Monumental contract expired last January 24, the city kept paying EWOs for Monument’s prior extra work. The latest round of payments “was delayed by revisions during the administrative review process,” according to the Board of Estimates agenda.

George P. Mahoney Jr., owner of Monumental Paving, is a longtime giver to local Democratic officeholders. In the 2011 election cycle, he gave the maximum individual donation of $4,000 to Mayor Rawlings-Blake and $1,500 to City Council President Young. 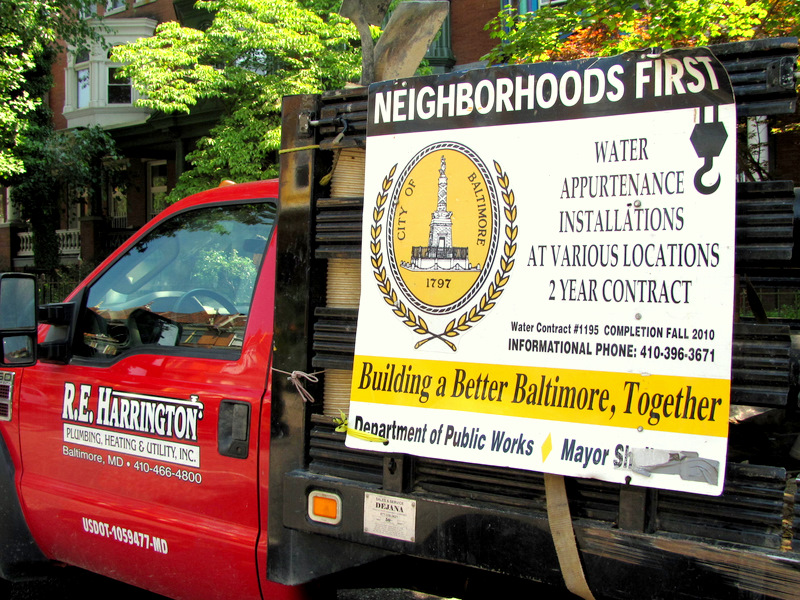 In July 2012, a Harrington crew works on a fire hydrant replacement contract that, according to the sign on the truck, was supposedly completed in Fall 2010. (Mark Reutter)

The award of $104,600 was the 25th EWO on a contract awarded to Harrington in October 2010 for the installation of fire hydrants and other “water appurtenances.”