The managing director of the Maryland Minority Contractors Association proposed to the Board of Estimates, which the mayor controls, that the lowest bidder on a city contract be given a window of opportunity to rectify any technical problems regarding its compliance with minority contracting rules.

According to Jolivet, the present “vetting” system for minority participation not only acts to restrict, rather than expand, minority businesses, but it costs taxpayers millions of dollars per year.

A major reason is the non-transparent way that the Minority and Women’s Business Opportunity Office operates.

Perhaps the most powerful “unknown” agency in city government, MWBOO determines if a minority or women-owned company is certified to do work in the city and is in good standing with the state Assessments and Taxation Department.

If errors are found in the extensive paperwork demanded by the agency – even minor infractions – MWBOO has the unilateral right to reject the low bidder and move on to the second (sometimes third) low bid.

Here’s the rub: the lowest bidder is none the wiser until a few days – and sometimes a few hours – before the weekly Board of Estimates meeting. And the public is clueless because MWBOO’s rejection of a low bid is not disclosed in the board’s published agenda.

Not only does this process lack transparency, according to Jolivet, it is so complicated that MWBOO itself will accept bids that are “out of compliance” or waive minority/women’s hiring rules for a variety of reasons.

The bottom line is this – city taxpayers quite often pay higher prices on “competitive bids” without ever knowing it.

Yesterday, for example, the board awarded a $4.8 million water meter installation contract to J. Fletcher Creamer & Son after MWBOO rejected the lowest bid of $4.1 million because a minority subcontractor had not filed for re-certification at the time of the bid. (The subcontractor has since been certified.) 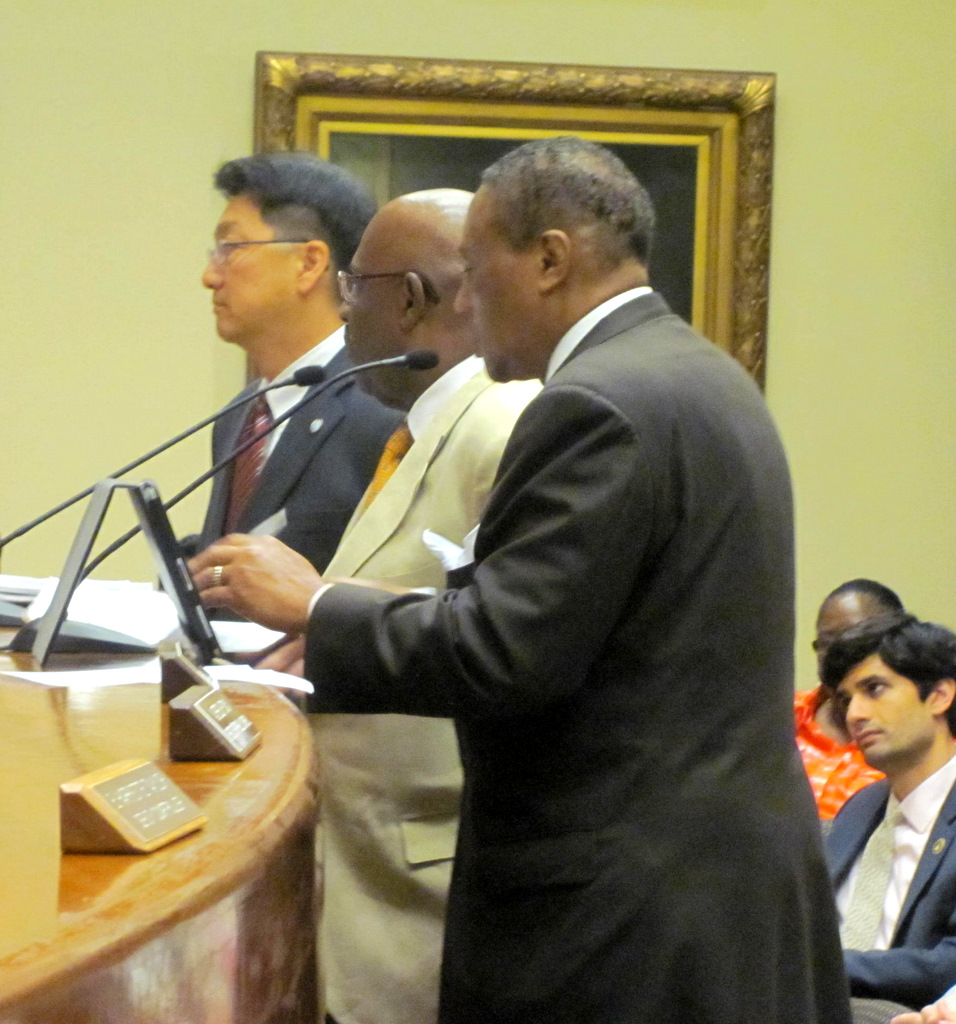 The added cost to Baltimore – $684,420, based on the difference between the low bid by R.E. Harrington and Creamer’s second low bid. (Ironically, Harrington is a certified minority contractor.)

Jolivet, who represents Harrington through MMCA, pointed out that twice in the last month Harrington’s low bid was rejected by MWBOO before it reached the spending board.

In both cases, the mayor and her colleagues awarded the contracts to Spiniello Companies, even though Harrington’s price was $501,900 lower than those of the New Jersey-based company.

“A Lot of Hocus Pocus”

Jolivet’s proposal is that the Board of Estimates require MWBOO to give the low bidder a brief period to come into compliance for minor infractions before recommending the 2nd (s0metimes 3rd) lowest bidder.

Jolivet says this change could save the city tens of millions of dollars a year – and at the same time improve transparency.

MWBOO Director Thomas Corey, appointed by the mayor to his post 18 months ago, has never articulated the basis upon which some contractors get a “pass” on non-compliance and other contractors get rejected as “non-responsive.” Right now, says Jolivet, “there’s a lot of hocus pocus.”

In the case of WC 1255, for example, the city favored Spiniello over Harrington even though a Spiniello minority subcontractor was “not in good standing” with the state Department of Assessments and Taxation.

Spiniello was allowed by MWBOO to substitute a new company if the subcontractor was “not in good standing at the time of the award.”

If Harrington had been granted the same privilege, the city could have saved $1,186,320 across three water contracts, according to a document that Jolivet submitted to the board and whose accuracy was confirmed by The Brew.

In the end, Jolivet’s protest came to naught. Upon a motion by City Solicitor George Nilson (who supervises the MWBOO office), the board rejected the protest and gave Spiniello the contract to install new water meters in Locust Point and East Baltimore.

Mayor Rawlings-Blake did not comment on Jolivet’s recommendation on how to cure MWBOO’s arbitrary handling of low bidders with minor paperwork infractions.

Nor did the two other elected officials on the board, City Council President Bernard C. “Jack” Young and Comptroller Joan Pratt.

Maybe they will take up the matter in the future. That’s something worth considering as taxpayers (and voters) face a 42% increase in their water bills over the next two years.