When Canton was struggling with the future of its residential permit parking area about two years ago, Councilman James B. Kraft not only abolished the parking zone, he made a five-year moratorium on creating  new ones.

The most recent parking battle, over a residential parking bill in Hampden sponsored by Councilwoman Mary Pat Clarke, will end with a mayoral veto – taking the drama to the level of fiasco.

Clarke introduced the bill at the request a small number of residents who felt that the new development at the Rotunda is jeopardizing their on-street parking.

The bill, which originally affected about 18 blocks, got no support from neighborhood groups. In fact, more than 1,000 people signed a petition opposing it.

Despite the strong resistance, a heavily-amended version of the parking bill managed to win passage at the City Council.

In a sudden turnabout, however, the mayor, who originally supported the legislation, said on Friday she will veto it.

After meeting with residents and merchants who opposed the bill, Stephanie Rawlings-Blake decided Hampden residents needed to see the impact of the completed Rotunda – which will feature a movie theater, shops, restaurants and nearly 400 new apartments – firsthand, before taking drastic measures.

This is the third bill that Rawlings-Blake has vetoed in recent months.

Clarke said in an email she knew a veto was possible but was still surprised. 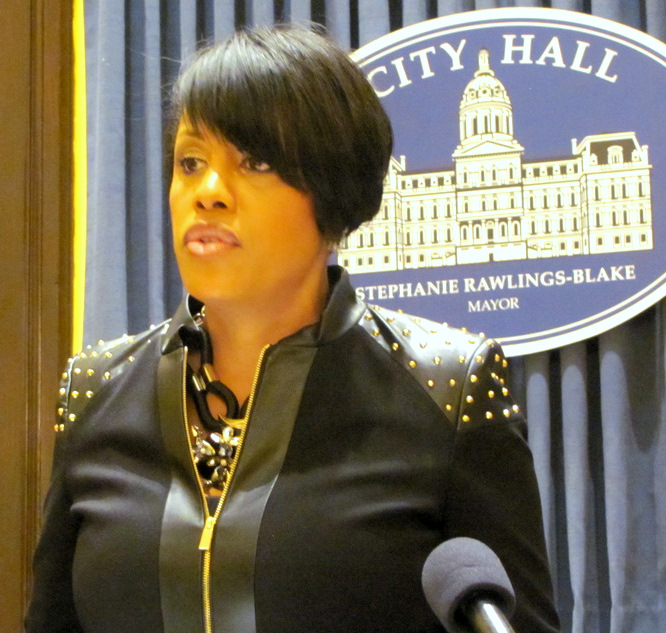 “I met with the mayor at her invitation a week ago Friday, at which she indicated she might veto the bill. I was surprised because all of her agencies reported no opposition.”

It is the first time in Clarke’s  25+ year career in city politics that a bill she introduced was vetoed – and the first time she recalls the veto of a bill affecting such a small constituency.

“This is a bill about using existing law to extend familiar residential permit parking protections for about 150 households in a small corner of a single neighborhood.”

Overreach from the Beginning

Not everyone thought the bill was small, especially before the amendments.

Looking back on the legislation, Benn Ray, co-owner of Atomic Books and president of the Hampden Village Merchants Association, says one of the many problems with the bill was its scope.

Initially, it was to be in effect 24-7, and would allow non residents to park for only one hour. “This RPP was a vast overreach by a vocal few that the community as a whole felt uncomfortable with,” Ray said.

“Had [supporters] gone for the more traditional 7 a.m. – 7 p.m. 2 hours [of parking] Monday-Friday, they would not have had the same volume of community opposition they had,” he pointed out.

Once the bill reached the Council, rivals expected it to be shot down. Instead, in deference to Clarke, a majority of the Council approved it. Only three members – Kraft, Eric T. Costello and Nick Mosby – were opposed.

This flavor of councilmanic courtesy left a bad taste in the mouths of the bill’s opponents.

“With this legislation, you had the Hampden Community Council and the Hampden Village Merchants Association actively oppose it. You had the Hampden Parking Task force note that they refused to endorse this. And yet the Council still voted to pass it?” Ray said.

“There seems to be something fundamentally flawed with this system. I really think this is problematic for good city government and this needs to be watched.”

Clarke says if she had it to do over, she would have changed only one thing:

“I’d have had the Rotunda neighbors meet with the mayor as a group onsite in the blocks immediately adjacent to the Rotunda development, so she could see for herself how ‘mega’ the site was becoming and how already-stressed the blocks have been for months by construction activities.”

Instead, she said, the mayor “met and talked with opponents, but spoke by phone to only one Rotunda neighbor about her concerns. There was never a meeting or visit with them.”

Clarke will be remembered for this parking debacle; the question is for how long.

“I know people who are super angry about this and are planning to run against her in the next election,” Will Bauer, vice president of the Hampden Community Council said.

Ray agreed that some residents are pretty upset, but he believes their ire will eventually pass. “She may have some relationship patching up to do.”

“Who can say? She has worked so hard and done so much good for Hampden over the years that at most, this will be one of those things [where] people will say, ‘Remember that RPP thing at the Rotunda? What the hell was that about?’”