For the fourth time in a month, the Board of Estimates today postponed awarding a $9 million office supply contract after a former high-level city official, who represents a rival bidder, denounced the process.

Thurman W. Zollicoffer Jr., the city solicitor under Mayor Martin O’Malley, called the reasons for disqualifying his client from the bid “blatantly false” and chided the board for not operating above board.

“Lack of transparency undermines the bidding process,” he declared.

Normally, such protests are disposed of quickly by the five-member panel – they are rejected.

Not so at today’s meeting.

After briefly conferring, the board headed by Mayor Stephanie Rawlings-Blake and Council President Bernard C. “Jack” Young deferred the award for a week to “review some of the issues” raised by Zollicoffer.

He represents My Office Products, a Nashville, Tenn., firm that is fighting Rudolph’s Office & Computer Supply, a Baltimore County company that currently holds the contract.

Zollicoffer said his client had offered the city a deal that would be about $50,000 lower a year than Rudolph’s bid, but was rejected for what he called a technicality.

Timothy M. Krus, city purchasing agent, told the board that the reason for My Office Products’ rejection was important – making sure that the vendor had computer-ready interface with city agencies.

Zollicoffer argued that Krus demanded a fully implemented interface within 90 days, which was possible only if city employees cooperated with the company. He argued that his client was improperly disqualified because it did not promise to have a fully integrated system within the specified period. 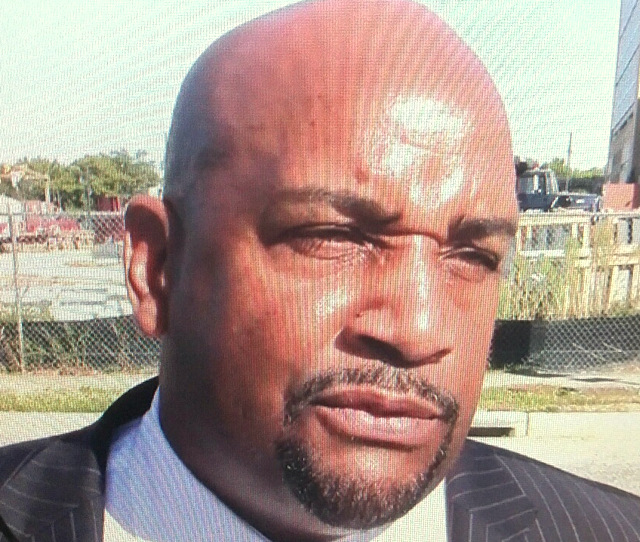 Former city solicitor Thurman Zollicoffer talks about his role as chairman of the East Baltimore Development Inc. (Photo by EBDI)

“We have taken a very careful, thorough look at their responses and are completely comfortable with the award recommendation we have made,” Krus told the board.

He added, “Because we found My Office Products non-responsive, we come to you with a request for an immediate award.”

During his presentation, Zollicoffer took pot shots at Rudolph’s, leading to a tart exchange with Christina Ensley, president of the company.

Saying that Rudolph’s had been “decertified” by Prince George’s County as a minority business enterprise, Ensley interjected to say that was not possible.

“Excuse me, sir. You are re-certified every year. That is part of the process, and you have to submit paperwork every year,” she said.

By deferring the award, the board had to extend the existing contract (held by Rudolph’s) so that municipal offices are kept in ready supply of pens and pencils, computer toners, paper plates and chairs.

During his five years as city solicitor, Zollicoffer was considered a powerful presence at City Hall as Mayor O’Malley’s confidant and consigliere. The two first met in law school.

Now a partner at Whiteford Taylor Preston, Zollicoffer chatted amiably with the mayor and other city officials in a hearing room where he spent many sessions as the city solicitor.

Asked if he was satisfied by today’s deferral, he told The Brew he would have preferred winning the contract outright for his client.