New Jersey-based Spiniello Companies has won one of the biggest contracts of the year, awarded $28 million by the Board of Estimates today to rehab 20 miles of deteriorated pipe and install new connections for 800 houses in far South Baltimore.

Most of the work will take place in Cherry Hill, Brooklyn and Curtis Bay, where cracked sewer mains routinely leak wastewater into the harbor and cause backups in homes and businesses.

In fact, one of the region’s “hot spots” for high levels of fecal bacteria is located where the Patapsco River flows into the Middle Branch near Cherry Hill and the MedStar Harbor Hospital.

The most recent “Healthy Harbor Report Card” gave the off-shore water quality flunking grades and said it was unsafe to swim there or in the Masonville-Fairfield area of Brooklyn.

The repair work is part of the 2002 consent decree that the city signed with the Environmental Protection Agency and Maryland Department of the Environment to avoid millions of dollars of penalties for dumping untreated sewage into the harbor in violation of the 1972 Clean Water Act.

The deadline for completing the infrastructure improvements for the sewer system was January 1. The Rawlings-Blake administration is now negotiating with EPA and MDE for a lengthy extension of the decree. 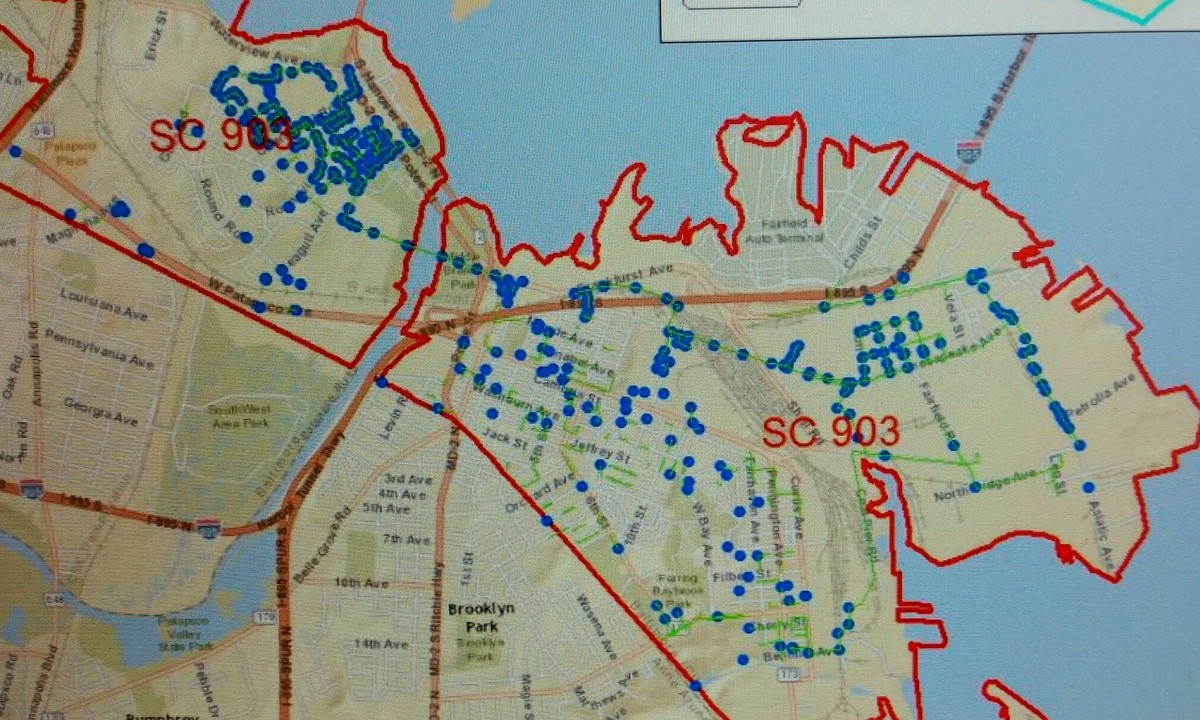 The green lines show sewer lines to be relined, and the blue dots show the manholes to be replaced or rehabilitated. Cherry Hill is located on the upper left and Brooklyn and Curtis Bay on the lower right. (Baltimore Department of Public Works)

Along with today’s contract, Spiniello was awarded another $5.8 million for urgent-need water meter repairs. The contract was mired in controversy last week, causing the spending board to delay action.

At today’s hearing, the board made short shrift of the protests by R.E. Harrington and Metra Industries, who claimed that Spiniello had inside knowledge that allowed it to underbid their prices.

Mayor Stephanie Rawlings-Blake called on the board to reject a request by one of the contractors to have the City Solicitor and the Public Works Director recuse themselves from voting on the contract.

Then the board approved the bid after City Solicitor George Nilson stated that “pretty extreme circumstances and actual facts, not just speculation,” were necessary to disqualify a low bidder like Spiniello.

Spiniello’s $28 million sewer contract calls for rehabilitating 19 miles of sewers with cured-in-place pipe lining and replacing a-third-of-a-mile of existing pipe. The contractor is also required to replace about 340 deteriorated manholes and rebuild the sewer connections between city sewers and 800 houses.

The project will take more than a year to complete and will directly cost the city $11 million, which includes $5 million for design, inspection and administrative costs.

Almost $20 million will be reimbursed by the state, while Baltimore County will fork out $2 million for its use of the city’s sewage lines.