At the end of last year, as the mayor looked on, Finance Director Henry J. Raymond told reporters that the administration would:

• Release audits of city agencies when the audits were ready.

• Not engage in speculation over when they would be disclosed.

• No longer maintain a timetable of audit progress on the Finance Department website.

At the same time, Raymond vowed that all 26 financial and performance audits – covering 13 agencies required by a City Charter amendment passed nearly four years ago – would be published by a December 2, 2016 deadline, the end of Mayor Stephanie Rawlings-Blake’s term in office.

Since those remarks, not a single agency audit has been released by the department.

During the seven-month gap from December to June, the 2016 primary election took place for a new mayor and City Council. Public disclosure about how agencies actually spend taxpayer money could have played a role in the discourse.

Instead, what discourse there was remained, by necessity, broad and theoretical – general pledges supporting audits by many of the candidates – rather than detailed critiques of the practices of specific agencies informed by real data.

Here are some of the agencies whose audits – reported as “in progress” or under review last December – are still missing in action:

• Police. With the largest operating budget in city government, the department has not undergone a comprehensive audit in the last half century. Audits of the department’s performance and finances were promised by Raymond to be released by November 30, 2015.

• Public Works. Partway through a $2 billion sewage renovation program, DPW has been audit-free for decades. The agency has tripled residential water and sewer rates in the last 15 years without any public accounting.

• Transportation. A “performance” audit that exposed various DOT operational shortcomings was released last December. A review of DOT’s finances – promised by Raymond to be out in February – has yet to see the light of day.

• Housing and Community Development. HCD Commissioner Paul Graziano has come under a steady barrage of criticism about dilapidated public housing and a sex-for-repairs scandal. How the agency spends its money is anyone’s guess.

• Recreation and Parks. A blistering audit of the agency was produced by Robert L. McCarty, the city auditor, in 2014. A promised audit covering more recent years (2013 and forward) has yet to surface.

• Mayor’s Office of Information Technology (MOIT). The agency has undergone a merry-go-round of directors and an array of expensive consultant contracts. CliftonLarsonAllen was assigned last October to look at the agency’s books and performance.

So far, the city has allocated about $1.5 million for the audit program. More than half of the money awarded has gone to SB & Co. of Hunt Valley, and the rest to Hamilton Enterprises, CliftonLarsonAllen and the city audit department

Just last week, the mayor and Board of Estimates approved – without discussion or dissent – $297,650 to SB & Co. continue an audit process that has so far yielded such a paltry product.

(FOOTNOTE: 10% of the latest SB & Co. contract will be shared by Abrams, Foster, Nole & Williams, whose managing partner, Arnold Williams, is chairman of the Baltimore Development Corp.) 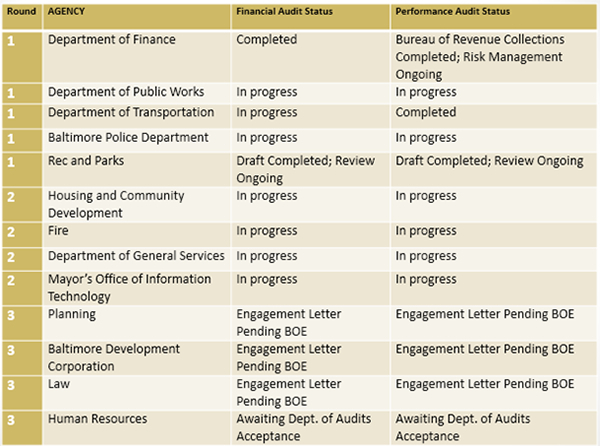 Nine months ago, this was the reported status of Baltimore agency audits. Note that all of the audits listed here as “in progress” have not been released. (Department of Finance website)

“We Should be Proud”

During budget hearings last week, Raymond insisted to the City Council that all of the audits will appear by December 2.

His remarks elicited this exchange between Councilman Eric Costello and the finance chief:

Costello: “We’re on track to complete all of them by December?”

Raymond: “Yes, by the end of the administration.”

Costello: “That’s a great story. We should be proud of that.”

Raymond: “Well, we are. It’s been very difficult. As I said to this body on previous occasions, there was no additional staffing to accomplish this. This has been a manual process because our accounting system has not been designed to prepare financial statements at the agency level.”

Raymond went on to say that he has ideas about how to make future audits (that is, audits that would come after the ones yet to be done) “more meaningful” to the Council and public.

But he said he was not prepared to discuss the matter at present, explaining that more information will be available “at some point” in the future.

If you’re having a déjà vu moment, thinking that you have read this stuff before, it’s because you have.

From The Brew archives:

• Audits will be done, says finance chief, while explaining why none so far has been (10/2/15)