Critics raised a red flag about race and class earlier this summer when they saw the use of the term “Creative Class” to describe the future residents of  Port Covington in the developer’s request for a half-billion dollar financing subsidy. This demographic category, they noted, has been found nationally to be only about 8% black.

Laria said critics of the mixed-use waterfront development project Sagamore is proposing in South Baltimore were taking “some numbers from a spreadsheet”  in the developer’s 535-page Tax Increment Financing request “out of context.”

But in a recently-released 80-page market trend assessment for Sagamore, those affluent, highly-educated – and politically problematic – “Creative Class” types are a central focus.

“Port Covington has the potential to emerge as a corporate-anchored Innovation District and create a live-work-play environment that will reinforce the attractiveness of the city for young, skilled, educated Creative Class workers and innovation economy companies,” says the report, prepared for Sagamore by Battelle Technology Partnership Practice and now on the City Council’s website.

“That’s it, folks. That’s the sole aim and goal right there. Who the project is FOR is RIGHT THERE. This project is FOR ‘young, skilled, educated Creative Class workers,’” said Lawrence Brown assistant professor in the School of Community Health and Policy at Morgan State University.

“That’s why we housing advocates have been so alarmed in the data we’ve sifted through, because Sagamore/Battelle’s ideological underpinning for the rents we saw were specifically for a certain class and race,” said Brown.

(According to Richard Florida, the urbanist who coined the term, blacks represent 34% of Baltimore’s “Creative Class” – well above the national average but roughly half their presence in the city.)

Instead of addressing the equity concerns that have dogged the project, the study appears to have inflamed them, with references to the city as “a high-poverty regional drag on growth” and by relying on an all-white male group of “key informants,” including Downtown Partnership of Baltimore president Kirby Fowler, Baltimore Development Corporation president Bill Cole and other familiar hometown supporters of the project.

The five state and local “key informants” interviewed for the Battelle study of Port Covington. (@BmoreDoc)

“An echo chamber,” said Barbara Samuels, of the American Civil Liberties Union of Maryland, one of the project’s major critics.

“I can’t put my finger on it, but something’s missing,” wrote Brown, next to photos of the government and Sagamore officials interviewed.

The document, Brown said, should strengthen the resolve of the coalition of faith, community and labor groups that has formed around Port Covington to continue the push for stronger affordable housing, minimum wage and local hiring provisions.

Meanwhile another concern that surfaced in the report is the degree to which the project relies on robust population growth – a vision of Baltimore’s future that differs markedly from that of state planners.

“While recent Baltimore City and regional trends in population, employment, and real estate are strongly supportive of the development of the Port Covington/Under Armour Headquarters Project, low levels of projected near and long term population and employment growth represent a challenge to this project,” the authors wrote.

The study noted that, according to the state Department of Planning, “Baltimore City’s population is projected to grow by an annual growth rate of less than 1 percent (0.3 percent)” through 2030.

Sagamore, meanwhile, is counting on an influx of thousands of educated young Millennials and Empty Nesters, as their Creative Class demographic is variously described in the report, to make the project succeed financially and ensure taxpayers are not stuck with paying off the bonds. At one point, Sagamore said they envisioned 14,000 residential units being built there.

Why, given the starkly different population growth predictions, doubt those of the State of Maryland?

“It is clear that these projections are based on the long-term trends in the city, not the recent improvements occurring both in Baltimore City and in cities across the nation in terms of population and employment growth,” the Battelle report says.

“Recent real estate development, including the Excelon (sic) Headquarters and the development of two life sciences based urban research parks/Innovation Districts, indicate that the development community has faith that there is a strong potential for employment growth to continue in the city,” the Battelle report says.

The authors cite a recent report by the Baltimore Neighborhood Indicators Alliance, the Grow Baltimore Brief #1 Understanding Migration in Baltimore City, saying it found that, “there are some signs that the city’s number of households has been trending upwards and indicates that the city is above the track needed to attain this goal.”

“Given both national urban growth trends coupled with the recent performance of the city and ongoing development activity,” the authors conclude, “there is strong reason to expect that Baltimore City can exceed these low projections for population and employment growth and support continued development projects like Port Covington.”

Amid the sunny picture of a flourishing city presented in the Battelle report, there is acknowledgement, on page 40, that ” as the recent civil unrest has demonstrated, Baltimore City still has a concentration of urban poverty.”

Along with the “Creative Class jobs demanded by the new migrants to the city” the report promises jobs for “existing city residents” that “have the potential to help address these socio-economic disparities.”

The report points to Sagamore’s estimate that about 17% of the jobs created at Port Covington by Under Armour and its tenants will be in the retail, hotel and entertainment sectors, “where substantial entry-level job opportunities exist.” 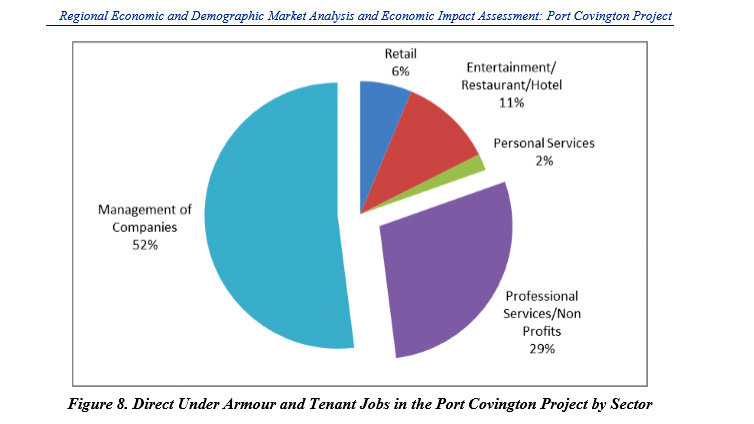 Under Armour and Tenant Jobs, by Sector. (Battelle report on Port Covington)

Also attracting attention in the report is its description of another trend the Port Covington developers hope to exploit – “the rise of Super-Commuters.”

The authors describe this demographic as a person who “works in the central county of a given metropolitan area, but lives beyond the boundaries of that metropolitan area, commuting long distance by air, rail, car, bus, or a combination of modes.”

“Port Covington, with its location on I-95 and potential access to light rail can represent a prime residential location for super-commuters,” the authors observed.

The prospect of a development peopled with not just “live-work-play” denizens but mega-commuters drew comment online over the weekend in some quarters.

“Yes, we all know that Baltimore is being marketed as a bedroom community for DC and Philadelphia and we should consider the trend in reverse too,” a writer on the Baltimore Redevelopment Action Coalition for Empowerment Facebook page observed.

“However, what of the impact on current residents and their housing needs?”