Less than a dozen people showed up Tuesday in front of City Hall to protest an alleged “sweetheart deal” between the Housing Authority and the Living Classrooms Foundation that they said led to Monday’s closing of a much-loved day care center.

Why the lower-than-expected turnout?

Some fingers have been pointing to Councilman Robert Stokes, who represents the East Baltimore district where the Pleasant View Day Care Center had provided services for public-housing residents for 18 years.

Three sources, who asked for confidentiality in return for candor, said Stokes’ top aide, Kathy Christian, had contacted people from the community and had advised them not to participate in the protest.

“Stokes’ office told folks the day care operator couldn’t pay the rent and they shouldn’t get involved in this matter,” said a person with direct knowledge of it. (NOTE 1: The rent-nonpayment assertion is incorrect; the day care center is fully paid up except for one disputed bill.)

Another person said, “Yes, I can confirm that,” adding, “they’ve just been trashing the guy,” referring to Thomas Hardnett Jr., a co-partner in the day care center.

“The word is out on the street, and it divides the people,” said another who has deep contacts in the community. 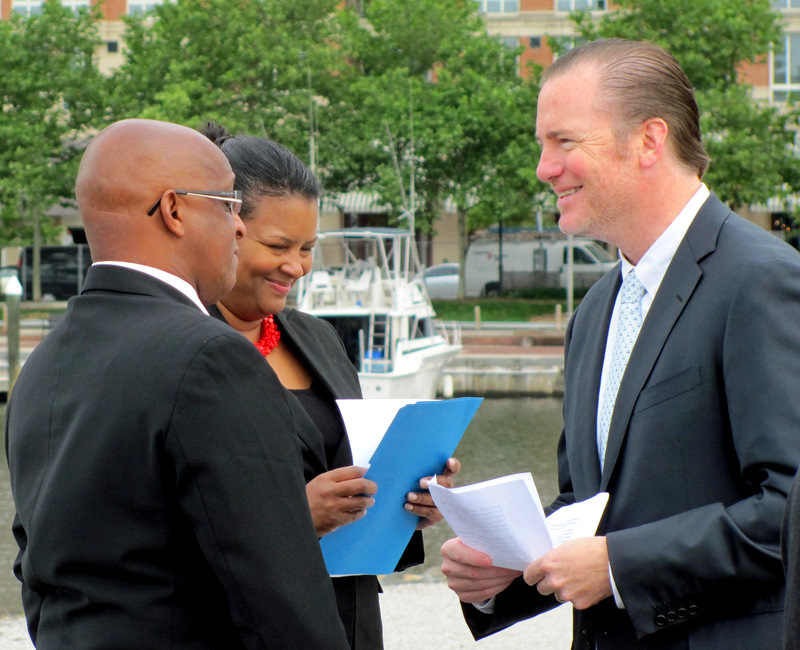 Jack Young greets Harbor Point developer Michael Beatty. Young led the charge for a $107 million TIF tax incentive for the luxury waterfront development in 2013, which included $2 million in TIF funds to pay for a new school building for the Living Classrooms campus at the site. (Mark Reutter)

Adding a layer of fresh intrigue to the controversy has been the suspected backstage influence of Bernard C. “Jack” Young.

Young is the head of the Eastside Democratic Organization (which helped get Stokes elected) and president of the City Council (having sole power to allocate committee appointments and dole other perks out to members).

He has a history of raking in record campaign contributions. And perhaps most relevant to the matter at hand, he sits on the board of trustees of Living Classrooms. (NOTE 2: When grants for Living Classrooms projects come before the Board of Estimates, Young typically abstains from the vote.)

In an email yesterday, the councilman said, “I have not trashed Mr. Hardnett and have no knowledge of his financial solvency.” Stokes did not, however, answer a follow-up question of whether his staff helped curb the enthusiasm of potential protesters. 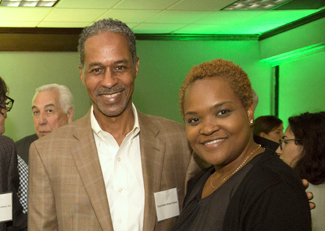 Councilman Robert Stokes and his aide, Kathy Christian, at a recent reception at the Holiday Inn Inner Harbor. (Daily Record)

“Living Classrooms is in a great position to prepare our children for the future. I do feel that while the Pleasant View Day Care may have provided a valuable service to the community over the years, our children will be better served with Living Classrooms because they are adding the critical educational component that had been missing for far too long.” (NOTE 3: About 25 infants and toddlers at the day care center will not be age eligible for Head Start.)

One parent who showed up at Tuesday’s protest praised the center.

Tiangay Waines said her 2-year-old son Diego loved going to the facility. “The atmosphere was good. The place was clean. My son made many friends. It was just a good way for him to be in a learning environment.

“And then,” she continued, “this happened. The place was shut down by people who are not part of the community. I’m saddened by the decision. I don’t think it’s fair.”

She said Diego is currently at home, “which I don’t like because I want him to be in a learning environment, not sitting around watching TV.”

Told that Living Classrooms says there are six day care centers within a half-mile radius for parents to choose from, Waines replied, “I’m not aware of those six centers. I’d like to know about them.”

Living Classrooms’ CEO James Piper Bond, meanwhile, has charged that The Brew has distorted “a really positive story for the city of Baltimore and for the community.”

As a result, he said he would not respond to our questions except if they were submitted to him in writing.

Also not responding to our queries about the day care center closing is Young, who was approached by Hardnett and his day care partner, Sonya Jackson, in June.

They said they told Young that Living Classrooms did not have the right to end their lease and allege that the non-profit had improperly secured the building through a “backroom deal” with the Housing Authority of Baltimore (HABC).

If there was any problem with transaction, they said Young told them, the fault lay with HABC in giving what Bond has told The Brew was a lease for 21 years at a yearly rent of $1.

The building at 1116 East Fayette Street is currently assessed at $1.97 million. However, it is exempt from property taxes because it is part of HABC’s Pleasant View Gardens public housing site.

We’re Not Talking to You

• Has the day care center been behind in its rent payments?

• What are examples of reporting he said were “not factual” or “taken out of context”?

Bond replied in a long message that he insisted was “off the record” and provided “as a courtesy.”

We asked him for permission to put his answers “on the record” so readers could evaluate his statements.

This morning Bond said no.

(NOTE 4: His explanation via email: “You have already interviewed me on the record, and I have provided you with detailed responses to your questions off the record because I have concerns about how you will publish those responses based on your last two stories.”) 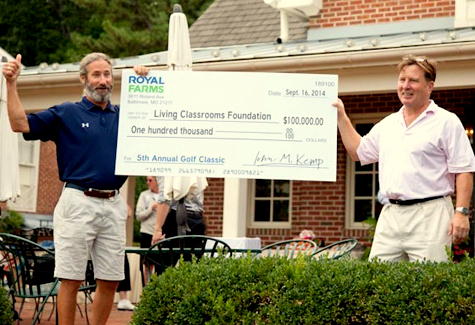