Anthony W. McCarthy is leaving his $137,700 berth as spokesman and a chief strategic advisor to Mayor Catherine Pugh, informed sources tell The Brew.

Reached this afternoon, McCarthy declined to confirm or deny that he’ll soon be heading out the door, saying, “That is an announcement the mayor will make.”

As head of her communications team, McCarthy has labored mightily to craft Pugh’s image as a community-oriented leader “married” to her job, while trying to distance her from the record-setting homicide rate, homelessness and juvenile crime issues that have gnawed at her young administration.

Today, for example, he monitored a sit-down interview between Pugh and The Baltimore Sun for a story the newspaper is planning on the mayor’s first year in office.

Asked today if Pugh planned to issue a statement about the controversial lockdown of a West Baltimore neighborhood following the murder of a homicide detective, McCarthy said that the mayor would not make a comment.

“We will not move in front of the police department as this investigation goes forward,” he said. “She wants to get it right, and it’s very, very important.”

McCarthy, who turns 50 next month and has survived several bouts with cancer, did not respond to a question about his future employment, which sources said may involve work for a local non-profit.

Spokesman for other Mayors

Since arriving in Baltimore in 1995 after a childhood spent in Virginia’s Shenandoah Valley, McCarthy has become a high-level emissary between the city’s black political elite and the media, together with some prominent citizens.

He has served as chief spokesman for Mayor Stephanie Rawlings-Blake during her final months in office (May-December 2016) and as Mayor Sheila Dixon’s communications director between January and November 2007.

Prior to that, he was chief of staff for Dixon when she was City Council president, communications director for U.S. Rep. Elijah Cummings, and an “important aide,” according to a biographic sketch, to former Mayor Kurt Schmoke.

Between stints in government, McCarthy worked as a journalist and talk show host for such media organizations as The Afro-American, Baltimore Times and Morgan State University’s WEAA-FM.

He’s also the creator of the Anthony McCarthy Civil Rights Awards to honor people who “exemplify the principles of equality, justice and service to humanity.”

Its first – and so far, only– awards ceremony took place in 2013 at La Fontaine Bleue in Glen Burnie. Among those feted were his former boss, Rep. Cummings; Archbishop Carl Bean of the Unity Fellowship Church; and former NAACP Baltimore chapter president Tessa Hill-Aston. (McCarthy has done work for the NAACP’s local chapter.)

The “mistress of ceremonies” at the banquet was then-state Sen. Catherine Pugh.

When Pugh became mayor last December 5, he retained that position while becoming one of her closest advisors. 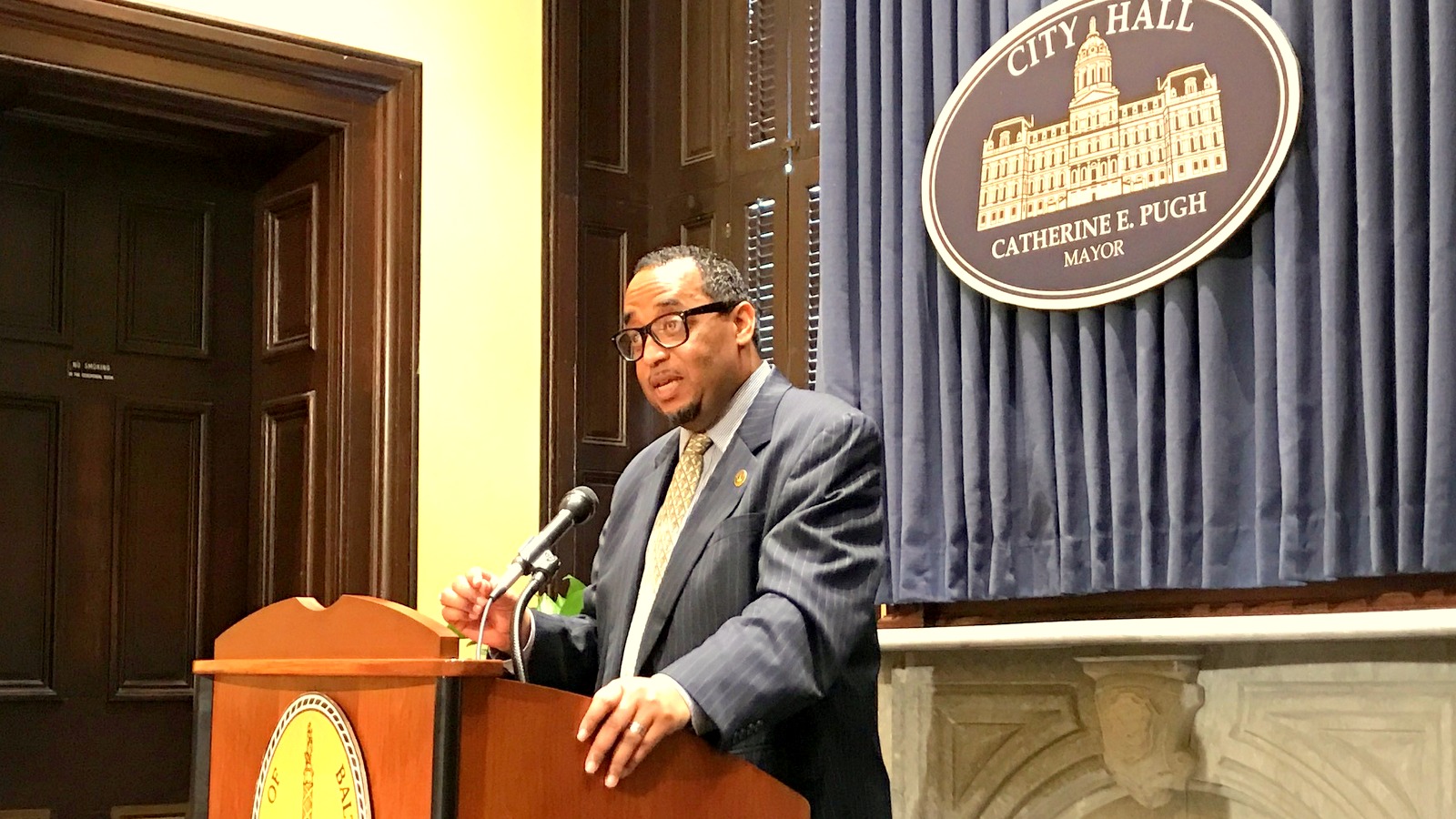 Anthony McCarthy talks about his boss’ hopes and accomplishments following a May 3, 2017 press conference conducted by Mayor Pugh. (Mark Reutter)