After Bill Gilmore announced his resignation a year ago as chief executive officer of the Baltimore Office of Promotion & the Arts, the agency launched a nationwide search to find a replacement.

But BOPA is still without a chief executive a month before Artscape, billed as America’s biggest free arts festival and the one of largest events that BOPA produces.

Employees of the organization say a search was started last fall, a preferred candidate was identified and a name was sent to Mayor Catherine Pugh earlier this year, but no one has been named.

If someone is not hired soon, it will be the first time that BOPA or its predecessors has not had a permanent executive director during Artscape, which is going into its 37th year.

This is not the only key position that has gone unfilled in the Pugh administration before a major event.

Members of the LGBT community have expressed frustration that there has been no LGBT liaison named or functioning LGBT commission appointed before the annual Pride celebration, which starts today.

It was well into her first year in office before Pugh made a number of key appointments: the directors for the departments of Transportation, Recreation and Parks, Housing and Community Development as well as the Baltimore Housing Authority, Mayor’s Office on Criminal Justice and Mayor’s Office of Information Technology, among others.

“It’s like we don’t matter enough to the mayor,” one staffer said.

BOPA employees say they are concerned that their agency has gone more than six months without a CEO, yet it remains responsible for an extensive lineup of events and programs.

Gilmore was a hands-on director and a familiar sight at Artscape, often riding his Segway through the crowds to get from one end of the sprawling event to another. 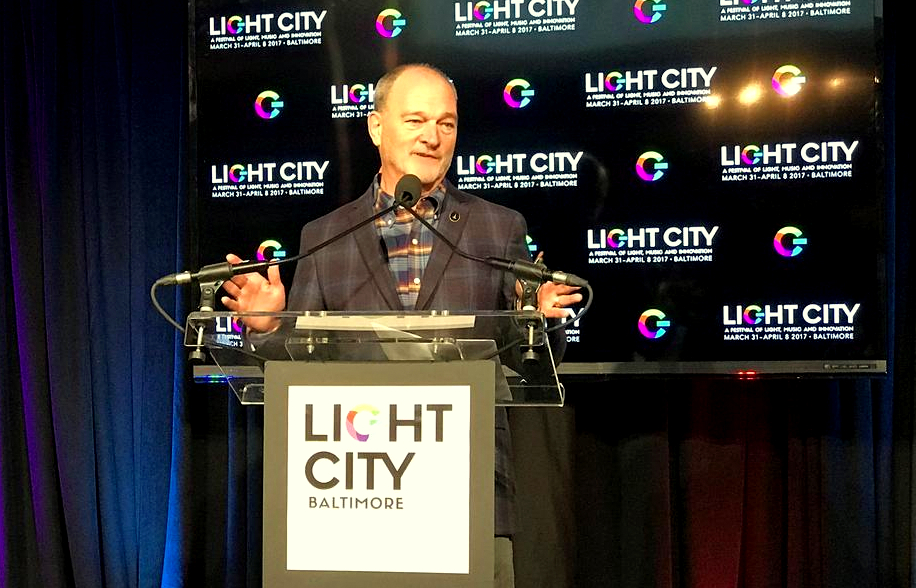 Bill Gilmore, who announced his resignation last June, stayed at BOPA until December. Since then, the agency has had no permanent leader. (Joshua Gordon)

“It seems like every week there is another big festival or program to put on, and a ton of decisions to make,” said one staffer who asked not to be identified.

It hurts morale and causes uncertainty when there is no announcement, said another source. “It’s like we don’t matter enough to the mayor” for her to name a new chief executive.

James E. Bentley, Pugh’s acting spokesman, has not responded to several requests for information or supply a comment from the mayor about the position.

BOPA’s own spokesperson, Tracy Baskerville, said she does not know when a permanent CEO will be announced.

Sources say the reason for the delay is that Pugh was not happy with the selection process and is showing her displeasure by not filling the position quickly.

They speculate that Pugh, who has been in office since December 2016, assumed she would be able to name Gilmore’s replacement because the mayor gets to appoint directors of most city agencies.

Sources say Pugh was not happy with the selection process and is showing her displeasure by not filling the position quickly.

What Does BOPA Do?

In addition to producing Artscape, the agency manages such large-scale events as Light City Baltimore, the Baltimore Book Festival, the Farmer’s Market under the JFX, New Year’s and Fourth of July celebrations, and the Dr. Martin Luther King Jr. Parade.

As the city’s film office, it provides service to all productions scouting and filming in Baltimore. Finally, it oversees historic attractions and sites, including the Top of the World Observation Level, School 33 Art Center, The Cloisters and the Bromo Seltzer Arts Tower.
_________________________
Under the selection procedure that BOPA outlined for prospective CEO applicants, the board forms a selection committee that solicits applications, screens applicants and recommends a preferred candidate to the mayor.

The mayor can accept or reject the recommendation, but she can’t make the appointment herself.

The “leadership transition” process was spelled out in a memo from BOPA that was distributed after Gilmore’s departure was announced on June 1, 2017. 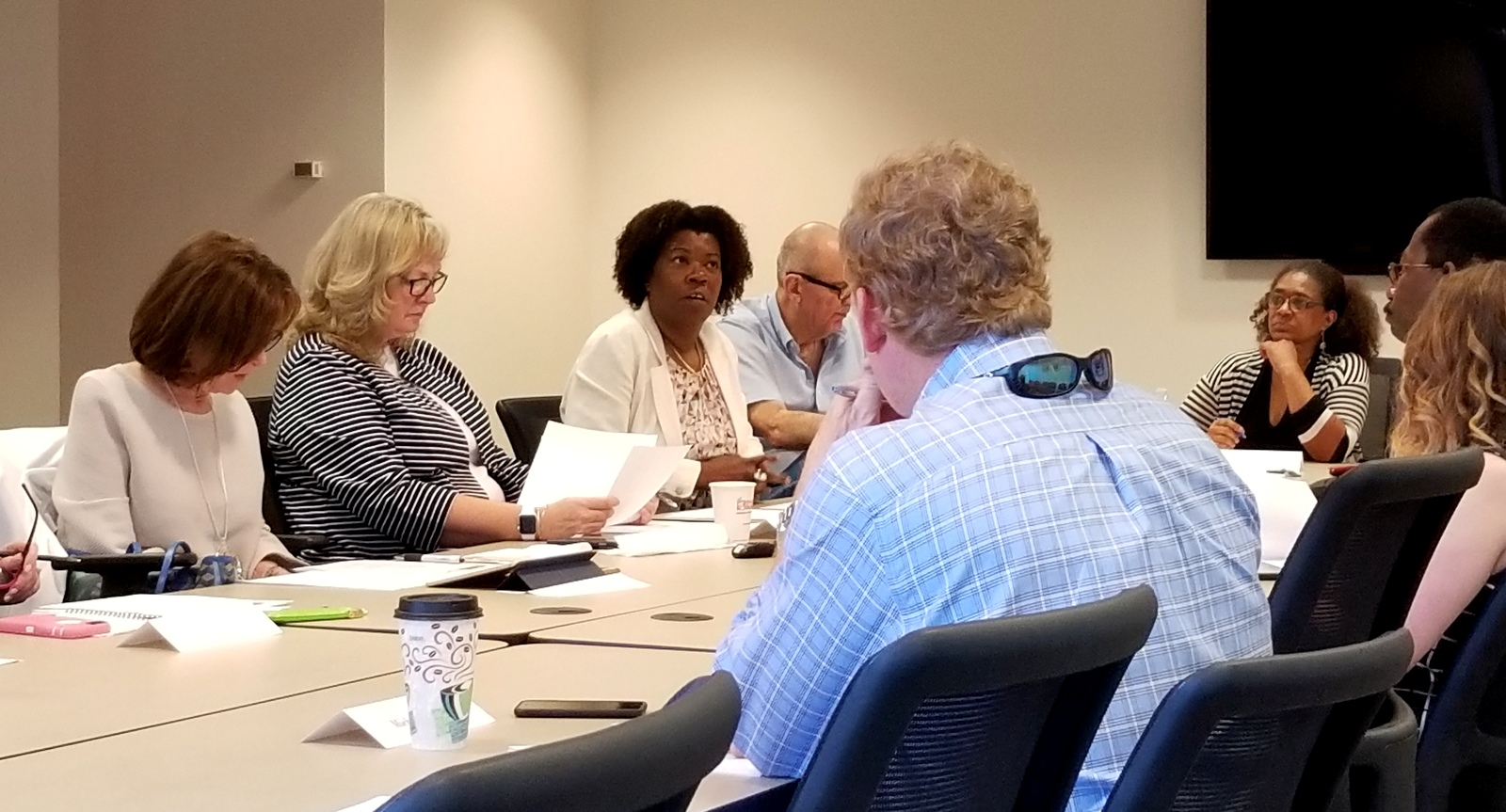 BOPA chair Anana Kambon sits at the head of the table, surrounded by board members, at yesterday’s meeting before it was closed to the public. (Ed Gunts)

“Koya Leadership Partners was retained to partner with us on the CEO search. Koya is an executive search firm that works exclusively with mission-driven clients. They have extensive experience with CEO searches in the arts as well as in the nonprofit space generally.”

Well into the Process

“BOPA and our search partners have begun gathering perspectives from artists, advocates, stakeholders and the community with regards to specific skills, qualities and experiences required of our new leader,” the memo continued.

Spokesperson Baskerville said the deadline for applications has passed. She said she does not know how many people applied or who applied, and referred additional questions to the board’s chair, Kambon. “It’s all done through the board of directors,” Baskerville said.

Kambon presided over the board’s quarterly meeting yesterday. She did not bring up the CEO search while the board was in the open session.

After half an hour, Kambon called for the meeting to be closed to the public so board members could discuss a “personnel issue.”

This reporter, the only member of the public, was asked to leave. The meeting continued behind closed doors for another half hour.

After this reporter was asked to leave, the BOPA board meeting continued behind closed doors for another half hour.

When the closed session ended, the board members dispersed. Kambon agreed to stay behind to answer questions about the search for Gilmore’s replacement.

“We have not finalized everything,” she said. “We hope to do that as soon as possible. We are well into the process. We started the process back in September. . . We hope to finalize the process soon. That’s where we are.”

Kambon would not say whether a preferred candidate had been identified and recommended to the mayor. She only said the board has kept the mayor informed about the selection process. The mayor is represented on the selection committee by Clair Segal, she added.

Asked if the absence of a permanent CEO has adversely affected the work or staff morale at BOPA, Kambon said she sees no sign of it.

“Did you see Light City,” she asked. “We are taking care of business. We are committed to doing great work for the city. We are not going to get slowed down.”