Times were changing in car-centric Baltimore, or so bike advocates thought a decade ago, when some city officials began promising to actively promote better street design and two-wheeled transportation.

A big breakthrough came in 2010 when a request for proposals (RFP) was issued seeking a vendor to operate something new for Baltimore:

A network of kiosks where rental bikes, accessed through membership or a day pass, could be picked up and dropped off.

Not just tourists, but residents trying to get around town, would benefit from the “bike share” program, the city’s then bike planner, Nate Evans, said at the time.

“We consider bike sharing ‘last mile’ transit,” said Evans, explaining a phenomenon that already had been embraced by dozens of major U.S. cities.

This week – after years of on-again, off-again plans and relationships with three different vendors – the city announced it was killing the program it had finally managed to get up and get running.

At the mayor’s press availability, the demise of Baltimore Bike Share was treated as an aside amid talk of the “exciting” new plan the city was hatching.

Mayor Catherine Pugh said her administration had signed agreements with a dockless scooter company (Bird) and a dockless bike and scooter provider (LimeBike) to start a six-month pilot program that would allow each vendor to place as many as 1,000 motorized units on the street.

“Dockless bikes are the wave of the future!” Pugh proclaimed, later climbing onto one of the devices outside of City Hall and scootering around for the cameras. 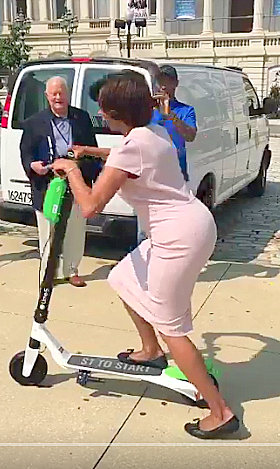 Mayor Pugh shows off her scooter skills as James T. Smith Jr., her chief of strategic alliances, looks on. (@limebike)

What happened to the last wave of the future?

Outweighing the positive reviews of Baltimore Bike Share were the numerous reports about malfunctioning bikes, inoperative locks and an app that increasingly did not reflect the reality at docking stations – namely, that there were frequently few or no bikes available.

Abandoned bikes were spotted all over town. Videos showed thieves rocking the bikes out of the docking stations, and police fishing them out of the Inner Harbor.

“So, missing or stolen bikes had no influence on the decision to end the Bike Share program?” a reporter at the news conference asked.

“Just part of the process,” Pugh added briskly before moving on to other subjects. 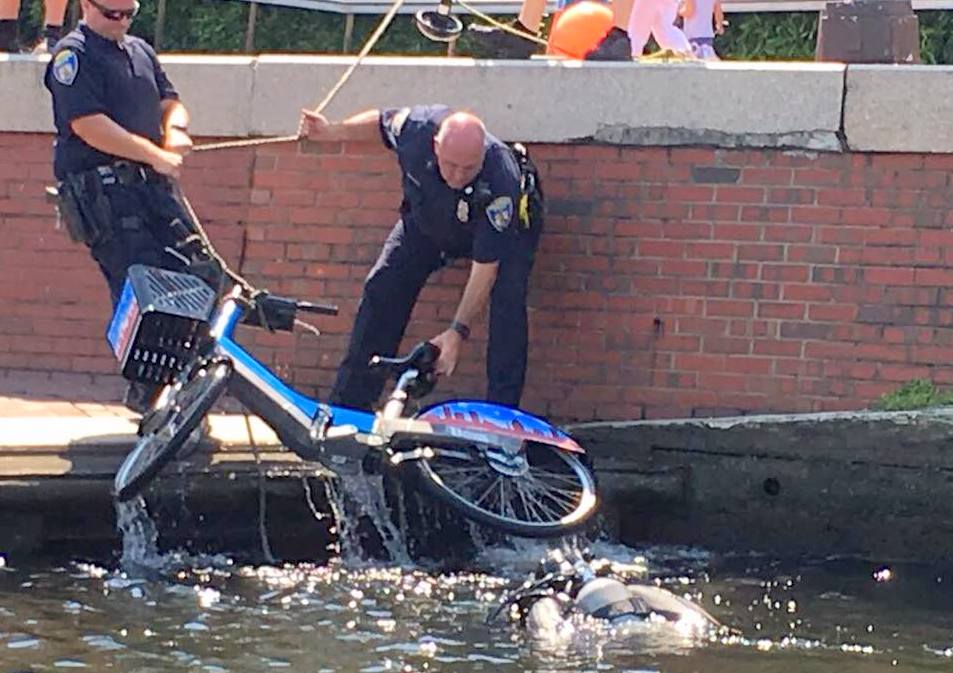 The bumpy road Baltimore followed – as it planned, promoted and executed the various bike sharing iterations – stretched out over many years. It’s unclear how much was spent in that time on those efforts. Asked by The Brew for an estimate, DOT has yet to provide one.

• 2011 – Plans for a 250-bike program are hatched – then dropped – at a time when Mayor Stephanie Rawlings-Blake is under fire for a budget that boosted downtown tourist activities while cutting recreation centers and other neighborhood services.

• 2012 – Rawlings-Blake enters into a bike share agreement with B-cycle  that requires the company to raise about $1.2 million in private funds to build the network. After the announcement, bike-sharing disappears into the maw of DOT bureaucracy and negotiations with B-cycle peter out.

• 2014 – The city promises to launch the program after contracting with Alta Bike Share. But another setback comes when Alta’s supplier for the bikes’ software and the solar-powered kiosks goes bankrupt.

• 2014 – In come the consultants: Whitman, Requardt & Associates are paid $134,925 to look at the concept of a bike share program and help update the city’s bicycle master plan.

• 2015 – The city accepts a $2.1 million bid from Bewegen Technologies to start a bike share system. DOT rejects a much lower bid ($587,500 from Motivate International, formerly Alta Bike Shares) and a higher one (Zagster of Cambridge, Mass.).

• 2016 – Bewegen launches Baltimore Bike Share with fewer than 200 bicycles. (Its debut had been delayed by months because of what officials described as a manufacturer’s supply problem.)

• 2017 – A new mayor and a new set of problems, including poor maintenance and stolen bikes. Incoming DOT director Pourciau shuts down the program to install theft-resistant “Baltimore locks” and other improvements. Only about 50 bikes are in service when the program reopens.

Other than a $10,000 subsidy from the Downtown Partnership to cover memberships for low-income users, no corporate sponsor ever came forward.

Users paid $2 for a 45-minute single trip or $15 for a monthly pass for unlimited rides over 30 days.

During the less than two years of its existence, Bike Share’s failings were well documented.

Reporters found bikes missing from the docks. Riders conducted some even more robust research into the failings of the bikes, the app, the locks and maintenance by the company Bewegen hired, Westport-based Corps Logistics.

“Baltimore’s bike share system is close to shutting down once again due to a lack of maintenance from its operator and its equipment’s inability to handle wear,” software developer Brian Seel wrote in a detailed and prescient Baltimore Fishbowl piece a few weeks ago.

“Most troubling, two out of every five bikes in the system have disappeared,” Seel wrote. Docks were so broken that bikes could not be locked in them, he found. That left electric-assisted bikes unable to be charged and other bikes vulnerable to theft.

Last year, Seel began a post on his blog with this tldr (too long didn’t read) summary:

“I rode around all of the city to all 25 bike share docks and only found four working bikes.” 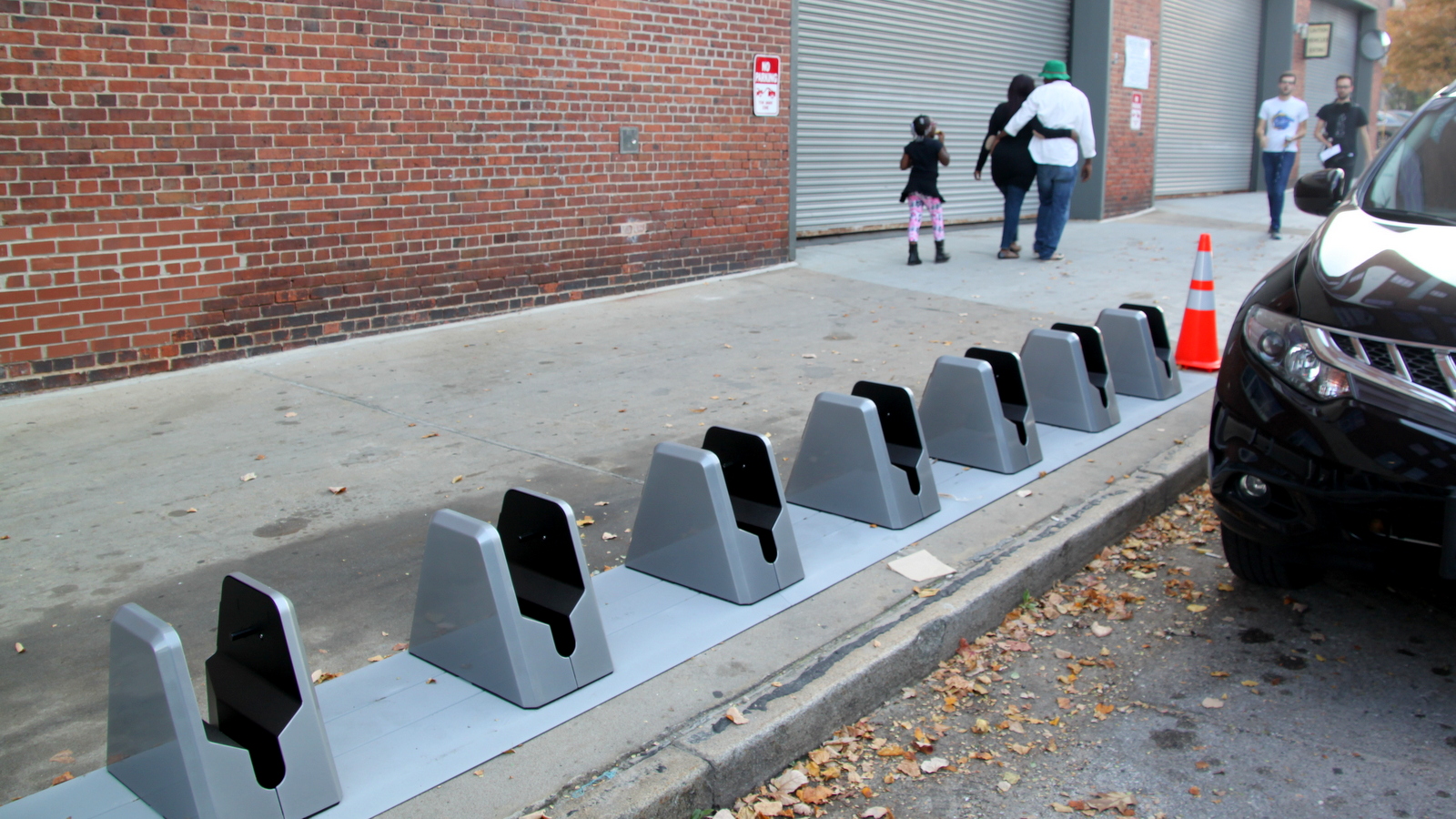 Beyond its technical and management problems, the program came under sharp criticism over equity concerns.

Morgan State University Associate Professor Lawrence Brown and others pointed out that Bike Share’s docking stations were located in parts of the city that are largely white and more affluent – the so-called “White L.”

The greater flexibility of a dockless system will make it easier to avoid that pitfall, said Liz Cornish, executive director of the advocacy group Bikemore.

The chief problem with the existing Baltimore Bike Share system, Cornish said at the City Hall announcement, is “its inability to expand to serve neighborhoods in Baltimore that need transportation the most.”

The new dockless providers will offer discounts to low-income customers and place 25% of the bikes and scooters in neighborhoods where more than 40% of the households earn less than $25,000.

The city has not released copies of the agreements but reportedly they require the companies to “rebalance” the fleet so the scooters and bikes are available equitably across the city.

DOT Director Pourciau also presented the new dockless system as a solution to the main problem with the current Bike Share program, which she characterized this way:

“We’re seeing, like in other jurisdictions, that the number of bikes and where and how to reload, how to recycle those bikes to have [them] where they’re needed, is something that we’re still challenged with.”

Meanwhile, what about getting refunds on the last “wave of the future?”

Online, there was consternation from many, including “founding members” of Bike Share, who paid up early in return for discounts, key fobs and other perks.

Some praised the decision to go “dockless” and encouraged DOT to re-purpose the Bike Share stations as regular bike racks. But many others were angry about the lack of working bikes, failure to expand the number of stations and Bewegen’s failure to respond to reported problems.

“Unfortunately they never built a dock anywhere near my house, so I never had occasion to try one, I’m glad the card I signed up with was replaced so I didn’t auto renew,” one man wrote.

“Like, can I just *have* one of the e-bikes as restitution? I’ll repair it myself,” another said.

“As a founding member of the failed Bikeshare program I hope my refund is not just prorated but covers the many many times I tried to use it and was unable,” one woman complained on Facebook. “I haven’t been able to use it once since my membership renewed. I regret not cancelling it earlier.”

But it must be done by September 30. 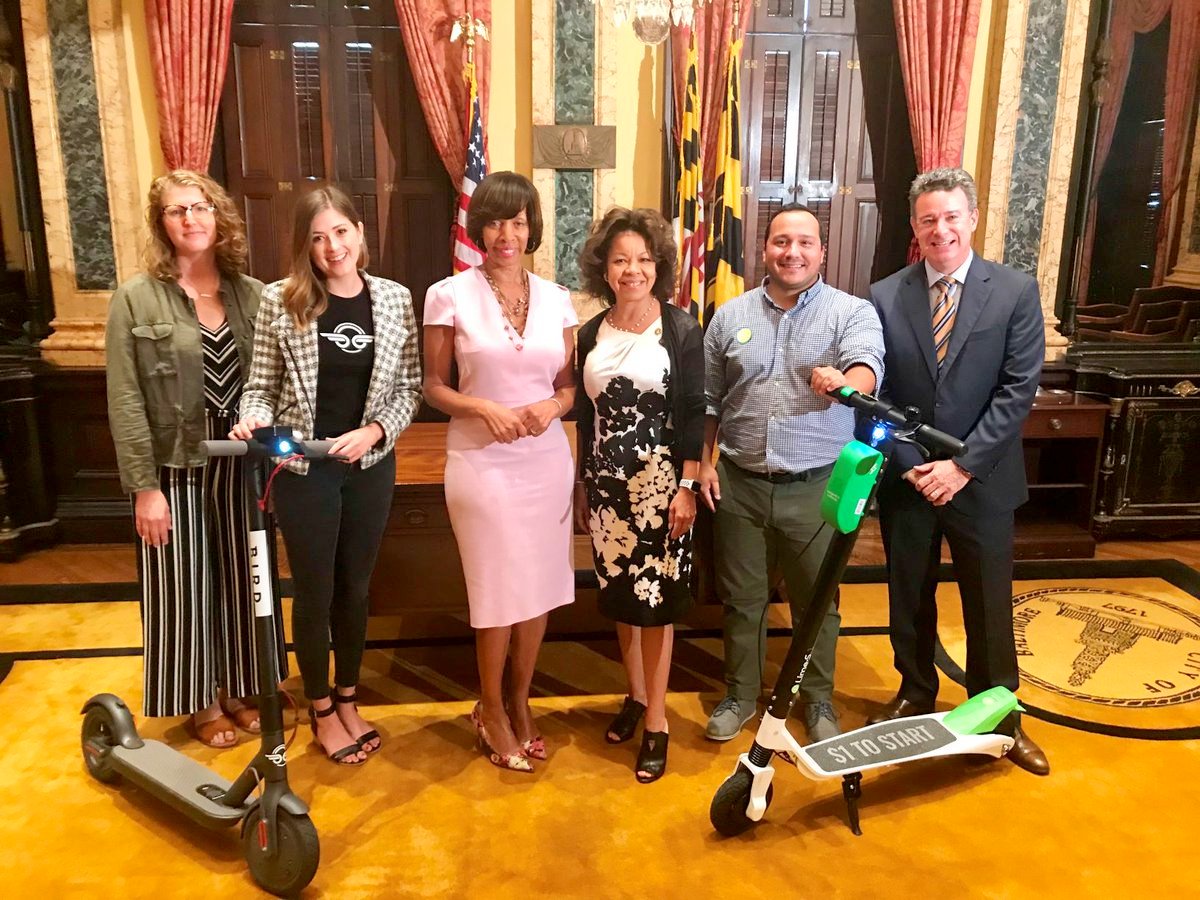