A bill was introduced earlier this year that increases the reporting requirements on lobbyists in Baltimore and, not surprisingly, its main critics have been, well, lobbyists.

Not to oppose Councilman Zeke Cohen’s “Transparency in Lobbying Act,” but to complain that “advocates” are getting around the current lobbying regs.

At a committee work session on Bill 18-0230, that idea emerged in the form of an amendment introduced by Councilman Eric T. Costello.

It expanded the definition of who is a lobbyist.

It would define them as not just people earning $2,500 or more in a reporting period. It would now include people who “make more than one lobbying contact” with a public servant during that time.

As Costello argued for the amendment, two of City Hall’s top-earning lobbyists, Frank D. Boston III and Sean Malone, watched from the audience. 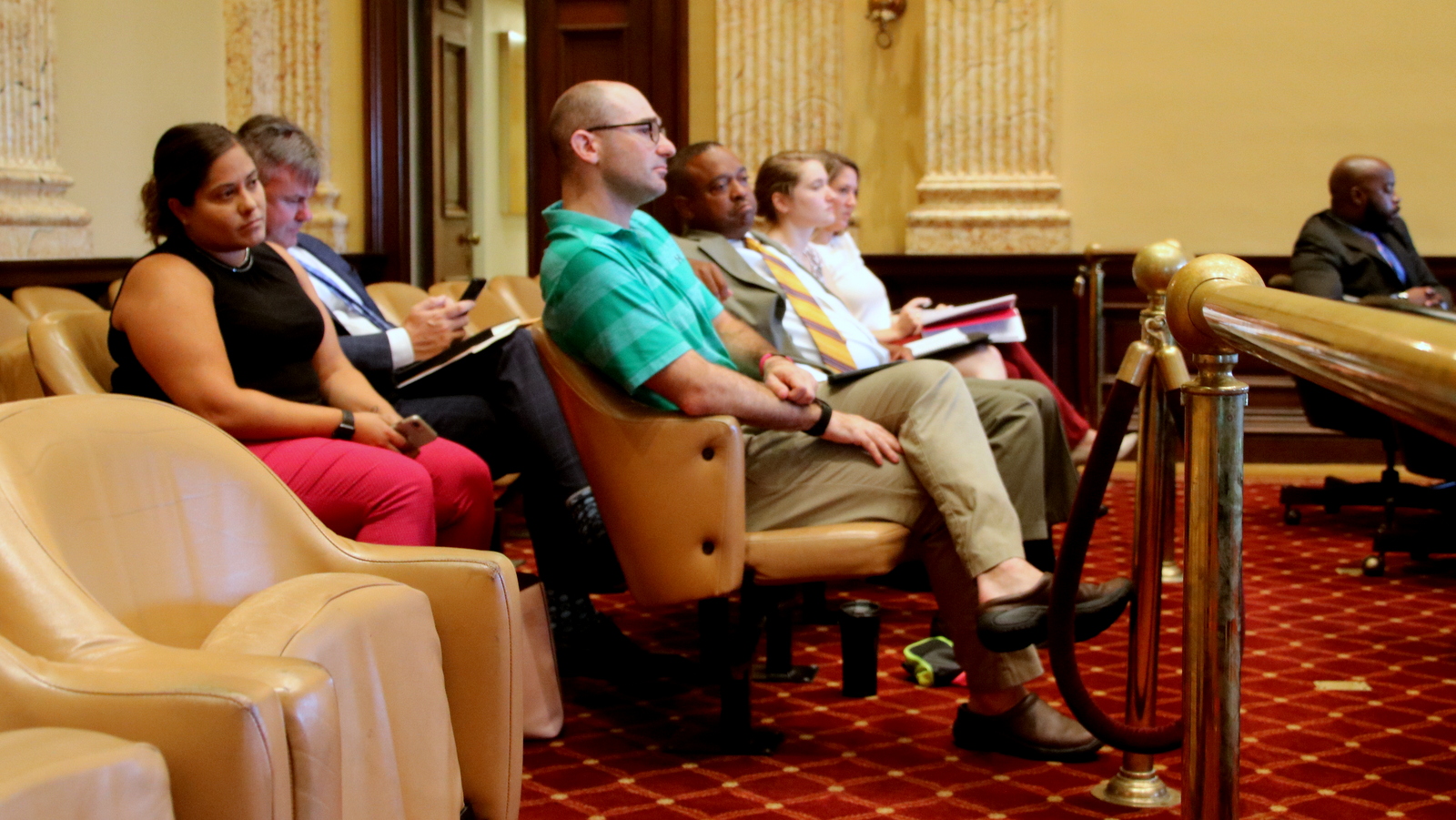 The change was opposed by Cohen and Councilwoman Mary Pat Clarke. And it appeared to give Legislative Reference Director Avery Aisenstark conniptions.

“This essentially wipes out the grassroots groups,” declared Aisenstark, who serves as the staff for the Ethics Board, which maintains lobbying information. “That reaches into a First Amendment issue.”

Cohen said the expanded definition would potentially “capture” people such as, for example, a teacher who speaks twice to a councilman or city bureaucrat about his students’ exposure to lead in school water fountains.

“That’s the only qualification to be needing to register as a lobbyist? They came once. Oops, they came again!” Clarke observed, describing the Costello amendment as “murky” and in need of law department review. 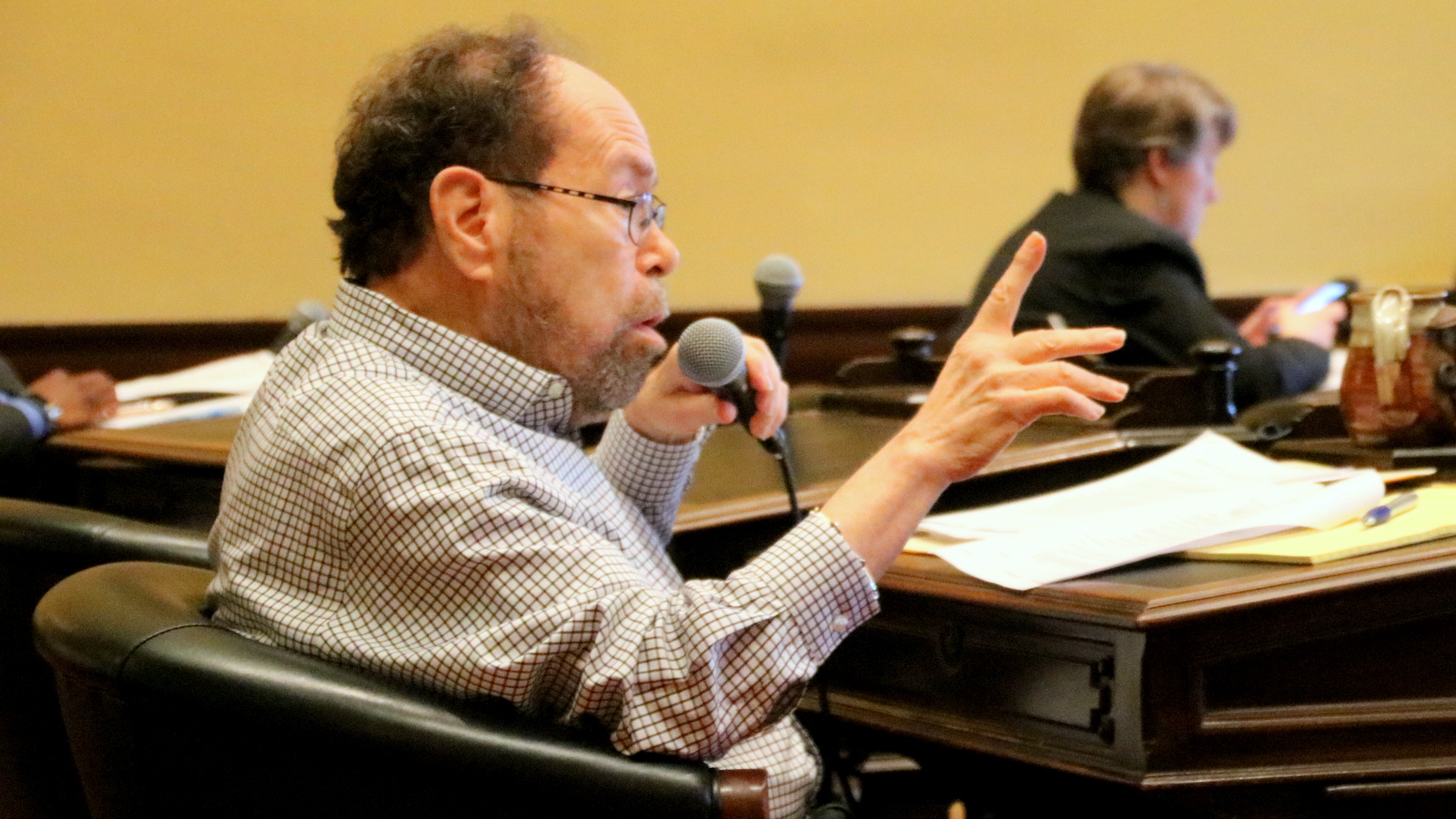 In a back-and-forth with Costello, Aisenstark said at one point, “You’re going to have the votes one way or the other.”

“I’m not clear how you’re presuming we have or don’t have the votes,” Costello shot back.

But apparently, the councilman didn’t have the votes. Costello abruptly withdrew the amendment to gasps from some in the audience.

Then the Judiciary and Legislative Investigations Committee, which Costello chairs, passed the bill unanimously without the amendment.

Costello: Not Aimed at Citizens

Costello made various points in arguing for the amendment, including:

• It was “not intended to [affect] employees who are acting as private citizens who are advocating for something because it’s important to them,” he said, suggesting editing could make that clearer.

• “Let’s make sure that employees who are acting at the direction of their organization – who are essentially acting as lobbyists – are registering,” he said. “I keep hearing this bill is about transparency.”

• The amendment specifically excluded homeowners’ associations and community associations, he also pointed out.

As the bill is currently written, whoever ends up being considered a lobbyist would face some high hurdles.

He or she must affirmatively identify themselves, register with the city, file detailed activity reports and, if they break the rules, suffer a civil fine or a maximum three-year lobbying ban.

Cohen acknowledged that there are people lobbying now who don’t follow the rules, but he said that could be addressed through better enforcement.

Broadening the bill as Costello had proposed, according to Clarke, would confuse citizens and make them afraid to approach city government to ask for help or offer input.

“I don’t want my community associations reading this and thinking they’re somehow covered,” she said.

The committee did make some changes to the bill, which moves now to second reader.

The four-times-a-year reporting requirement was reduced to twice-a-year. (Lobbyists like Malone and an associate of Boston had complained about the hassle and paperwork involved in quarterly activity reports.)

Cohen said he did not object to the tweak.

Another change was to add a date-certain for the online portal that the bill mandates. (Currently, to view activity reports, journalists and members of the public must trudge up to the sixth floor of City Hall and view paper-only reports.)

To address this issue, the committee had summoned a representative from BCIT (Baltimore City Information & Technology, the new name for the Mayor’s Office of Information Technology.)

Presuming the bill moves through the Council without delay and is signed into law by Mayor Catherine Pugh by October, could BCIT manage to get the online portal up and running in 90 days?

Oh no, the representative said, requesting instead “270 days.”

After some discussion, the bill was amended to require a working portal by June 1, 2019. 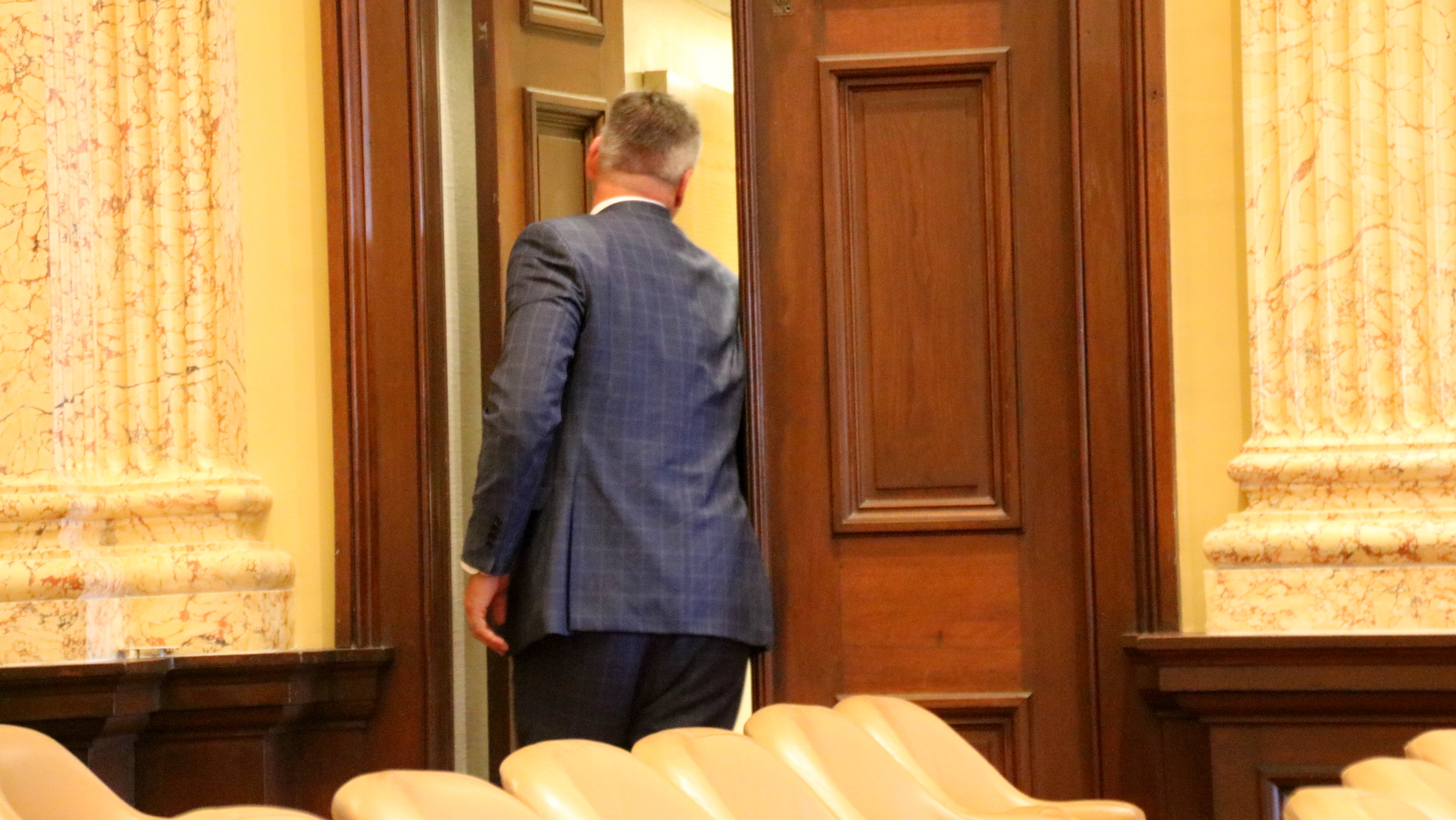 After the vote, Sean Malone follows Councilman Costello into the Council’s back office. (Fern Shen)