In a decision considered unprecedented in Baltimore County, a large-scale development has been disapproved on the grounds that it would negatively impact on the county’s overburdened sewage system.

“As such, the plan will be disapproved solely on this basis,” he concluded in a 27-page opinion posted online Tuesday.

While the long-contested development did not “create” the sewage problems now facing Ruxton, Riderwood, Towson and Brooklandville, it would add to them by relying exclusively on an old and deficient sewer main under Lake Roland, according to the judge.

What’s more, the Bluestem project, proposed by developer Leonard Weinberg and his Vanguard Retail group, would dispose of stormwater runoff inside the 500-acre park, which is owned by Baltimore City but managed by Baltimore County.

The Brew has been writing about sewage overflows at the park, including a large “blow-out” from a manhole that was reported by Baltimore County only after it was disclosed by this website.

The sewer main that spewed out waste in early August feeds into Baltimore City’s own antiquated sewer line that runs down the Jones Falls. During storms, there are regular overflows of waste from the pipe on lower Falls Road that are carried downstream to the Inner Harbor.

“This is Baltimore County’s first acknowledgement that sewage overcapacity is a real problem in the Jones Falls sewershed,” Beth Miller, an architect and member of the Green Towson Alliance, said.

Attorneys and others involved in the case say the implications of the decision could be far-reaching, if upheld by the County Board of Appeals and the Circuit Court. 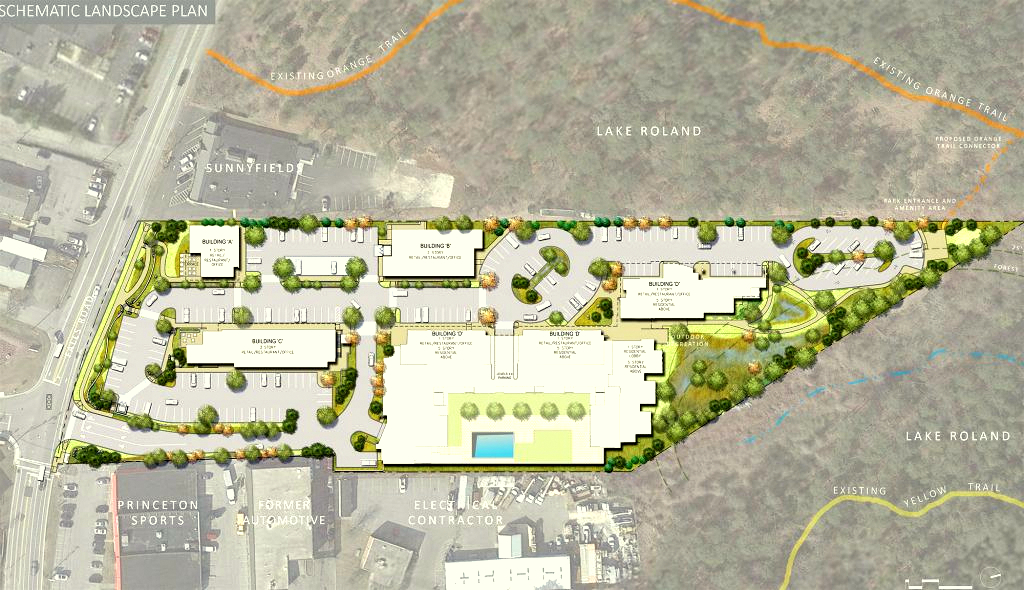 “This is the first time I’m aware of that lack of adequate sewage disposal has ever resulted in a negative decision, so this is significant,” a veteran zoning lawyer noted.

Equally significant, several experts said, was the opinion’s disregard of the county’s Basic Services Map, which did not find sewage capacity around Bare Hills “deficient,” in favor of a consultant’s report and hearing testimony that did find it inadequate.

“The implications for other projects are huge,” said Miller, who presented statistics during the administrative hearings about the impact of widespread construction on county sewers.

The rapid expansion of dorm space at Towson University and the construction of high-rise apartments acros downtown Towson had already put undue strain on the sewers that funnel wastewater into a single 42-inch pipe under Lake Roland, Miller and others stated. 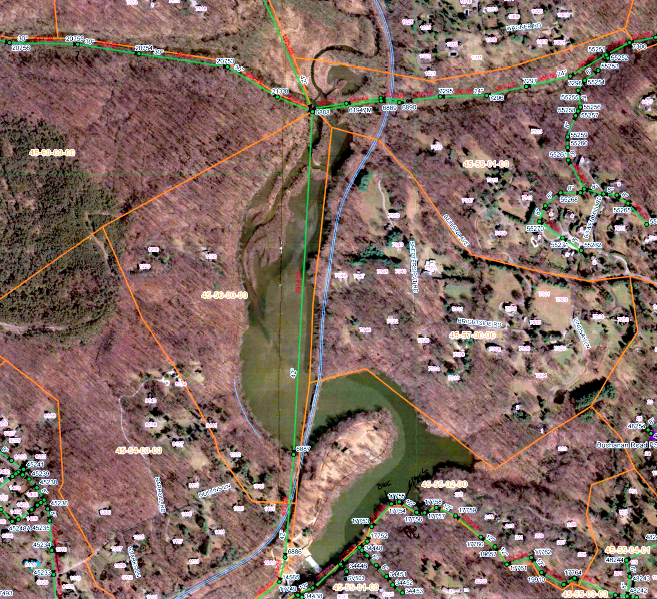 The long green vertical line marks the 42-inch pipe under Lake Roland that Vanguard wanted to use to dispose of sewage from Bluestem Village. (Baltimore County Department of Public Works)

Because the six-acre project was not located in a “sewer deficient area,” as defined by the Basic Services Map, Vanguard’s lawyers, Smith, Gildea & Schmidt, contended that the project should be approved.

A fellow developer, Lawrence Rief, told the judge that retail stores and restaurants were “sorely needed” at Bare Hills.

Beverungen rejected the map and needs arguments and relied on a detailed report done by Rummel, Klepper & Kahl as part of a sewage consent decree between Baltimore County and the Maryland Department of the Environment and the U.S. Environmental Protection Agency.

“This is sobering testimony, especially considering the county’s own Sewer Design Manual unequivocally states that ‘trunk and interceptor sewers shall not be designed to flow at depth exceeding 90%,’” Beverungen wrote. 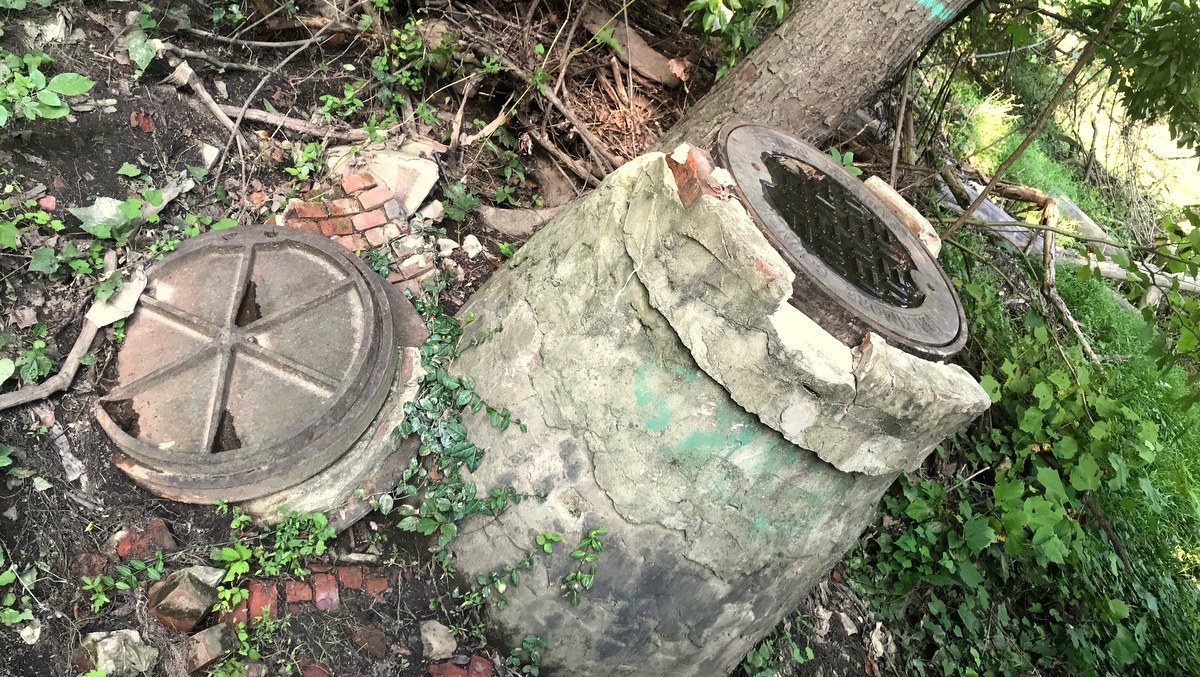 Manhole 6883, which spewed an unknown amount of wastewater into the park in early August. (Mark Reutter)

Equally sobering was RK&K’s finding of 541 defects in the Lake Roland sewer pipe as it tunneled under Lake Roland – “more than any other pipe segment in the Jones Falls watershed,” the judge noted in his opinion.

Pipe defects and overcapacity can lead to many problems, including sewage backups and leaks. As Beverungen wrote, “The county’s own testing shows the levels of E coli in Lake Roland far exceed safe levels set forth in state regulations.”

The RK&K report recommended that the county build a “relief sewer” to address these overcapacity issues, but “there is no evidence in the record to suggest that Baltimore County has undertaken such measures,” the opinion pointed out.

The County Department of Public Works confirmed to The Brew that no major capital improvements are planned for the Lake Roland interceptor sewer, which was built in the early 1950s.

The county, however, is completing a two-mile relief sewer along Towson Run, thereby transferring likely sewage overflows from Towson to Lake Roland Park during heavy storms.

Controversial from the Start

In 2016, Vanguard purchased a sleepy corner of Bare Hills east of Falls Road to build its upscale village.

Almost immediately, the project ran into criticism that it would increase traffic, reduce local open space, encroach on a protected stream and overburden the park with stormwater runoff. On its own webpage, Bluestem presented itself as an environmentally friendly model community.

During the ensuing three-year fight, some residents called on the county to buy the site and turn it into a western entrance to the park, while then-2d District Councilwoman Vicki Almond said she didn’t think the project would hurt Lake Roland at all.

Vanguard’s Weinberg did not respond to a request for comment. The developer has 30 days to appeal the decision to the County Board of Appeals.