A crowd gathered yesterday at a scenic high point in Baltimore, the Druid Lake reservoir, to see a spectacle:

A flyover by the Navy’s Blue Angels and the Air Force’s Thunderbirds to honor first responders and health care workers working during the coronavirus pandemic.

There were kids and parents, yoga practitioners and military veterans, bike riders and roller skater and, yes, some frontline healthcare workers on hand as the two squadrons flew in tight formation, leaving a streak of white behind.

“You do have a little – whew! – feeling when you do this work because, yeah, there’s some risk involved so, I guess I’ll take this,” said Pete Meredith, a Johns Hopkins Hospital nurse who now cares for Covid-19 patients.

After the aircraft roared north towards Towson, circled around Timonium and sped back towards the downtown skyline and across southeast Baltimore, the crowd applauded.

As they began to disperse, a different sound reached the park from West Baltimore – the low and persistent drone of the so-called “spy plane.” 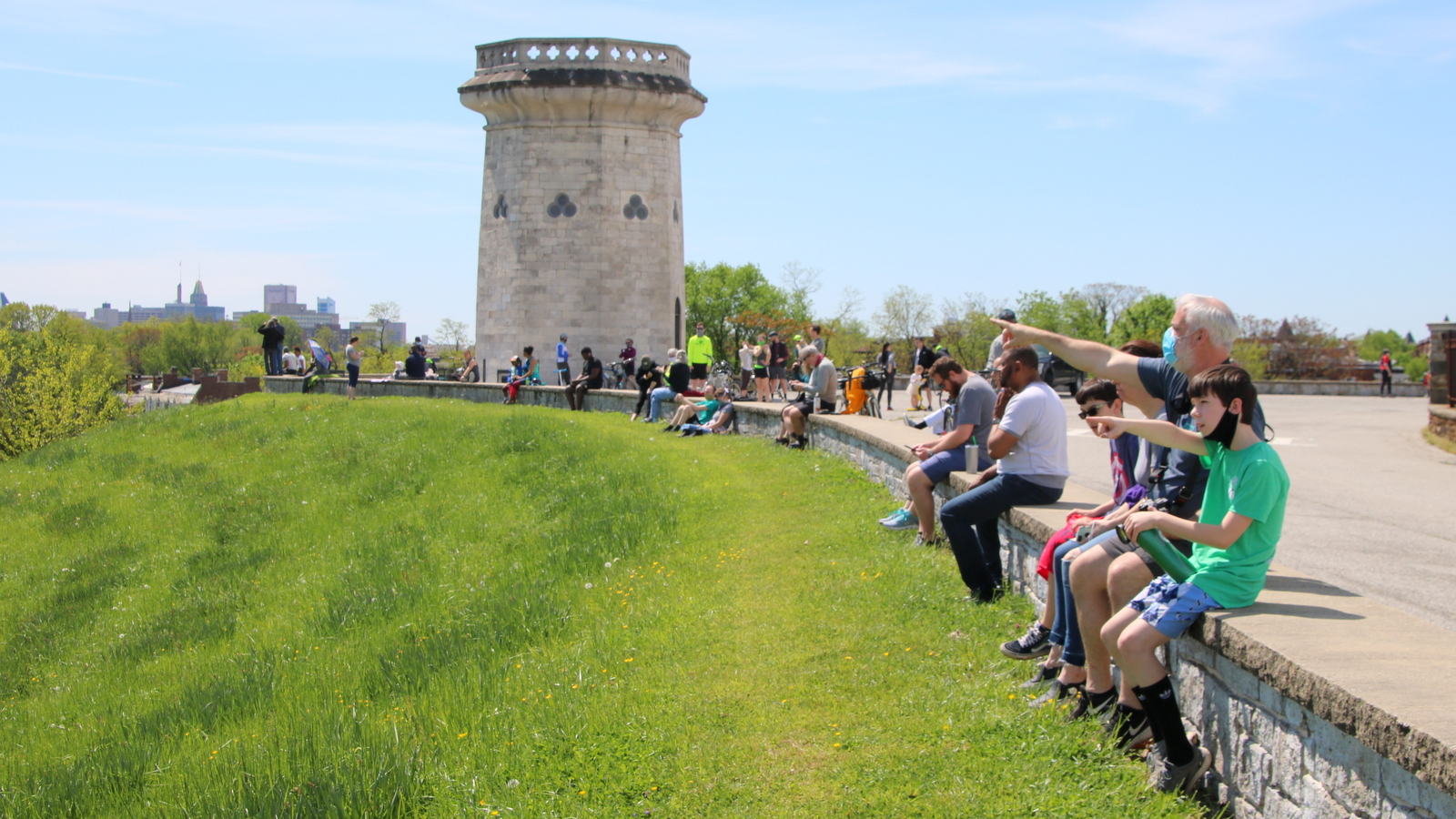 As a crowd saw the Blue Angels and Thunderbirds from Druid Lake, the sound of the Cessna surveillance plane could also be heard. (Fern Shen)

Saturday was the second day of the Police Department’s deployment of surveillance planes, which will fly over Baltimore up to 84 hours a week, recording anyone and anything within the range of the planes’ array of cameras.

Backed by Mayor Bernard C. “Jack” Young and rather reluctantly by Police Commissioner Michael Harrison, the six-month pilot program was promoted as a tool for reducing Baltimore’s persistent violent crime.

The spy plane initiative moved forward in spite of intense public controversy, with some arguing it was worth a try given the city’s record-setting homicide rate, and others arguing against handing an unproven tool to a law enforcement agency with a track record of corruption and abuse.

(The American Civil Liberties Union of Maryland, which is challenging the surveillance program on constitutional grounds, was unable to persuade a federal judge to stop the AIR flights from commencing.)

After the six Air Force F-16C/D Fighting Falcons and six Navy F/A-18C/D Hornet jet fighters flew off into the horizon, spectators hoisted themselves back on bikes or headed to their cars.

Among them was Jack Lancaster, an Army veteran from Catonsville, who applauded officials for mounting the spectacle.

“We needed a little cheering up, and the doctors and nurses really probably needed it,” he said.

Not all healthcare workers agree. Baltimore Beat journalist Jaisal Noor found many who regarded the jet display, part of the Trump administration’s “America Strong” initiative, as a waste.

“Instead of spending $60,000 per flight hour on a showy attempt at solidarity, please spend that money housing homeless and incarcerated people in safe places where they can be socially distanced,” Kate Dunn, a registered nurse in Baltimore, told Noor.

(In response to such criticism, the Pentagon has said that already-budgeted money was used for the multi-city spectacle and that air-time went towards the pilots’ required training hours.) 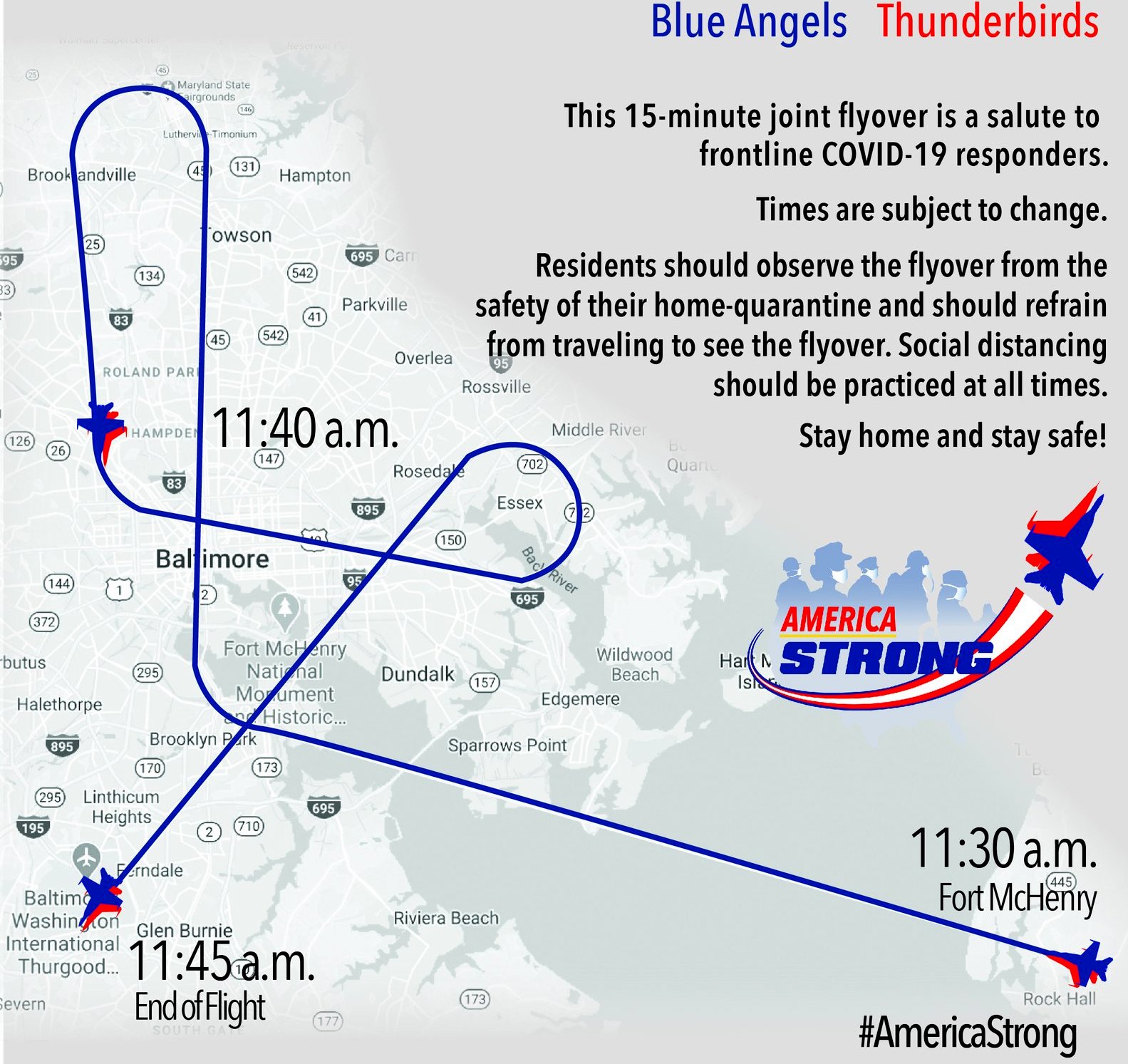 Path of the 5/2/20 flyover of Baltimore by Navy and Air Force military jets. (@BlueAngels)

As for the route, organizers of the photogenic flyover have said it was chosen in order to pass by the city’s hospitals, where the staff is caring for critically-ill highly infectious patients during the pandemic.

Johns Hopkins Hospital, for instance, sent photos and videos to the media showing masked and gowned staffers at an outside Covid-19 testing station, watching the jets streak over the building. 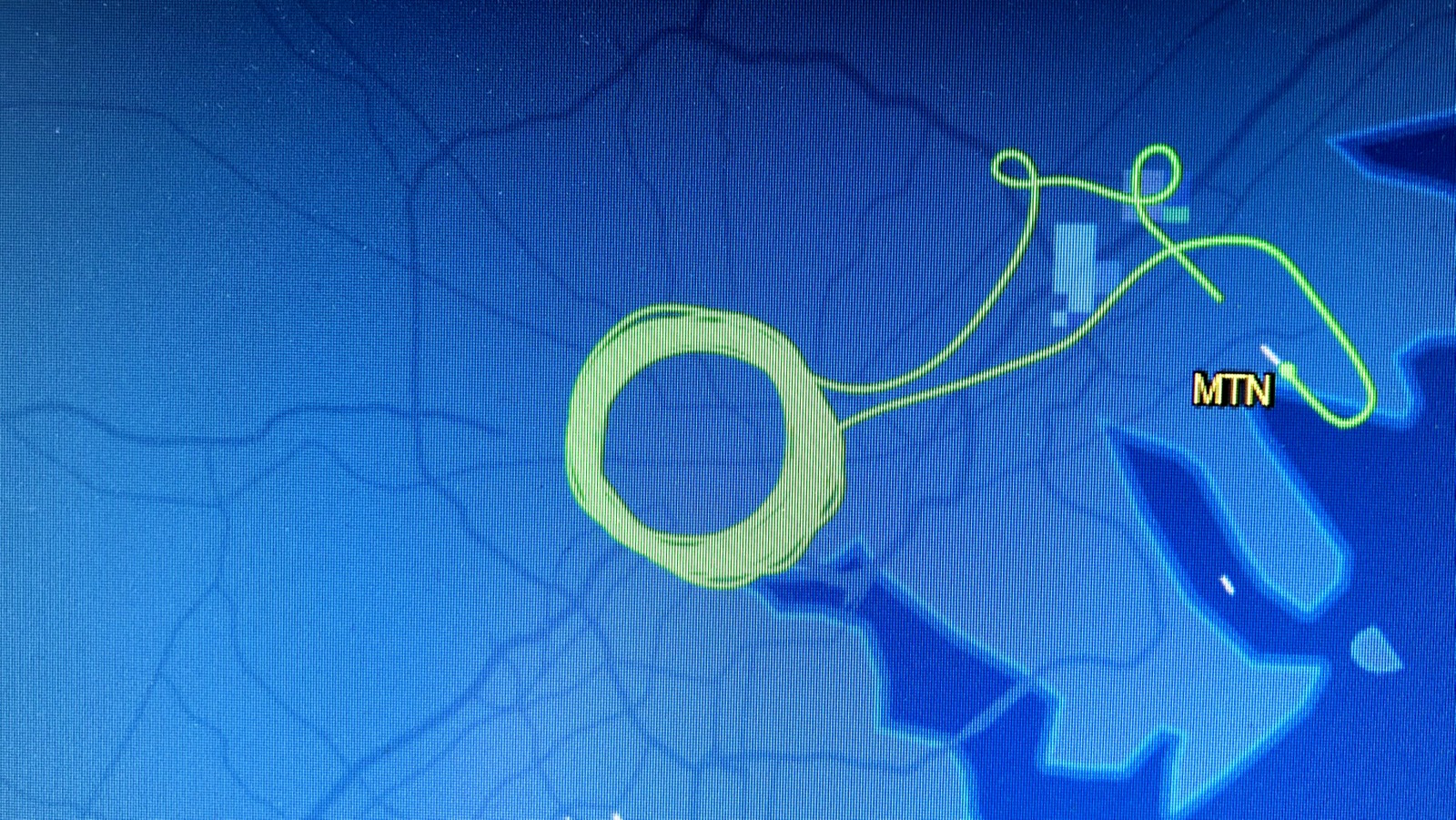 The path of the Baltimore Police aerial surveillance plane as it flew over the city on Saturday, May 2, 2020. (flightaware.com) 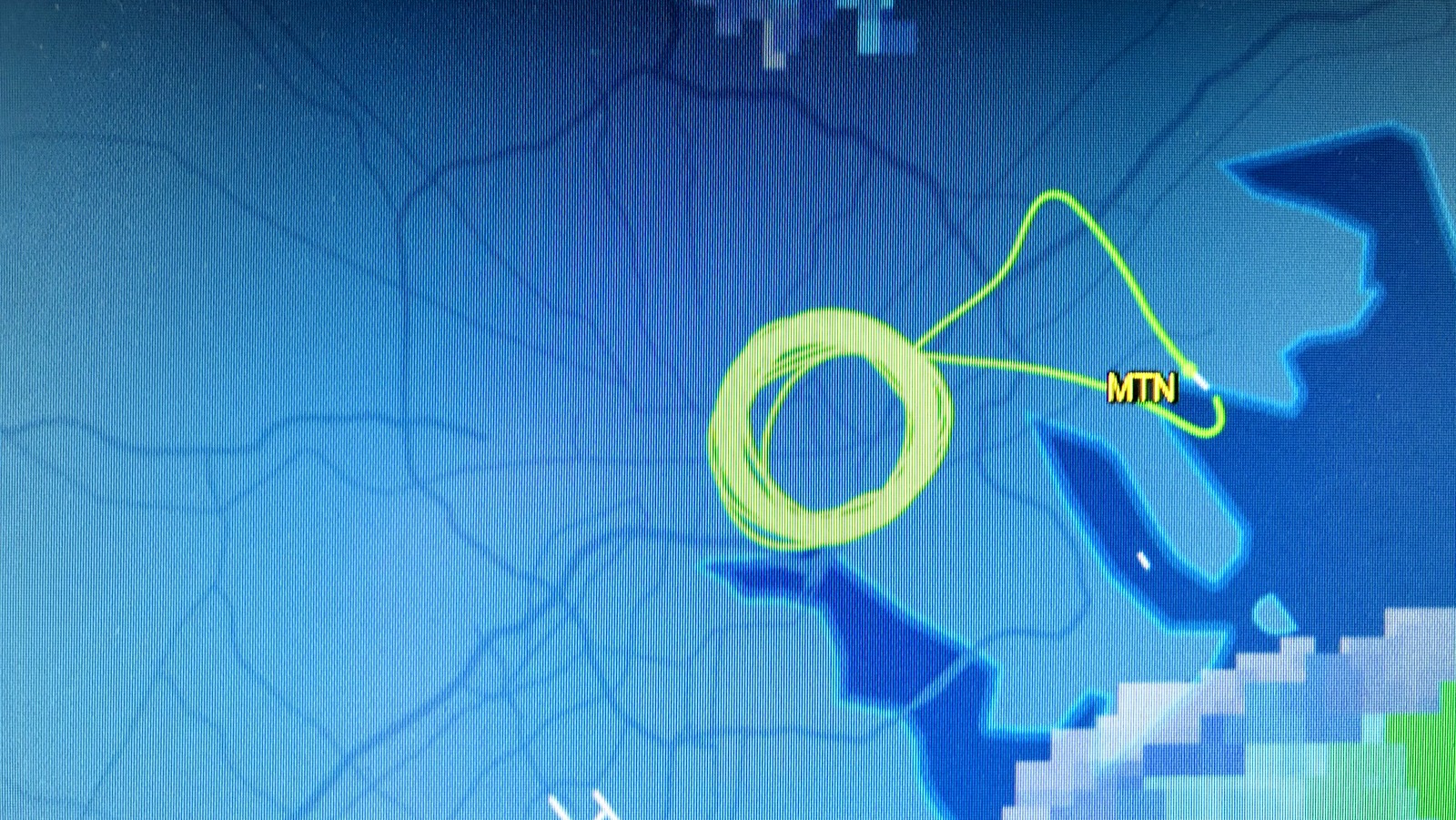 But it was hard yesterday to ignore the contrast in both geography and messaging between the brace of sleek military craft and the single-engine Cessna.

The Blue Angels and Thunderbird squadrons raced up and down the north-south central spine of the city and crossed downtown and southeast Baltimore – an area coinciding with the so-called “White L” where the population is largely white and relatively affluent.

The surveillance plane, meanwhile, kept droning for hours, around and around, West and East Baltimore, the heart of the city’s so-called “Black Butterfly.”

A future without this deep social divide – one side being saluted, the other being surveilled – felt far away, not visible anywhere on a beautiful spring day. 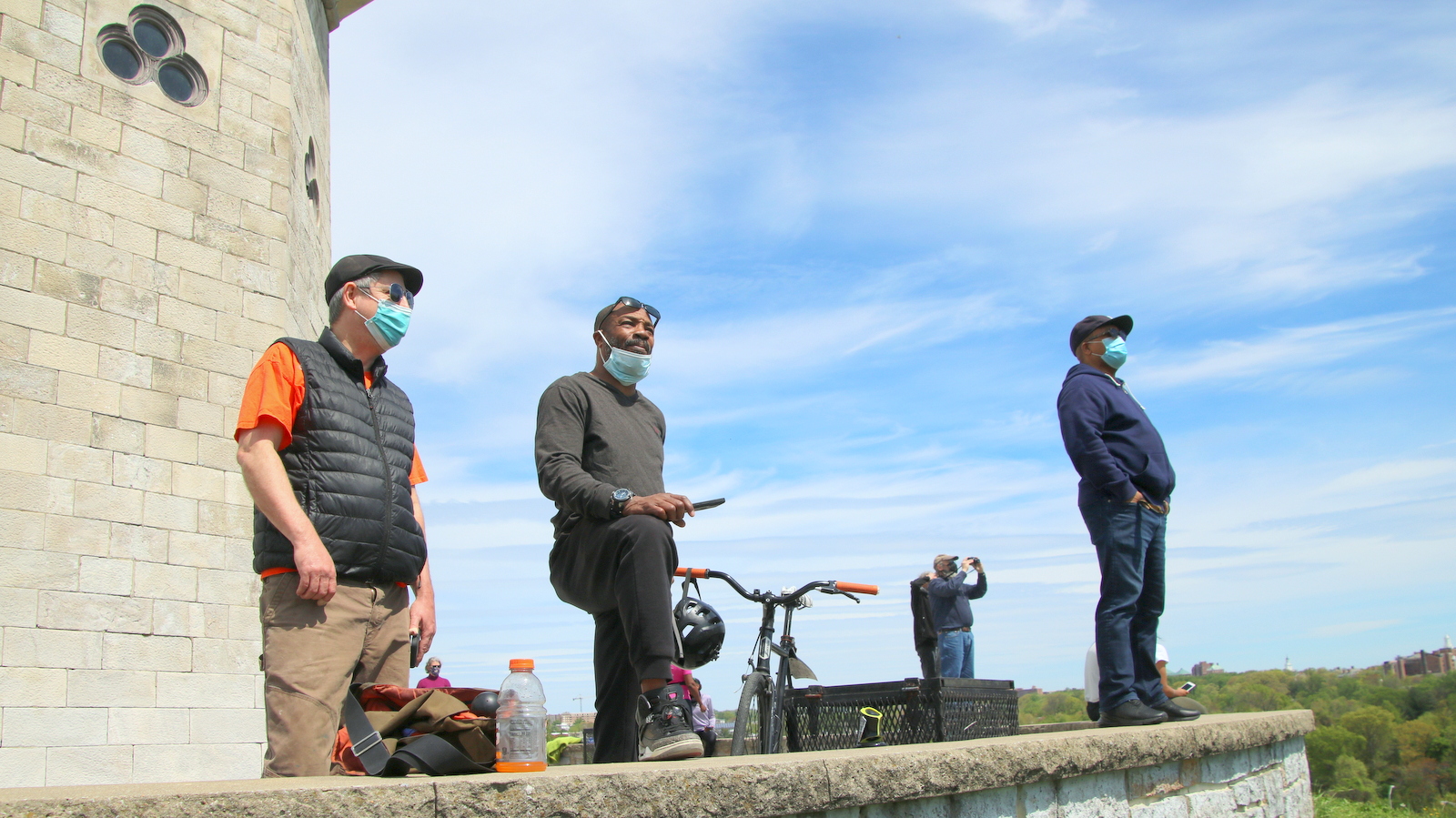 Pete Meredith and Sean Monroe (left and center) watch the squadrons of Blue Angels and Thunderbirds from beside the Moorish Tower. (Fern Shen)