A woman who purchased a tax sale certificate for a Baltimore property through the Southwest Partnership (SWP) in 2019 discovered she was charged an improper fee that was not disclosed in her original agreement with the nonprofit.

C. Nicole Orr complained about the fee in emails sent to SWP just days before a report by Baltimore’s Inspector General disclosed that the organization was charging developers a fee to acquire properties with tax liens.

After paying SWP $6,101.07 to obtain a tax lien certificate for a house in the Hollins Market neighborhood, Orr said, the nonprofit took a percentage of the interest.

“I want to see the total interest paid for this property [when it was redeemed], not anything made up from SWP,” Orr wrote on June 7 to Anthony Scott, the nonprofit’s executive director, adding, “Tony, this is not a good look.”

“Looking back in our records, you’re right. The original MOU you signed did not mention this, however in subsequent years it does,” Scott wrote back. “We will send you [a] check for the interest we took. Based on what we paid you, we would owe you $285.74.

Orr, a small developer who lives in Calvert County, owns a business in Baltimore and rehabs and rents out houses. She said she had paid $6,101.07 for a lien on 1013 West Lombard Street as well as a $1,000 “legal deposit” to SWP.

But looking back at her records recently, she discovered she was shortchanged by a few hundred dollars when the certificate was redeemed.

“They had money of mine all this time while they were under investigation. That’s what I don’t like,” she said, further questioning why the Southwest Partnership’s name was on the tax lien and not hers.

“They didn’t put up any of the money. I put up the money! Where am I in this process?’” Orr told The Brew. “Why should Southwest Partnership be entitled to a portion of the interest for a tax sale certificate?”

SWP sent Orr the accounting below when they paid her back the $285 she was owed, but she still has questions.

“They are now trying to clean it up by issuing checks a year later,” she said.

Information that Nicole Orr received after she questioned Southwest Partnership’s handling of her tax lien purchase.

Orr said she knows that her experience buying a tax lien property through SWP represents only a small part of the issue highlighted by the IG’s report.

But Orr faults the city and the nonprofit for a murky, non-transparent process that she believes merits further investigation.

“It speaks volumes about the organization and whether or not they’re going to be able to lead the revitalization of West Baltimore,” she said. “It’s a mess. How much money has been accumulated? Look at West Baltimore. What has been done there?”

Orr said she believes Seipp “is good-hearted” but that the tax lien program “got out out of hand.”

Orr said she believes Seipp “is good-hearted and really wanted to do what was right for those neighborhoods,” but that the tax lien program “got out out of hand.”

“What has transpired was wrong. SWP should have accepted it and been quiet about it,” she said. “Why attack the IG when she’s not wrong? Because, you did do this.”

Housing Commissioner Michael Braverman, who was suddenly terminated last August for unexplained reasons, had been aware of the arrangement.

He says that Cumming’s investigator misunderstood a pilot program aimed at reducing the number of vacant houses by steering abandoned properties to competent developers.

Developers were asked to reimburse SWP only for legal costs and taxes incurred in securing a tax sale certificate from the housing department, he asserted.

Whether the arrangement represented innovative public policy or preferential treatment has been widely debated this week.

Many defended the Southwest Partnership, a nonprofit formed in 2014 to improve housing conditions in the southwest area of Baltimore. The coalition consists of seven neighborhood associations and six anchor institutions.

Others applauded the IG for calling out a practice that underlines systemic flaws in the city’s approach to tax delinquent properties and community development. 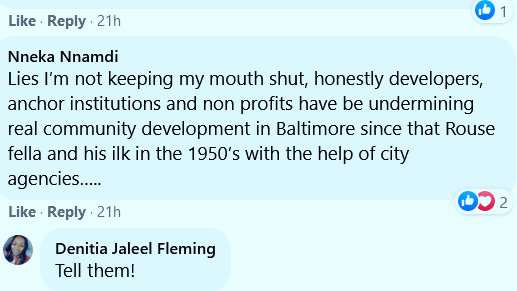 Meanwhile, the IG’s full 125-page investigative report, which might clarify the matter, remains under wraps.

The city Law Department refused a Maryland Public Information request by The Brew to release the report as well as a draft memorandum of understanding between the housing department and SWP that was terminated after Cumming’s staff got wind of the document.

Chief Solicitor Hilary Ruley said the report concerns a personnel matter, is “investigatory” in nature and was prepared “in anticipation of possible litigation” – all of which, she said, exempts the report from public inspection.

She also refused to release the IG’s “Management Alert” issued to city officials days before Braverman’s termination because “if disclosed, [it] could chill witnesses’ desire to come forward with information.”

– Mark Reutter contributed to this story. He can be reached at reuttermark@yahoo.com.