Baltimore is set to pay $96,000 to settle a federal lawsuit by four people whose Harlem Park neighborhood was cordoned off and locked down for six days following the 2017 shooting death of detective Sean Suiter.

The suit, filed by the ACLU of Maryland, alleged that the city violated residents’ constitutional rights when police shut down an area in West Baltimore including 100 houses, a church and two stores.

Officers positioned around the area’s perimeter stopped residents, asking them for identification and preventing them from entering their own homes unless they showed it.

“It felt like martial law,” one of the plaintiffs, Lauren Holmes, said at the time.

Today’s announcement that the city would not only be paying each plaintiff $24,000, but formally apologizing for its actions and agreeing to a number of non-monetary terms made Holmes jubilant.

“I appreciate the apology from the city and hope that going forward they don’t have to issue any more apologies for this type of incident,” she said in a statement released by the ACLU.

Under the terms of the settlement, the Baltimore Police Department is required to adopt and enforce policies aimed at ensuring that nothing similar happens again:

• Crime scene boundaries and durations must be “tied to the nature and facts of the crime being investigated, independent from the identity of the victim and the demographics of the neighborhood.”

• Any searches of residences within a crime scene must be completed within four hours, unless additional time is justified and authorized in writing by supervisors.

• Residents and their guests may not be prohibited from accessing their residences unless there is an emergency need to preserve evidence in the residence or an immediate danger to the resident or guest, such as an active shooter situation.

• Specific written justification is required for including, within a crime scene boundary, the entrance to any residence that is not itself the location of the crime.

The settlement also gives the plaintiffs the ability to monitor BPD’s adherence to these policies to make sure they are enforced, and requires the department to  expunge any records created during the lockdown that relate to the plaintiffs or others in their household. 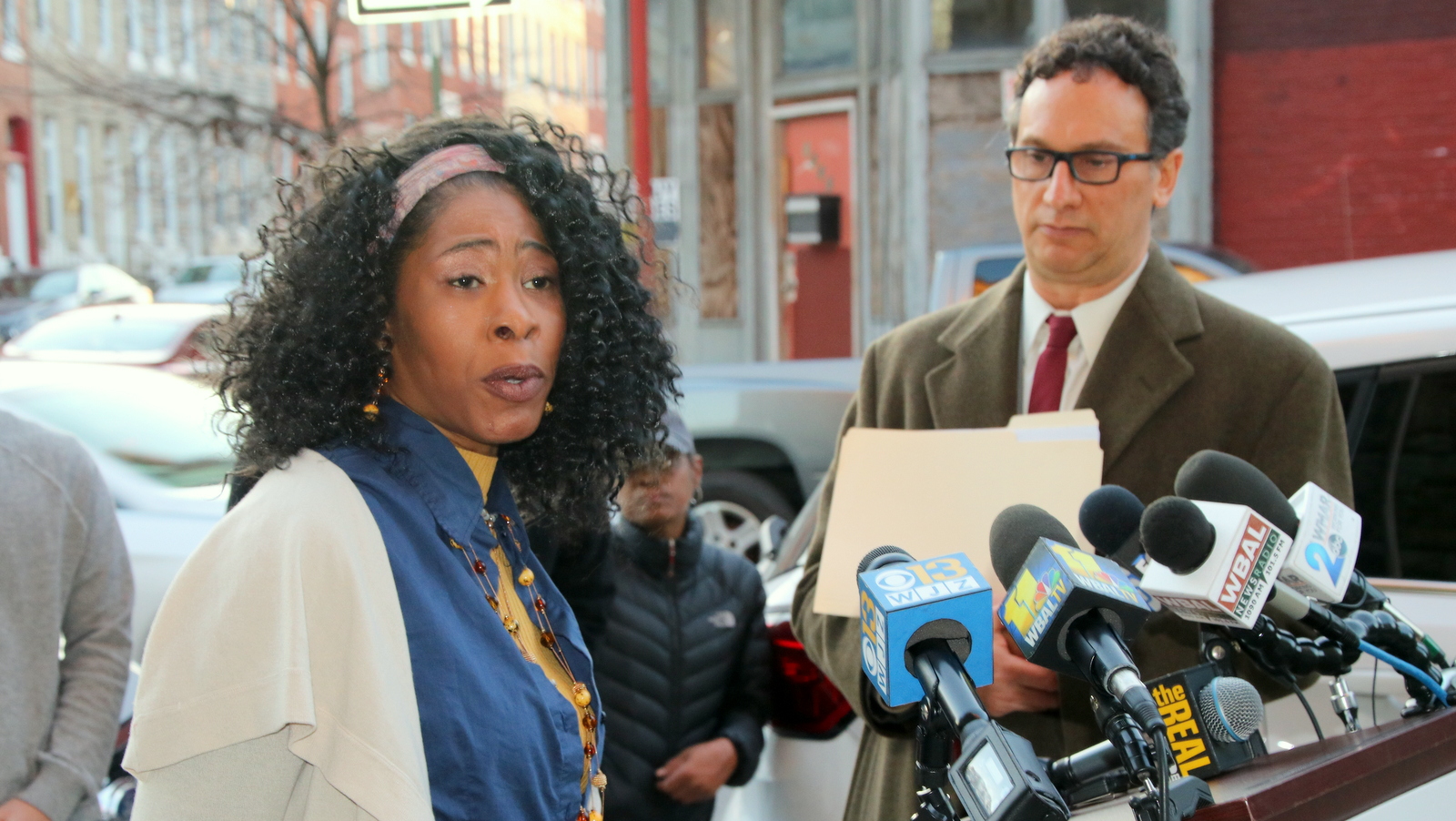 Harlem Park resident Lauren Holmes at the lawsuit’s announcement. With  her was the ACLU’s David Rocah. (Fern Shen)

“On behalf of the City of Baltimore and the Baltimore Police Department, I would like to express our sincere regret and apology for the disruptive events that you and your family experienced.”

“Amid the investigation of the tragic death of Detective Sean Suiter, the BPD men and women tasked with maintaining the crime scene perimeter were not guided by adequate supervision to reinforce constitutional requirements for stops and searches,” said Harrison, who was not police commissioner at the time.

“The result was a protracted police presence that was not aligned with any national best practice for investigations nor any true community policing model,” he continued.

The Board of Estimates is scheduled on Wednesday to approve the payment to Holmes and the other plaintiffs – Nicole Lee, Luella Lawson and Juaqueta Bullock – along with the terms outlined in the agreement.

While settlement of the lawsuit, which described the lockdown as “flagrantly illegal” and racially discriminatory, brings some closure for residents who protested it, it leaves the November 15, 2017 shooting of Suiter a mystery.

The 43-year-old detective was found with a bullet wound to the back of his head from his own service weapon a day before he was scheduled to testify before a grand jury looking into the corrupt Gun Trace Task Force.

Police never made any arrests in the case. Initially ruled a homicide by the state medical examiner, Suiter’s death was eventually explained as suicide by an independent board convened to review the case.

Harrison, citing a review of the case by the Maryland State Police, declared the investigation closed. He then walked the statement back, saying he “misspoke” after prosecutors said they were still investigating the matter.

Suiter’s family, meanwhile, continues to reject the suicide conclusion. His death is classified as a homicide.