When Jackson Stinar took a job as a barista with Cunningham’s Cafe & Bakery in Towson earlier this year, he did what he routinely does with a new school or employer:

He mentioned he has epilepsy that is well controlled with medicine, noting also that he could potentially have a seizure.

On May 22, Stinar texted supervisors to say he had a seizure – and didn’t feel well enough to work that day.

“Good morning Jackson, unfortunately I’m going to have to move on from employment,” she wrote. “I don’t see this as a good fit. I appreciate your time and wish you all the best.”

Stinar, who by this time was a line cook and said he had worked there for two weeks with no complaints, was stunned.

“It caught me off guard completely,” said the 22-year-old Towson University student. “I’d never experienced someone treating me like that because of my epilepsy.”

The Brew got no response from its call to the restaurant, which earlier this year had been undergoing a change in management to the Atlas Restaurant Group.

Baltimore-based Atlas, which operates upscale eateries locally and in Texas and Florida, has flourished in recent years, but also attracted attention for a dress code criticized as racially discriminatory.

A spokesman for Atlas, which announced a partnership with the Towson restaurant in late April “effective immediately,” said the company was not involved in Stinar’s termination in May.

Despite that announcement, the partnership deal was “not finalized and our management teams were not on property,” Joe Sweeney, director of marketing and public relations at Atlas, said in a statement to The Brew.

“It was well known in the cafe that we were owned by Atlas – we were told, ‘stay off your phones, the Atlas people will fire you if they see you on them,’” he said.

“They had us come in for a paid thing for an hour and a half – they showed us a slideshow about the Atlas core values.” 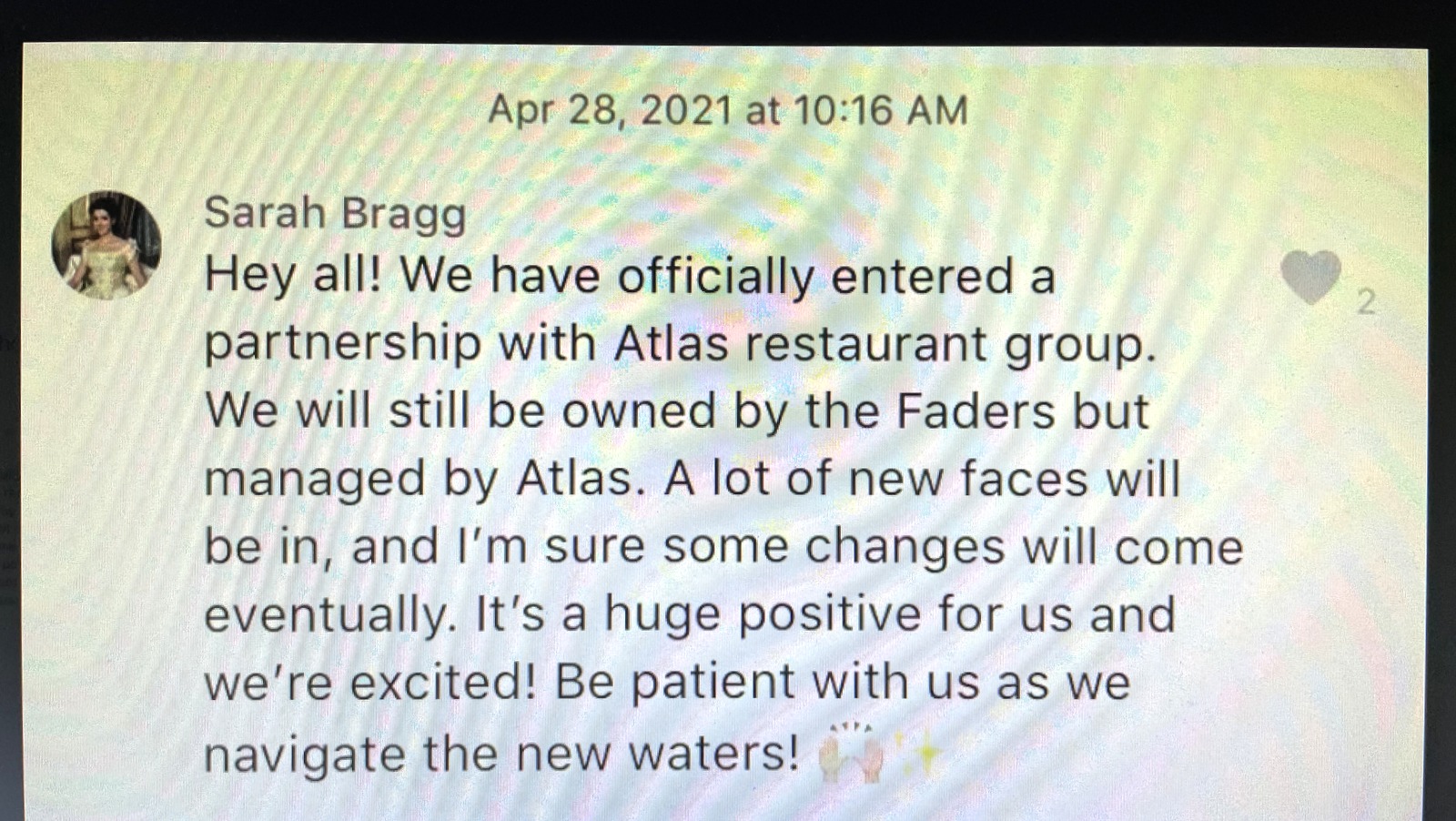 April 28 text from a Cunningham’s manager saying the restaurant had entered into a partnership with Atlas and would be managed by them.

Asked who, then, should be held responsible for Stinar’s firing, Atlas’ Sweeney suggested, “Call MileOne.”

Reached by phone, Steven B. Fader, MileOne Autogroup CEO, said he was “disturbed” to learn of the incident.

He said MileOne wasn’t involved and that he would look into what corporate entity owned and managed the restaurant at the time. Fader’s executive assistant called hours later with the entity’s name: Cunningham Kitchen, LLC.

“There was disciplinary action taken against the manager,” said executive assistant Stephanie Magaha, confirming that the person who fired Stinar had herself been fired. “It wasn’t the right move on her part. It was unfortunate.”

Asked to explain the involvement of Fader, whose MileOne corporate office is in the same 1 Olympic Place building as Cunningham’s, Magaha said he “is a partner personally” in the restaurant.

Asked if Cunningham Kitchen had any message for Stinar or wanted to apologize, she said she believed a manager had done so at the time.

Protected Under the ADA

What happened to Stinar took him aback, but it is an all-too-familiar story to Allison Nichol, director of legal advocacy for the Epilepsy Foundation.

“It’s very common,” said Nichol who gets multiple calls every day from around the country from people who have experienced discrimination because of their epilepsy and notes “the Number One category is employment.”

Nichol said the kind of bias that Stinar experienced is unwarranted, illegal and often personally devastating.

“What happened to this young man will be with him always,” she said. “I hear grown men cry [when] talking about losing their jobs of 25 years because they had a diagnosis of epilepsy. It takes a piece of you. It makes you feel small.”

Almost three million people in the U.S. have some form of epilepsy, and about 200,000 new cases of seizure disorders and epilepsy are diagnosed each year, according to the U.S. Equal Employment Opportunity Commission.

“Epilepsy carries a lot of stigma. That’s why we have a federal civil rights law”  – Allison Nichol, Epilepsy Foundation.

Anti-epileptic drugs successfully prevent seizures in the majority of people who take them as prescribed.

Seizures can be completely controlled in 50% of individuals with epilepsy for substantial periods of time, while another 20% experience a significant reduction in the number of seizures, the EEOC says. Some people go many months and even years, without a seizure.

Nichol said people with epilepsy need to recognize that they have legal rights and employers need to get educated about seizure disorders “and stop and think” before making assumptions about what a person with epilepsy can or can’t do.

“Epilepsy carries a lot of stigma. It can make people very uncomfortable. That’s why we have a federal civil rights law,” she continued, noting that epilepsy is a protected class under the Americans with Disabilities Act (ADA).

The ADA requires an employer to make a reasonable accommodation for a known disability unless to do so would impose on them an undue burden.

• “Epilepsy in the Workplace and the ADA” by the EEOC.

Nichol said the law is “very balanced” and would not require employers to retain, say, someone with a documented history of multiple unexplained absences.

But that wouldn’t apply in cases where an employee wasn’t on the job long enough to make for a justifiable dismissal, she said.

Stinar, she said, appears to have had “every right to ask for a day off.”

Hired Back with Apologies

Cautioning that she couldn’t formally comment on Stinar’s particular case, Nichol said it nevertheless appears to mirror the many ADA violations she encounters, including what happened after he was terminated:

The supervisor who fired him sent a second text saying that she did not do it because of his medical condition.

“Just to make it clear, Jackson, never did I say your disability was a issue,” she wrote, according to a screenshot provided by Stinar.

“Unfortunately from the couple of days that we had you here its just your performance was not a good fit for the Cafe.”

Nichol said it is common for employers, frequently “a higher-up” supervisor, to pop up with a subsequent explanation for the firing in an attempt to hide the discrimination.

In yet another text, a different restaurant supervisor told Stinar he had actually been performing “incredibly well.”

The manager apologized, saying he “should not have been terminated” and asking him to come back. 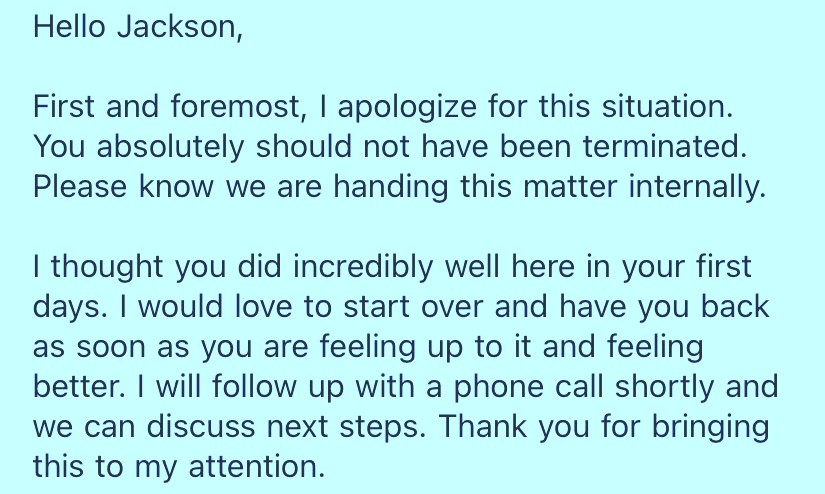 Manager’s text to Jackson Stinar apologizing for his firing and asking him back to the cafe.

After a week or two to think about it, Stinar says he went back to work at Cunningham’s, thinking he would “stick it out til the end of the summer.”

“I need change in my pocket for school in September,” the sports management and business major said.

In late July, supervisors offered him a chance to work in Perennial, the high-end Atlas Group restaurant that had opened upstairs from Cunningham’s. He said he jumped at the chance.

“It was more money and the hours were better,” he said.

Sitting down with executive chef Jay Rohlfing, Stinar said they discussed his hours and his epilepsy. He ended up working a shift that started and finished earlier than the others. Going to bed early helps him get the deep sleep and rest he needs to prevent seizures.

Stinar said he was diagnosed with epilepsy at the age of 10 but hasn’t had a severe seizure for the past decade, thanks to medications.

He described the seizures, which he had been experiencing recently “maybe once every two weeks,” as mild.

“My whole body will clench up for, like 10 seconds and then I’m fine, but a little wiped out the next day,” he said.

In Stinar’s view, the kitchen prep work he was doing at Perennial was going well until earlier this month when Rohlfing criticized his work.

“I understand you have epilepsy, but that doesn’t mean you have to work less than the others,” the chef said to him, as he recalls it.

The chef berated him for missing shifts. Stinar says he’d been absent, with permission, for one full day (because his car needed repair) and one half-day (to attend a memorial service for a friend).

Questioning the mention of his epilepsy, Stinar said Rohlfing’s criticism was harsh and undeserved. He walked off the job and never went back.

Reached by The Brew, Rohlfing disputed Stinar’s account, saying, “That’s not how I saw the interaction at all.”

Referring a reporter to the Atlas Human Resources Department, the chef said he could not comment further.

“I would only say, in no way would I discriminate against him” because of his medical condition.

“That’s not how I saw the interaction at all”  – Chef Jay Rohlfing, Perennial restaurant.

Asked to comment, Atlas spokesman Sweeney said, “Every effort was made to accommodate the former employee and his unique work preferences,” but despite Rohlfing’s “best efforts and sensitivity to the situation, the employee abruptly quit.”

“Our hope would have been to help this employee,” Sweeney added.

But to Stinar, management again invoking his epilepsy was the last straw.

“It was the second time I’d experienced this from somebody in this building. I figured, if this is a thing in the culture here, I didn’t want to be a part of it, no matter how much you pay me, no matter how fancy the place is.”