But earlier in the week, Health Commissioner Letitia Dzirasa was on the defensive, grilled by City Councilman Isaac “Yitzy” Schleifer about why the city’s vaccination rates lag behind the state’s and those of some other jurisdictions.

“This is very concerning, considering that we had more mass vaccination sites, hospitals, pharmacies and external partners vaccinating than in any other jurisdiction in Maryland,” Schleifer said, at a meeting of the Rules and Oversight Committee he chaired.

“Why are our numbers lagging?” Schleifer asked.

State officials this week were reporting 79.6% of the adult population has had at least one dose of the vaccine, while the comparable rate for the city stood at 65.4%.

In Baltimore County, Schleifer said, there is a 2% spread between the percentage of Black residents and white residents who are vaccinated. For the state the spread is 6%. But for the city, he noted, the spread is 18%.

Responding, Dzirasa said she was “very proud” of the Health Department’s efforts to get the vaccine to residents, given the wide disparities of income, life expectancy, etc. in a majority-Black city marked by decades of “racism, poverty and practices of exclusion.”

“Baltimore city is unique,” she said.

Schleifer also complained about the department’s refusal to provide neighborhood-by-neighborhood vaccination rate data, saying it is needed in order to target messaging to constituents with widely varying reasons for vaccine hesitancy.

Why, he asked Dzirasa, was the city only providing zip code data to the public and not disclosing the more specific Community Statistical Area (CSA) data? He complained that he was seeking that information but had “been denied at every turn.”

She replied that as the result of Maryland Department of Health policy, that kind of data is only being shared within her department internally.

The questioning came amid the continued resurgence of Covid-19 in Baltimore and nationally, driven by the highly contagious delta variant. As elsewhere, the city’s recent pandemic trends have been alarming.

At a briefing yesterday, Mayor Brandon Scott noted that Baltimore’s new case count over the last four weeks has risen 471%. The city’s 3.1% positivity rate, Scott said, represents a 365% increase over that period of time. 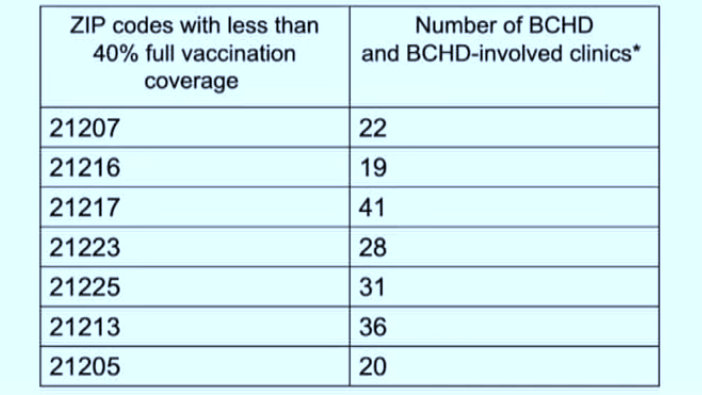 Amid the rising case count and continued disparities, committee members had many questions about the city’s response.

Councilwoman Odette Ramos asked why the city’s Covid dashboard did not include more information on the lagging vaccination rate in the Latino community. Dzirasa agreed that was needed and said it was under discussion.

“The people in many of these communities are not banked and would be receptive to $100 cash payments,” he urged.

Dzirasa said various incentives are under discussion, but that these have so far mostly focused on gift cards, grocery cards or swag.

Schleifer stressed the need for targeted outreach and his concern about misinformation. He said, for instance, he’s encountered women who say they believe the vaccine would prevent them from getting pregnant.

“We need to partner to get more messaging out there,” he said. “To address the concerns of people who want these vaccines, but do have that hesitancy, what can we do?”

In a presentation to the committee Dzirasa reviewed her agency’s efforts (with data as of August 8), including over 700 vaccination clinics held, administering over 50,000 COVID vaccination doses.

Including shots administered by hospitals, pharmacies and others, more than 584,000 doses have been administered.

So far, 408 home-bound people and their partners have received the vaccine. Responding to questions by Schleifer, Dzirasa said about 10 people a day have been receiving these at-home shots. But was unable to say how long the waiting list for them is.

The Health Department is running 20-25 vaccine clinics a week, has expanded hours to include late nights and weekends and is co-locating clinics at established community events.

Dzirasa also noted that the city is providing free transportation to vaccine events, which citizens can request by calling 410-372-3444 or emailing covidtransport@mjminnovations.com.

Among their strategies to get the city fully vaccinated, she said, the Health Department has hired 70 “valued ambassadors” to do community outreach and is in the process of hiring youth ambassadors.

They have also identified “value communities” (see the list above) and worked to provide information to them in barber shops, synagogues, community centers  and other locations and through social media and street canvassing.

Dzirasa says the city’s long-term goal is to have at least 80% of all Baltimore City residents (including children) fully vaccinated by February 2022.