On a sunny day in May, Baltimore city and county officials and Maryland’s two senators, assembling in person to cut the ribbon for the Headworks Project at the Back River Wastewater Treatment Plant, crowed about what the $430 million expenditure would do to curtail sewage overflows.

“Headworks is a game changer for the Baltimore region,” Mayor Brandon Scott declared, as he stood with the other dignitaries at the Dundalk facility.

“It’s all about improving the lives of residents across the Baltimore region while also making our waterways, including the Chesapeake Bay, healthier,” according to the mayor.

“Slashing by 80% the sewer overflows in Baltimore that can deposit a variety of unwanted pollutants into the Chesapeake Bay is a tremendous accomplishment,” added U.S. Senator Ben Cardin.

Less than four months later comes the news that despite this expenditure and others – including roughly $1.6 billion in system upgrades to comply with a federal consent decree – there have been daily illegal discharges of millions of gallons of partially treated human waste for more than a year into tributaries of the Bay. 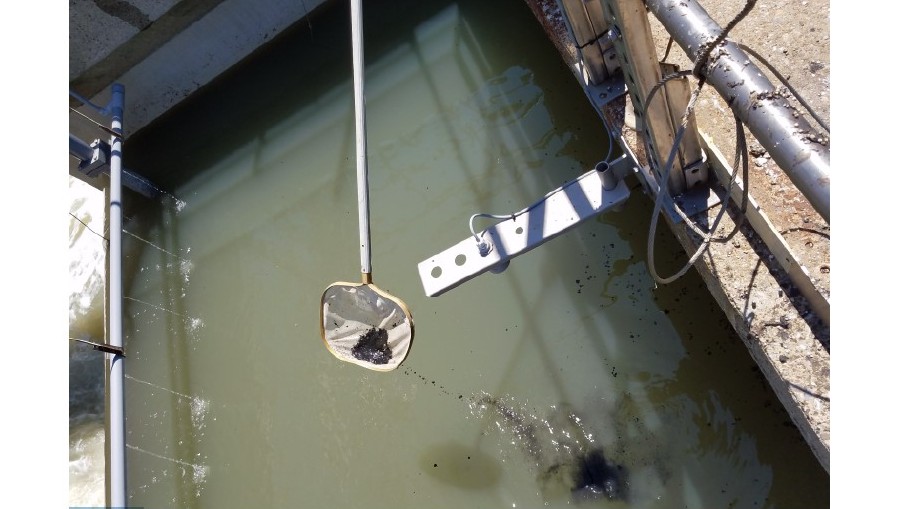 Photo from MDE’s May 6 inspection at the Patapsco facility of an employee manually removing fats, oil and grease because the treatment machinery doesn’t work.

These massive discharges, from the Patapsco Wastewater Treatment Plant as well as the Back River plant, were basically the result of poor management. “Operational and maintenance issues” such as bungled water sampling procedures and failure to maintain equipment or test for toxic chemicals were at fault, state officials said.

All this according to a trove of documents and data released by Blue Water Baltimore, the watchdog group that detected high bacteria levels at the Patapsco Wastewater Treatment Plant’s effluent pipe last May – and alerted the Maryland Department of the Environment (MDE) – leading to inspections and the discovery of multiple violations there and at the Back River plant.

“This is doubly concerning when we just dumped – down a black hole literally – all this money for the [headworks] project. What did we get for it?” Volpitta continued. “We’re spending all this money for engineering, but what’s the point if we can’t operate baseline functions?”

By pointing out this irony, Volpitta added, she was “not intending to disparage the Headworks project in any way.”

“We are excited that this project is finally in the ground and we are looking forward to seeing significant reductions in sewage overflows on account of its construction and operation,” she said. “The Headworks project is an engineering feat, and a worthy expenditure of taxpayer funds.”

“We’re spending all this money for engineering, but what’s the point if we can’t operate baseline functions?”  – Blue Water’s Alice Volpitta.

Also coming in for criticism from Blue Water are MDE and EPA, ostensibly supervising Baltimore’s compliance with a federal consent decree imposed after years of illegal sewage overflows that caused basement backups and nutrient and bacteria pollution to foul local waterways.

Many of the failures and lapses uncovered by the recent inspections date back years.

“This begs the question – where has the oversight been?” Volpitta said.

Asked to respond to this criticism, MDE spokeswoman Maggie Cavey said in an email, “There was a period of time that the city was not reporting in writing certain violations as required which has now been resolved.”

“Our team has developed a strategy to get back into compliance and will be providing a timeline for compliance to MDE next month,” DPW Director Jason. W. Mitchell said in a released statement.

“The root causes for the violations have been identified by DPW and will be addressed systematically to ensure we achieve 100% compliance.” 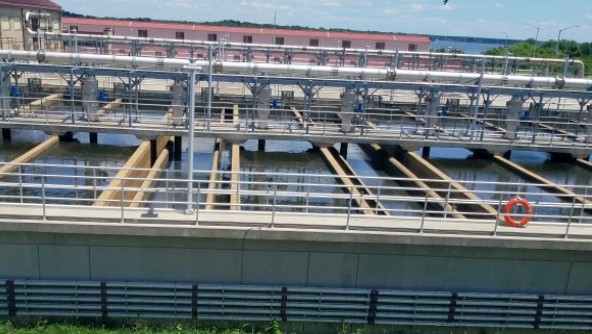 D. Lee Currey, MDE’s director of Water and Science Administration, said in a  letter to Baltimore’s Department of Public Works that the state intends to file a formal enforcement action, which could carry a fine of $10,000 per day per violation.

Asked when a decision will be made about penalties, Cavey said MDE  would be able to say more after a September 3 meeting with DPW.

Currey demanded that “immediate actions and corrective measures” be taken in light of inspectors’ findings, which include unacceptable levels of bacteria, phosphorus and nitrogen released at both treatment plants.

He also noted that the deficiencies uncovered in the city’s sewage treatment capacity threaten Maryland’s participation in the Chesapeake Bay TMDL, the multi-state agreement designed to restore water quality in the Bay.

Back River and Patapsco service approximately 1.6 million people in the metropolitan area, including all of Baltimore City, major portions of Baltimore County, and some parts of Anne Arundel and Howard County.

Volpitta said she recorded the high bacteria levels at the effluent pipe in the Patapsco River just off Wagner’s Point in April and again in May as part of the group’s routine water quality monitoring program.

She said reported her findings on May 5. MDE “came out to inspect the next day,” eventually confirming Blue Water’s estimates that the two plants had been releasing about 130 million gallons of partly treated sewage a day, according to Volpitta.

For comparison, the city’s problematic intentional release of sewage mixed with rainwater from structured outfalls – basically relief valves for the aging system – is about 100 million gallons for the entire year, she said.

The violations occurred between August 2020 and May 2021, MDE said. 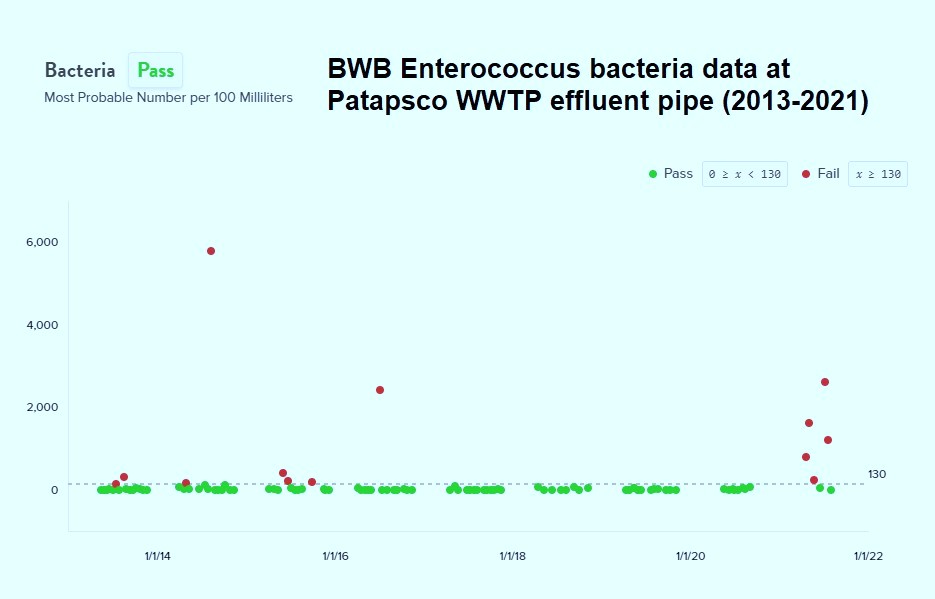 MDE outlined its “serious concerns” about the Patapsco plant in a letter to Josef Kebede, acting head of the DPW’s Bureau of Water and Wastewater.

In addition to illegal effluent releases, violations ranged from failures to self-monitor and report, to bungled operations and lax maintenance.

A major problem uncovered is that DPW has largely ignored a 2017 mitigation plan imposed by a consent decree reached after Blue Water extensively documented FOG (fats, oils and grease) discharges from the plant going back to 2013.

None of the promised upgrade projects – replacing actuators, upgrading “scum troughs,” etc. – was ever initiated, according to MDE’s letter.

The inspectors found that the “primary settling tanks,” a major component of the treatment system, were so caked with FOG that only 5 of 18 tanks are currently functional. Without prompt intervention, MDE said, the remaining five will also fail. 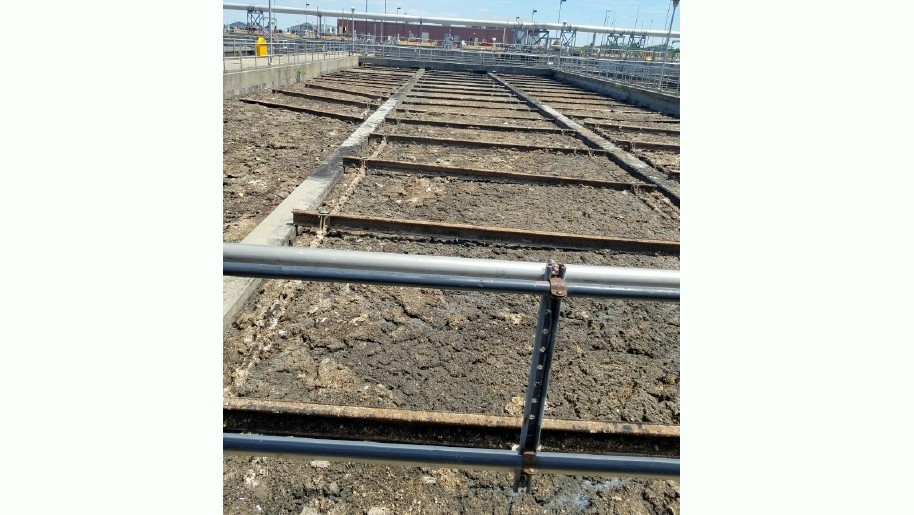 The primary settling tanks at the Patapsco plant are so caked with fats, oils, and grease that only 5 of 18 tanks are functional. (Blue Water Baltimore)

DPW was required under the consent decree to report measures taken to mitigate FOG, but failed to do so in 2018, 2019 and 2020, the letter said.

It also noted that the FOG-related problems at the Patapsco plant require an engineering fix, “which will likely require significant time and resources to implement.”

Another issue cited: Only three of the facility’s eight influent screening units was online at the time of the inspection, while several others were clogged with trash and other debris.

Similar operational deficiencies were detected at the Back River plant. These included issues associated with poor sample collection and monitoring equipment, laboratory analysis and reporting.

“It is the department’s position based on field inspection,” he wrote, “that the effluent violations that have occurred to date are due to significant operational and maintenance issues and as a result, the treatment operations have failed to produce a final effluent that consistently meets the effluent limitations of the permit.”

“The effluent violations that have occurred to date are due to significant operational and maintenance issues”  – D. Lee Currey at MDE.

Another issue was the loss of reliable service of the dewatering system in January as a result of the malfunction of the main centrifuge. As of June 16, the centrifuge was still malfunctioning, Currey reported.

These issues created a backlog of sludge and “higher than normal solids throughout the system,” resulting in excess nitrogen and phosphorous as well as other effluent violations.

MDE also found staffing violations. For example, only two of 76 certified operators at the plant have permanent licenses.

“The department was advised that some of the temporary operators are unable to pass the exam to obtain a permanent license,” Currey pointed out.

• To reach this reporter: fern.shen@baltimorebrew.com