For years as they labored in a dust-choked W.R. Grace Co. vermiculite mine and mill in Libby, Montana, workers were being exposed to deadly asbestos fibers without their knowledge.

But the company and its insurer, the Maryland Casualty Company, were well aware of the dangers posed by the dust – and deliberately concealed them from employees, according to a former mill worker’s lawsuit.

A Montana jury recently agreed, awarding Ralph Hutt, who worked at the mill in the 1960s and now suffers from advanced asbestosis, $36.5 million in a bellwether case that could affect hundreds of additional claims.

The decision affirmed that the insurance carrier was not protected by the W.R. Grace bankruptcy in Libby more than two decades ago.

The case reflects a novel legal approach in which the former worker targeted the company’s insurer, arguing its medical professionals had a duty to protect employees’ health.

Then-Baltimore-based Maryland Casualty, now part of Zurich American Insurance Company, was not only W.R. Grace’s workers’ compensation insurer, but its advisor on safety and medical issues.

Maryland Casualty’s doctors and technicians could see the scarring on the annual X-rays they took of the workers’ lungs, but kept quiet about it, according to evidence presented at trial.

Witnesses said the insurer intentionally kept workers in the dark about their increased risk of asbestosis, lung cancer and mesothelioma until they retired and could no longer make costly workers’ compensation claims.

Maryland Casualty’s doctors could see the scarring on the X-rays they took of workers’ lungs, but kept quiet about it.

Workers were told the “nuisance dust” would not harm them.

“Not only did MCC fail to warn the workers,” he continued, “but it took affirmative actions to conceal this information . . . effectively increasing the risk of additional harm.”

For more than two decades, in multiple lawsuits, asbestos victims and their families pressed for accountability from the owners of an operation that produced so much toxic dust that the entire town of Libby was found to be at risk.

In 2009 the U.S. Environmental Protection Agency placed Libby on its National Priorities List as a Superfund site.

The judge overseeing asbestos litigation in Montana chose Hutt’s case as the first to go forward to help clarify some of the complex legal questions at play.

More than 800 plaintiffs have filed lawsuits against Maryland Casualty.

A prominent Baltimore firm established in 1898, the company grew from occupying two rooms on Redwood Street to building its own skyscraper, the now demolished Tower Building in the 200 block of East Baltimore Street.

The 18-story structure, befitting the headquarters of a major regional provider of fire, property and casualty insurance, was a landmark on the city’s horizon.

In 1921, however, Maryland Casualty moved to West 40th Street in North Baltimore, where its sprawling corporate campus included a separate employees’ auditorium with a stage and pipe organ, tennis courts, ornamental fish ponds and garden walks. Local proms were held on its dance floor.

(The firm’s onetime administration building, with a clock tower that still sounds the hour, still stands as the present-day Rotunda shopping center.)

Swiss insurance giant Zürich International, which acquired Maryland Casualty in 1989, argued in the Hutt case that it should not be held responsible for Grace’s decades-old Libby operations.

Zurich, which moved its Baltimore office to Owings Mills in 2009, declined to comment on the recent Montana decision.

Testimony and evidence presented during the nine-day trial in District Court in Great Falls, Montana, documented an elaborate scheme to hide evidence of health damage at the mine, which operated between 1963 and 1990, extracting the raw material for insulation.

As part of a safety program that Maryland Casualty designed, workers’ health was monitored regularly. Those who showed early signs of lung problems were then moved to other jobs.

Neither Grace nor Maryland Casualty told workers or their doctors the results of the tests nor the dangers that had been extensively documented.

Routine tests by Grace, the state of Montana and Maryland Casualty of the mine’s air revealed that as much as 80% of the dust was asbestos, according to trial testimony.

A 37-page “safety plan,” written by Maryland Casualty after workers and their doctors began reporting lung issues, did not include the word “asbestos,” referring only to the mine’s “dust problem.”

A 1967 memo from a Maryland Casualty lawyer, S. Y. Larrick, urged settling with a worker who had filed a workers’ compensation claim rather than taking the case to a hearing.

“I would very much like to avoid having evidence presented by the opposing party which would reveal the extent and severity of the problem with which we are concerned,” he wrote.

The award in the Hutt case dwarfs those resulting from previous claims against Grace, according to the New York Times.

Litigation seeking compensation on behalf of other former workers stricken with asbestos-related illness is pending elsewhere in the U.S., including in Baltimore.

Zurich has not said whether it will appeal the verdict.

For Hutt, currently tethered to supplemental oxygen, the future is grim. 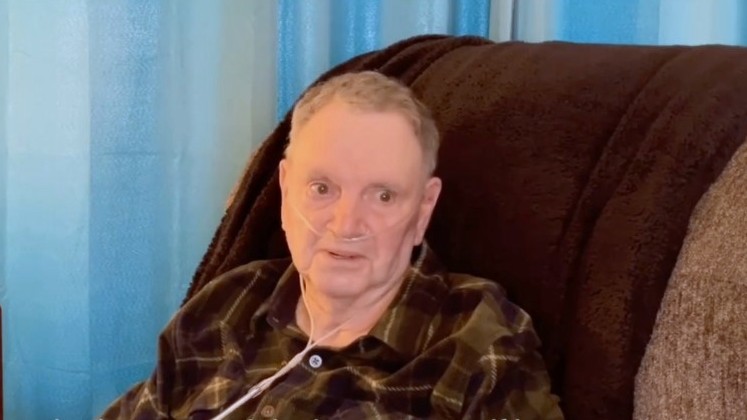 Ralph Hutt, a former employee at W.R. Grace’s Libby, Montana mine and mill, from a video deposition.

In a video deposition from his home in Roseburg, Oregon, Hutt recalled about how his supervisors told him not to worry about the dust, how no one wore masks on the job because they got plugged up too quickly and how his respiratory troubles worsened, leaving him gasping for air after getting up to walk to the bathroom.

Asked if the prospect of “this ever-increasing lack of oxygen” scares him, he said, it does:

He added, “You know it’s coming. You sit there and it’s right – you just can’t breathe. There’s nothing you can do.“