The boxed items given out every week to residents who live near the Liberty Rec & Tech Center were pretty basic, but were highly coveted.

“Inside each box would be four or five potatoes, four or five apples, a bunch of lettuce, maybe a head of cabbage and some radishes or beets,” said Kim Trueheart, who has been running the free federally funded distribution program since the Covid-19 pandemic struck two years ago.

The recipients, in many cases senior citizens with limited access to transportation, made their way to Trueheart’s program off Liberty Heights Avenue in northwest Baltimore.

Or they sent younger family members. Or counted on the boxes being delivered by volunteers.

But that isn’t happening this week.

Along with dozens of other distribution programs across Baltimore funded by the Federal Emergency Management Agency, Trueheart learned from city officials that FEMA has decided to stop providing the funds.

“This is devastating. Many of our neighbors have come to rely on this resource,” said Evan Serpick, who has helped run a similar program out of Beth Am Synagogue at 2501 Eutaw Place.

“Even during the best of times, Reservoir Hill, where Beth Am is located, is a food desert and these boxes were a lifeline,” Serpick said in a Facebook post.

Why hadn’t the city come up with some other funding to keep the $24 million program going in the city?

Trueheart asked that question at Baltimore’s Taxpayers’ Night, decrying a last-minute email from the Department of Planning that she said offered no next step.

“If $24 million goes away, don’t you think somebody’s going to miss it? Don’t you think it needs to be wound down?” she asked Mayor Brandon Scott, Council President Nick Mosby and the other officials seated before her at City Hall for the yearly ritual listening session.

“You don’t just send an email one day and say, ‘It’s ending next week!’” 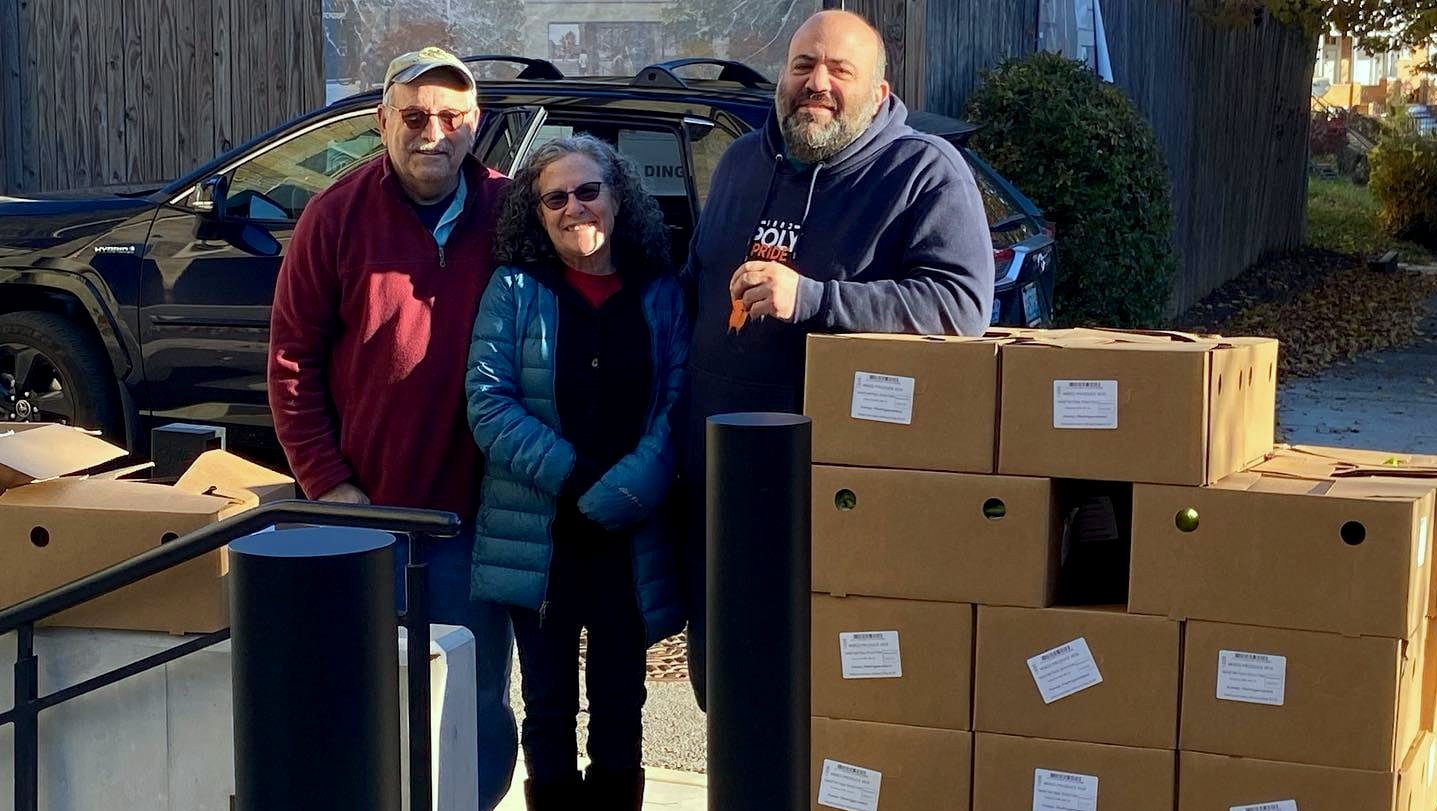 Trueheart said city officials have since told her they are trying to come up with resources to allow food distribution to resume, possibly drawing on the city’s federal ARPA (American Rescue Plan Act) funding.

Serpick said that “there’s been a whirlwind of advocacy” to find funds to extend the program, noting that his group has reached out to U.S. senators Chris Van Hollen and Ben Cardin for assistance.

(Cardin’s office is looking “to learn more details about the emergency funding that has or may be expiring,” a spokesman told The Brew. “COVID-19 may be entering a new phase, but the need for nutritious meals for vulnerable Maryland families has remained high.” Van Hollen’s office said he has asked FEMA to determine whether funding can continue under the Stafford Act, and is looking for other ways “the federal government can support Beth Am’s important work.)

But any produce program the city puts together won’t happen any sooner than a month from now, Trueheart says she was told.

She worries that it will not be funded at the same level, noting that the Liberty Rec & Tech Center, at 3901 Maine Avenue, had been receiving 280 boxes of fresh fruit and vegetables every week.

Boxes were delivered at 8 a.m. and claimed by 8:20 a.m. – Evan Serpick, co-cordinator at Beth Am Synagogue.

The program at Beth Am has been getting a shipment of 100 boxes at 8 a.m. every Friday, Serpick said.

For the last several weeks, the boxes have all been claimed by 8:20 a.m. That’s because a group of more than 100 Afghan refugees have been placed in adjacent building.

“Only recently had they felt safe and confident enough to come out and claim boxes they desperately need,” he said. “This has caused a surge in demand.”

“This is an abrupt halt”

The city Planning Department’s April 26 email to the program coordinators informed them that the FEMA funding was to end, basically, in 10 days.

The letter suggests Baltimore officials had known for some time that the funding was in jeopardy.

“After a waiting period of six weeks, the Food Policy and Planning Division has learned that FEMA will no longer be reimbursing the costs of the Produce Box Distribution Program,” food access planner Yewande Akinkuowo wrote.

Thanking them “for your consistency and commitment,” Akinkuowo noted that since the start of the pandemic, “we have distributed over 171 million servings of fruits and vegetables, in over 1.3 million produce boxes.”

The email went on to remind recipients of other food distribution and nutrition resources, such as food pantries and the Home Delivered Grocery Box program, and provided links on how to sign up for programs like Supplemental Nutrition Assistance Program (SNAP), formerly known as Food Stamps.

“We understand that this is an abrupt halt to a well-loved feeding program that has lasted for over two years,” Akinkuowo wrote. 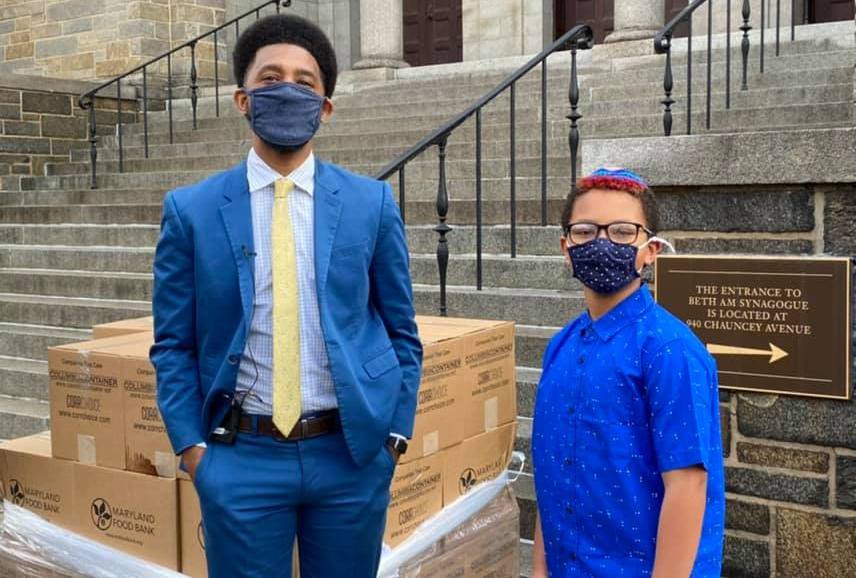 Responding to questions from The Brew, a spokesman for Mayor Scott said that FEMA is responsible for the late notice about the program ending.

Using ARPA funds, the city plans to continue produce box distribution, but at only a fraction of the previous volume.

“We were distributing approximately 17,000 produce boxes per week to approximately 60 sites across the city with FEMA reimbursement,” acting director of communications James E. Bentley II said.

The city’s Food Policy and Planning Division “has been awarded ARPA funds to continue produce box distributions through 2024 at a rate of 2,000 produce boxes per week,” he explained in an email to The Brew.

Bentley said the city is working to get a contract in place “so the distributions can resume this summer,” but he noted that  “we don’t have an exact timeline yet.”

FEMA officials have not yet responded to a request for comment. But in an April 18 email obtained by The Brew, Janice Barlow, a FEMA deputy regional administrator based in Philadelphia, explained the agency’s rationale.

“FEMA initially approved emergency feeding operations for this Applicant beginning on March 16, 2020 and has approved twenty-one subsequent 30-day extensions,” Barlow said in a letter to a state official, who had asked for another extension for Baltimore.

But the city did not demonstrate that the food needs in Baltimore met the program requirements for being Covid-related.

“The current test positivity rate for Baltimore City (3/6/2022) is 0.71%,”  Barlow wrote, pointing out that “grocery stores and restaurants are open, and the mask mandate has been lifted across Baltimore.”

The city did not demonstrate the food needs in Baltimore met requirements for being Covid-related  –  FEMA Deputy Janice Barlow.

“Providing food to the general population based on zip codes, low-risk populations, as an incentive to be vaccinated, or based purely on economic circumstances is not consistent with the eligibility standards established in FEMA policy,” Barlow continued.

Explaining why she was discontinuing the funding as of May 8, Barlow wrote that “it is apparent that the Applicant’s ongoing feeding operations are primarily based on addressing long-term socio-economic challenges that go beyond the immediate threat caused by COVID-19.”

Trueheart said the people who come to Liberty Rec are still very much afraid of Covid-19 at its current level and fear the possibility of a new variant surging.

“I look at people like my mom, who’s 83. She does not want to have to leave the house,” Trueheart said. “She’s concerned about her health to the point where interacting in public is not an option.”

While those with means who have similar concerns can have food delivered to them, lower-income residents cannot turn to that solution.

“It’s scary when you think about people who don’t have things like milk and bread or produce,” she said. “The severity of Covid in Baltimore is still significant.”

Trueheart may dip into other funds she has to try to bring back some produce distribution.

Serpick notes that there are other organizations in the neighborhood doing food distributions, including Corpus Christi Baltimore and St. Francis Neighborhood Center.

“I also know both of these are not able to meet demand, and other neighborhoods do not even have these resources,” he said. “I truly hope we’ll be back in some capacity soon.”