Baltimore Councilwoman Odette Ramos is proposing to greatly reduce the power of elected officials over the city’s Office of the Inspector General amid charges that the current IG Advisory Board has built-in conflicts of interest.

Ramos is seeking to put on the November ballot an amendment to the City Charter that specifically bars elected officials or their designees from sitting on the oversight board. It also bars any state or city employee, lobbyist or anyone doing business with the city from sitting on the board.

She is introducing a resolution at tonight’s City Council meeting that will start the process of getting the initiative on the ballot, which would require Council approval.

“We want to make sure we’re preserving the integrity of the office of the Inspector General,” she told The Brew.

Under its current structure, the seven-member IG Advisory Board is dominated by members who either are – or represent – elected officials that may be subject to investigations.

The panel is chaired by the city solicitor, who is appointed by the mayor.

“It’s been clear for a while that a change definitely is needed,” she said today.

“The public should never wonder if a report is biased or is fully accurate because the subject of an investigation sits on or is influenced by a member of this board,” she said, addressing the advisory board last August.

“No citizen of Baltimore should be concerned whether a future inspector general has the fortitude to stand up to, or investigate, their own board,” she added.

Current members of the Inspector General Advisory Board.

Under the structure Ramos is proposing, five seats on the panel would be people nominated by City Council members, and two seats would be named by the chair of the city Board of Ethics.

Ramos suggests an unusual selection process to come up with the five: each Council member would nominate one person from their district who fits the criteria outlined in the charter amendment, with each  nominee iplaced in one of the following groups:

The ethics board chair would randomly select – “like from a hat,” Ramos says – one nominee from each group.

The remaining two members would be selected – likewise, at random – by the ethics board chair from names submitted by the Baltimore City Bar Association, Association of Fraud Examiners, Association of Certified Public Accountants according to criteria outlined in the charter amendment.

Many major cities and jurisdictions (among them, Philadelphia, Chicago, Miami-Dade County and the state of New York) do not have oversight committees for their inspectors general.

Of the half-dozen that do have such panels, Ramos said, she knew of only two that have elected officials sitting on them – Baltimore and Albuquerque. 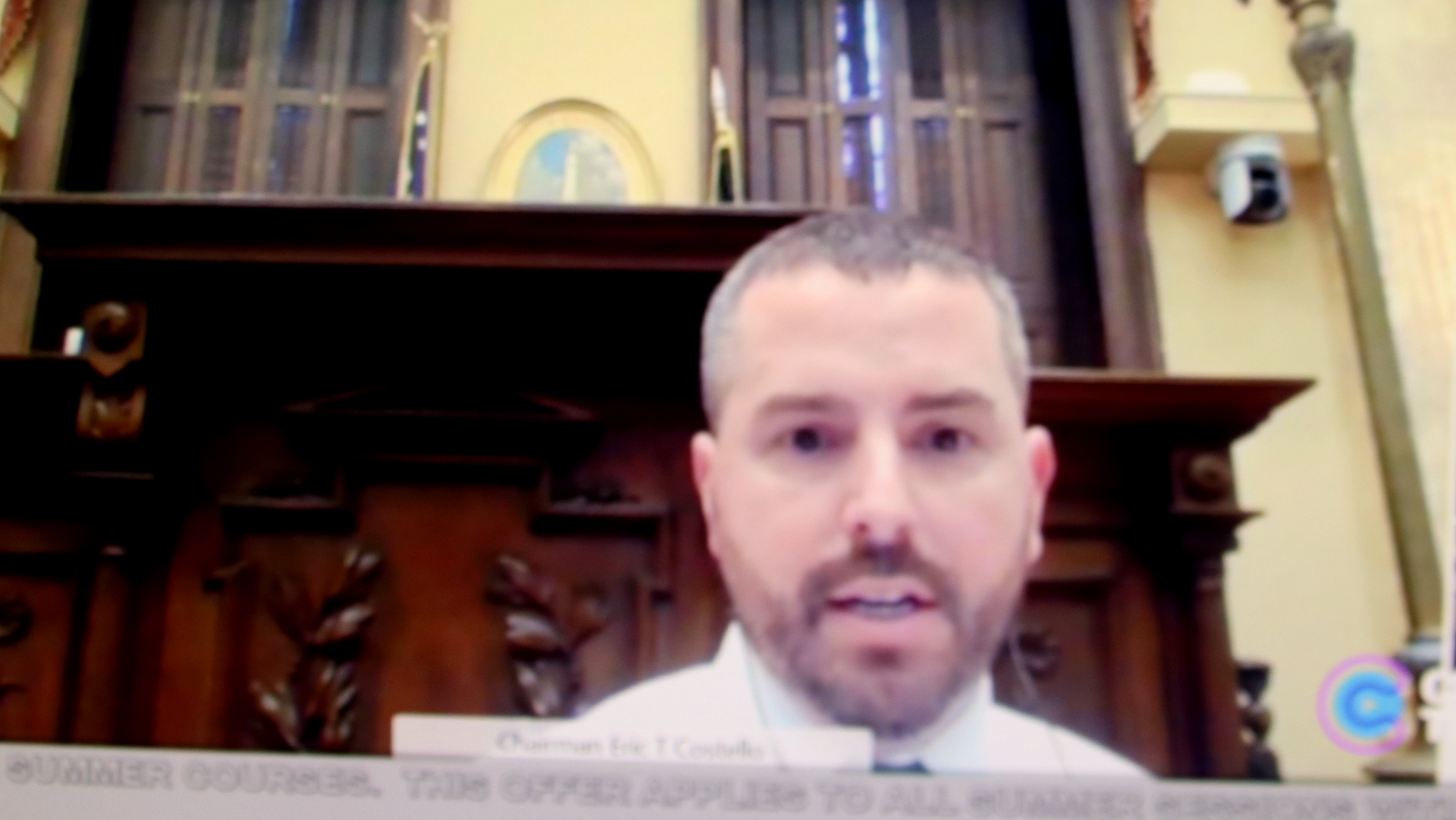 Nick Mosby’s designees on the IG Advisory Board, City Councilman Eric Costello (above) and Council Vice President Sharon Middleton, could not sit on the oversight panel under the proposed charter change. (CharmTV)

While Ramos was circumspect at the noon meeting, stressing that change would eliminate “the appearance” of impropriety, a press release announcing her charter change measure had more of an edge.

“Ramos claps back,” it began.

This was a reference to the April 26 Council meeting in which the CEO of a Boston-based nonprofit flooded the Council chambers with a raucous group of protesters, many from out of the city, and proceeded to insult the integrity of both Ramos and Mayor Brandon Scott.

The leader of the group, an unregistered lobbyist brought in by Council President Mosby to support his stalled Dollar Houses bill, accused Ramos of “doing the bidding for the real estate community.”

Ramos told The Brew she was impelled by “things that happened on April 26th” to consider moving ahead with the charter change proposal, which she had been contemplating for some time.

Upon last Thursday’s release of a report by the ethics board finding that Mosby violated ethics rules on gift solicitations, Ramos said she knew the moment had come.

“Obviously, with what happened last week, this is timely,” she said.

The resolution requires approval by the Council and the signature of the mayor before it can be put before the voters in the November election.

A spokesman for Mayor Brandon Scott, asked to comment on the charter proposal, has not yet replied.

The charter amendment resolution, 22-0238, goes next to the Council’s Rules and Oversight Committee, chaired by Councilman Isaac “Yitzy” Schleifer.

Among those serving on that committee are Councilman Eric Costello and Council Vice President Sharon Green Middleton, Mosby allies who are his designees on the Inspector General Advisory Board.