It’s rare for the Baltimore City Council to vote down a bill to study something, especially when no city agency opposes the study. But it happened today to Councilwoman Odette Ramos’ Council bill 22-0220.

The city-issued bonds, which have largely gone to projects on the city’s waterfront and downtown areas, are a boon to developers, but have long raised questions about whether they steer private money away from poorer Black neighborhoods and fail to benefit citizens generally.

Ramos’ bill called for a study group to report on how well the program is working, whether it could be improved and whether TIFs can be used “for community development and eliminating vacant and abandoned properties.”

When it was voted down 4-3 today by the Ways and Means Committee, Ramos said she was shocked and “really mad.”

“I try not to blindside my colleagues. I didn’t do my due diligence to make calls on it, but that was because it was just a report,” she told The Brew. “I had no indication this was coming.”

Ramos said the main purpose of the study was to see if TIFs could be used “in the community, perhaps to address this $3 billion housing crisis we have.”

“What happened today sends a really bad message to our constituents,” she added.

Voting for the bill were Kristerfer Burnett, Danielle McCray and Ryan Dorsey, who sounded off about the vote afterwards on Twitter. 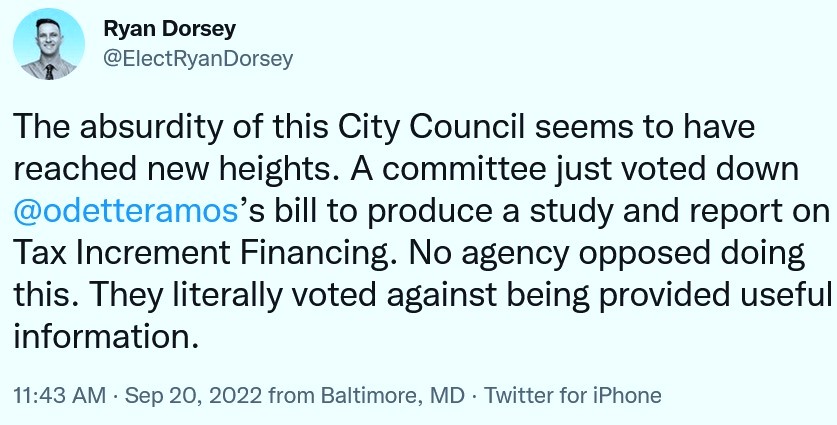 The Brew asked the council members who voted against Ramos’ bill to explain their vote.

“Commissioning a study does not require legislation nor the council’s approval,” said Schleifer, the only one to reply so far.

“The Housing and Finance departments are already reviewing the feasibility of utilizing a TIF for clustered and non contiguous vacant properties,” he said in an email. “I fully support this and any additional studies the administration is willing to fund.”

The bill directed a study to be undertaken by the director of finance, the city administrator, the city solicitor, the housing commissioner and the director of the Office of Equity and Civil Rights in collaboration with advocates, practitioners and residents.

Agency reports on the bill were favorable, with Finance suggesting several amendments, including this one:

“Since the Department of Finance is able to provide the information requested in the legislation based on current reports and those to be completed by financial advisors, Finance proposes amending the legislation to remove the inclusion of advocates, practitioners and residents in the development of the report.”

A report issued in July by the Bureau of the Budget and Management Research (BBMR) recommended that the city should cap and even curtail overly generous tax breaks for developers.

• Mayor and City Council are sweetening developer tax credits that are already out of control, budget office says (8/15/22)

It noted that left unchecked, tax rebates to real estate investors and developers will gobble up 9% of the city’s gross property tax revenues by 2031.

But the report, for reasons never specified, excluded indirect financing mechanisms awarded to developers – notably TIFs and payments in lieu of taxes (PILOTs).

Ramos said she was undeterred by the bill’s defeat in committee today.

“We’ll figure out some other way to get the information,” she told The Brew.