A few days before, a man was shot while attempting to rob someone in their home, then ran away, dripping blood.

Down the street, Crum sees Earl Johnson, the president of the Oliver Community Association, and they talk about the shooting.

Crum, who spent most of his life in Oliver, joined two other challengers a few days later at a candidates’ forum as they offered their take on the needs of the East Baltimore district, which struggles with pockets of extreme poverty, blight and crime.

David J. Heilker and Phillip Westry differed in style and, in some cases, approach from Crum – but they all strongly agreed on one point:

They said the incumbent, who did not attend the event, appears indifferent to the district’s problems.

Westry, a public interest lawyer, was on a roll. Comparing Stokes to Council members who represent other parts of town, he said the 12th “doesn’t have a direction.”

“Robert is a very kind human being,” said Heilker, a graphic designer and neighborhood activist, speaking with The Brew. “But right now it’s like we have one fewer district in the city.” 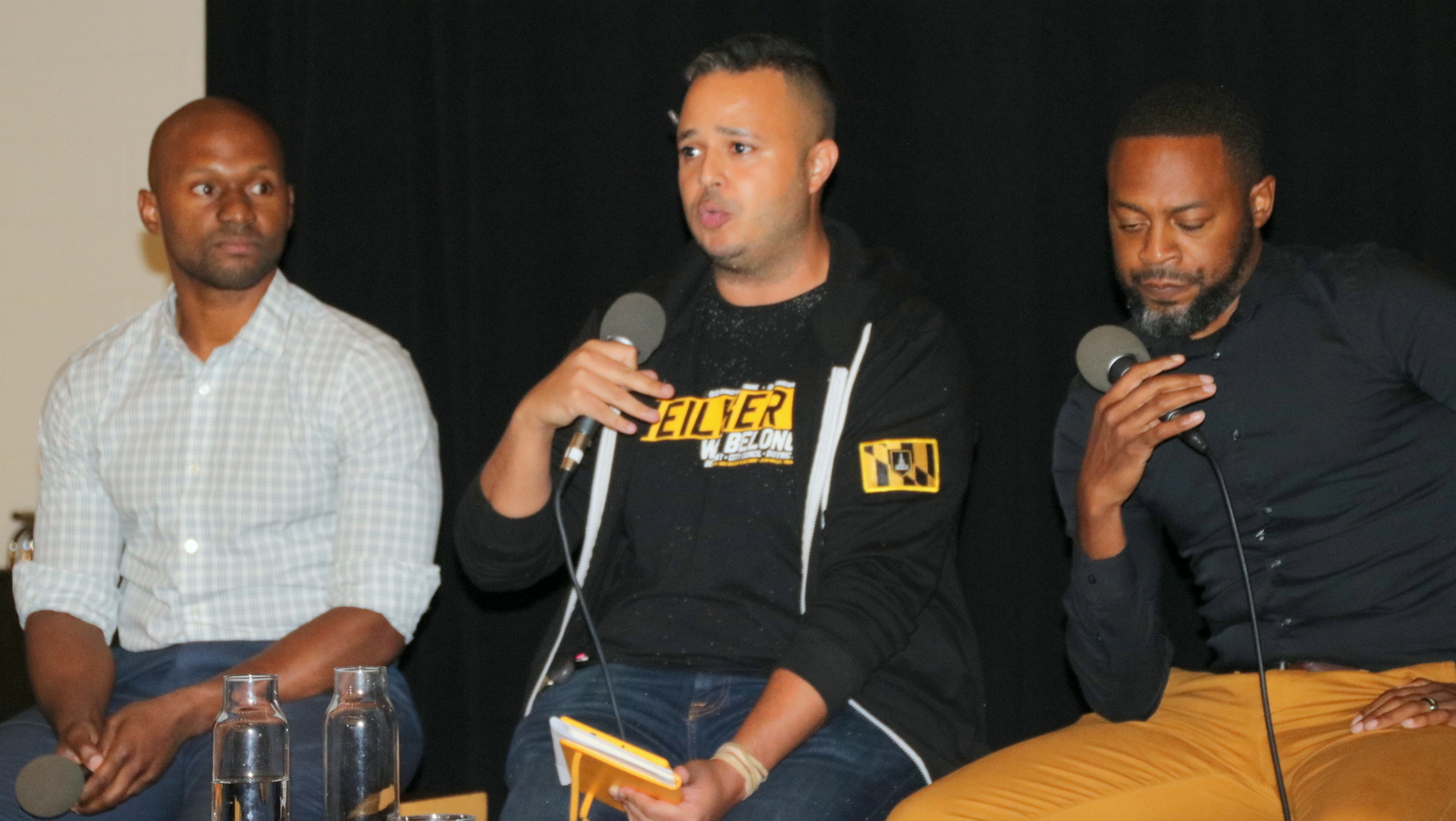 Stokes is in his first term representing the 12th District, which covers much of central and near east Baltimore, including Charles Village, Remington, Broadway East, Mount Vernon, Jonestown, Oliver and Johnston Square.

Demographically diverse, it includes the mid-section of the so-called “White L,” as well as some of the “Black Butterfly’s” eastern wing. 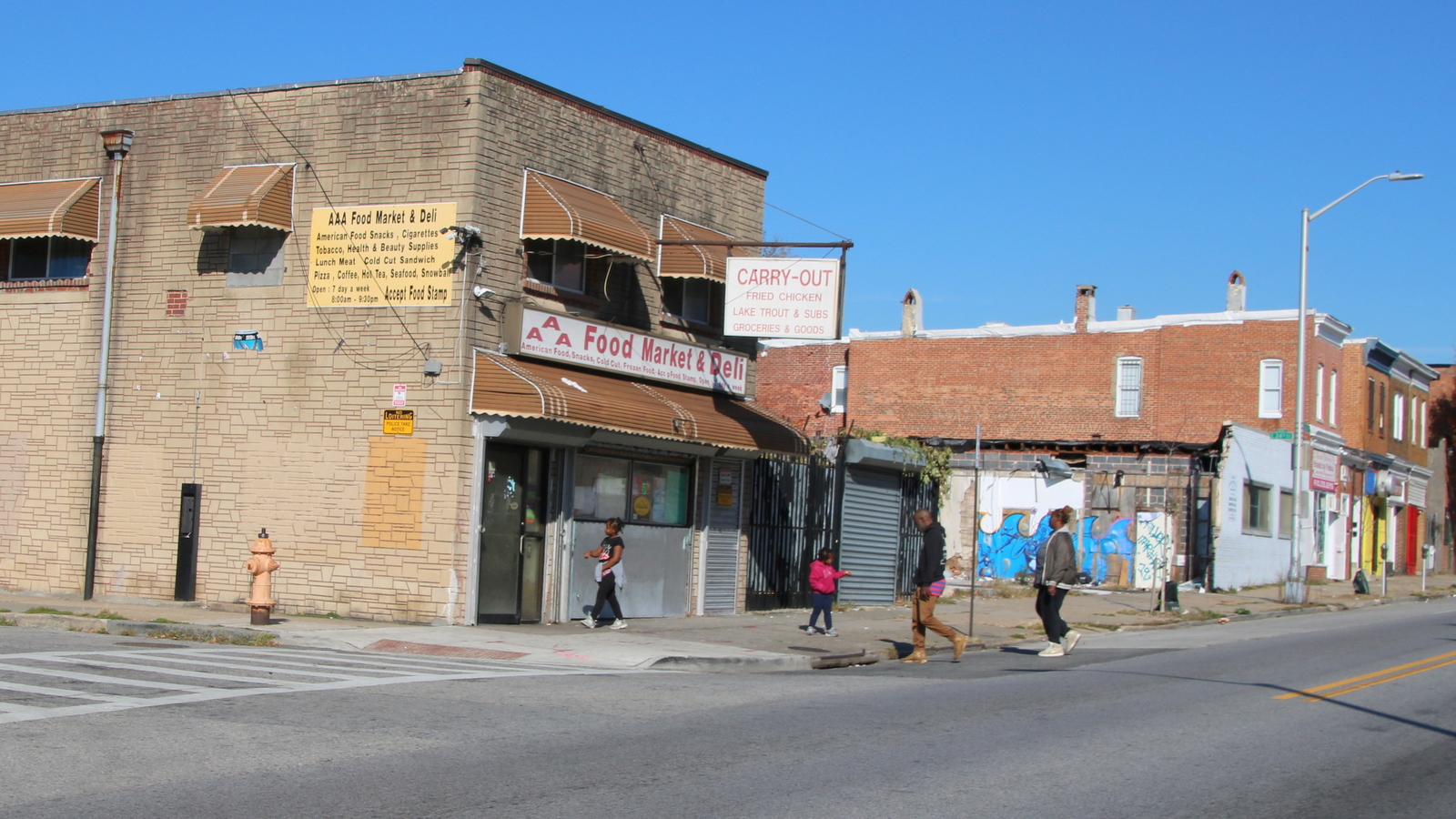 A morning visit to a Greenmount Avenue carryout. (Fern Shen)

“How do you think that pool got opened in Oliver? I opened it!” he said, speaking briefly with The Brew after last week’s City Council meeting.

“If you look at my track record, I’ve done a lot in the past three years.”

With three challengers already in the mix and a fourth, Kelly Cross, “considering” a run, Stokes is coasting through the early primary season, well aware that a splintered vote means he needs comparatively few votes to win.

Why did he skip the forum sponsored by activists Kyle Fritz and Dan Sparaco of bmorenow.org and the Greater Remington Improvement Association? He instead attended two other community meetings that night, he told The Brew. 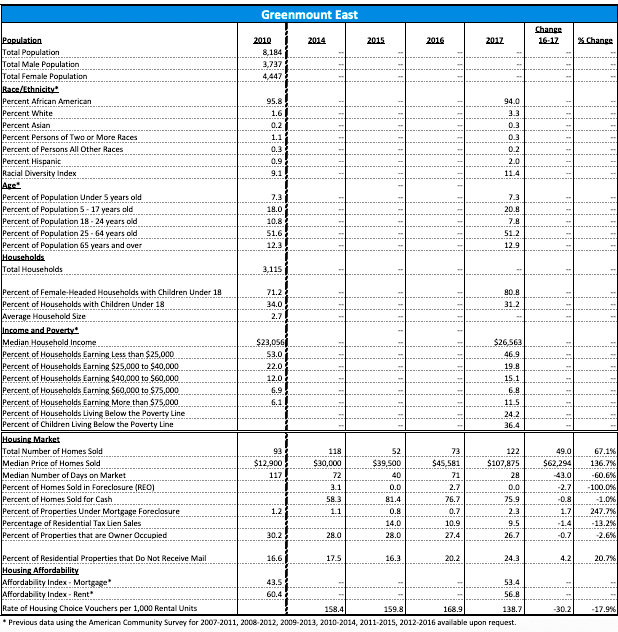 Demographic information for some of the neighborhoods comprising the 12th District, including Oliver and parts of Johnston Square and Broadway East. (bniajfi.org)

Residents say the district’s biggest issues are those that challenge large parts of the city – crime, inadequate transportation, disinvestment, poverty and lack of affordable housing.

In a historically redlined city, the 12th’s north-south spine along Greenmount Avenue/York Road has been one of Baltimore’s starkest dividing lines.

Bus transportation is available along main corridors like Charles and St. Paul streets as well as Greenmount and North avenues, but is absent in many parts of the district.

Redevelopment has pushed some residents out, while others live in hollowed-out neighborhoods with high rates of vacant houses and few services or amenities.

There are also disappointments.

One has been the halting development of the Station North Arts & Entertainment District, despite years of top-down investment by the Maryland Institute College of Art, Johns Hopkins University, non-profit organizations and city taxpayers. 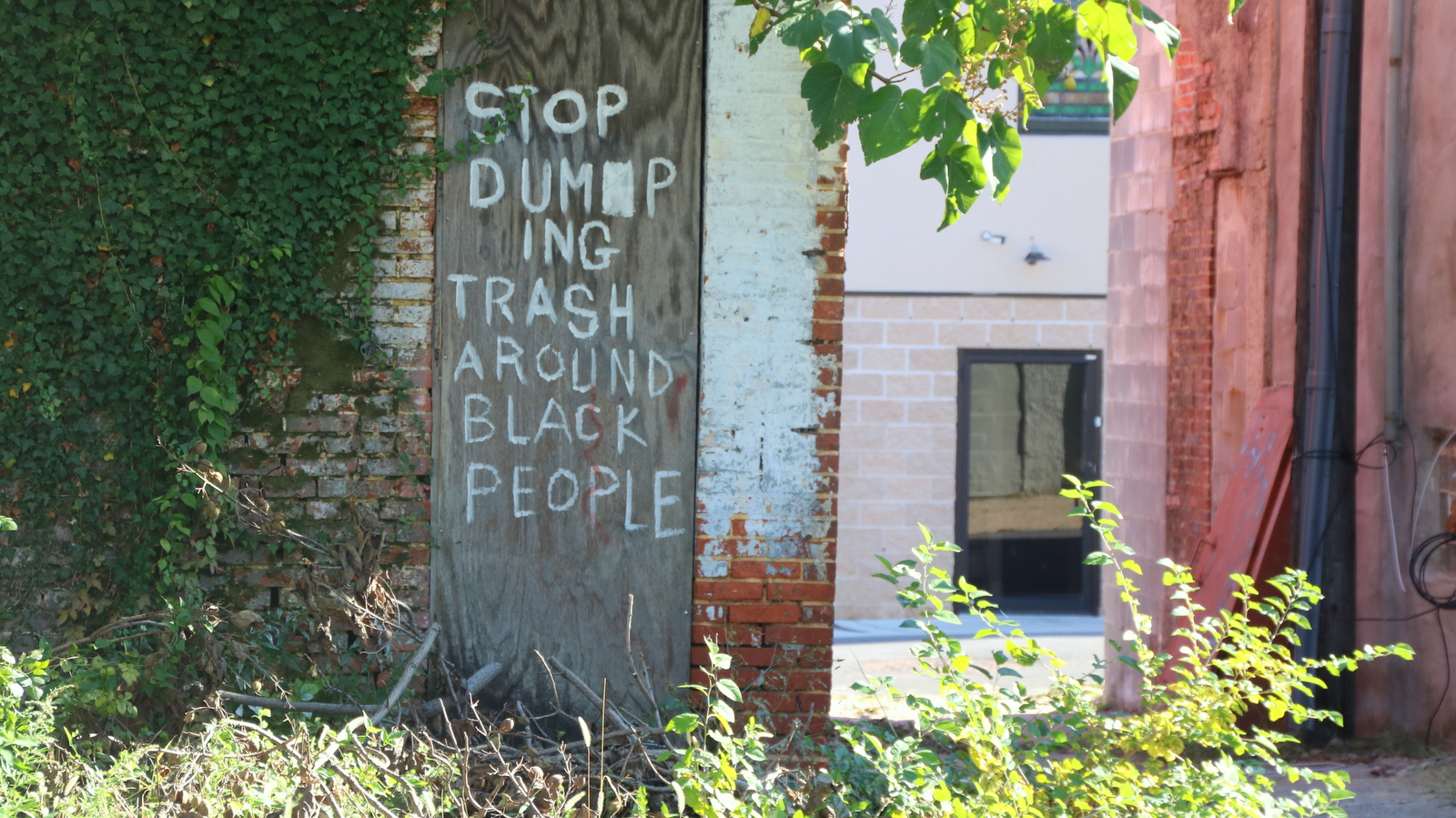 Painted on the back of a vacant house near Greenmount Cemetery. (Fern Shen)

Stokes may be a first termer on the Council, but he’s certainly not new to politics. He’s been a stalwart of the Eastside Democratic Club for decades, starting out in 1984 as a campaign coordinator for former Councilman Edwin Johnson.

After serving in low-level positions in the Kurt Schmoke administration and being elected to the Maryland Democratic State Central Committee for multiple terms, Stokes was hired in March 2010 on the staff of former 2nd District Councilman Carl Stokes. (The two men are not related). 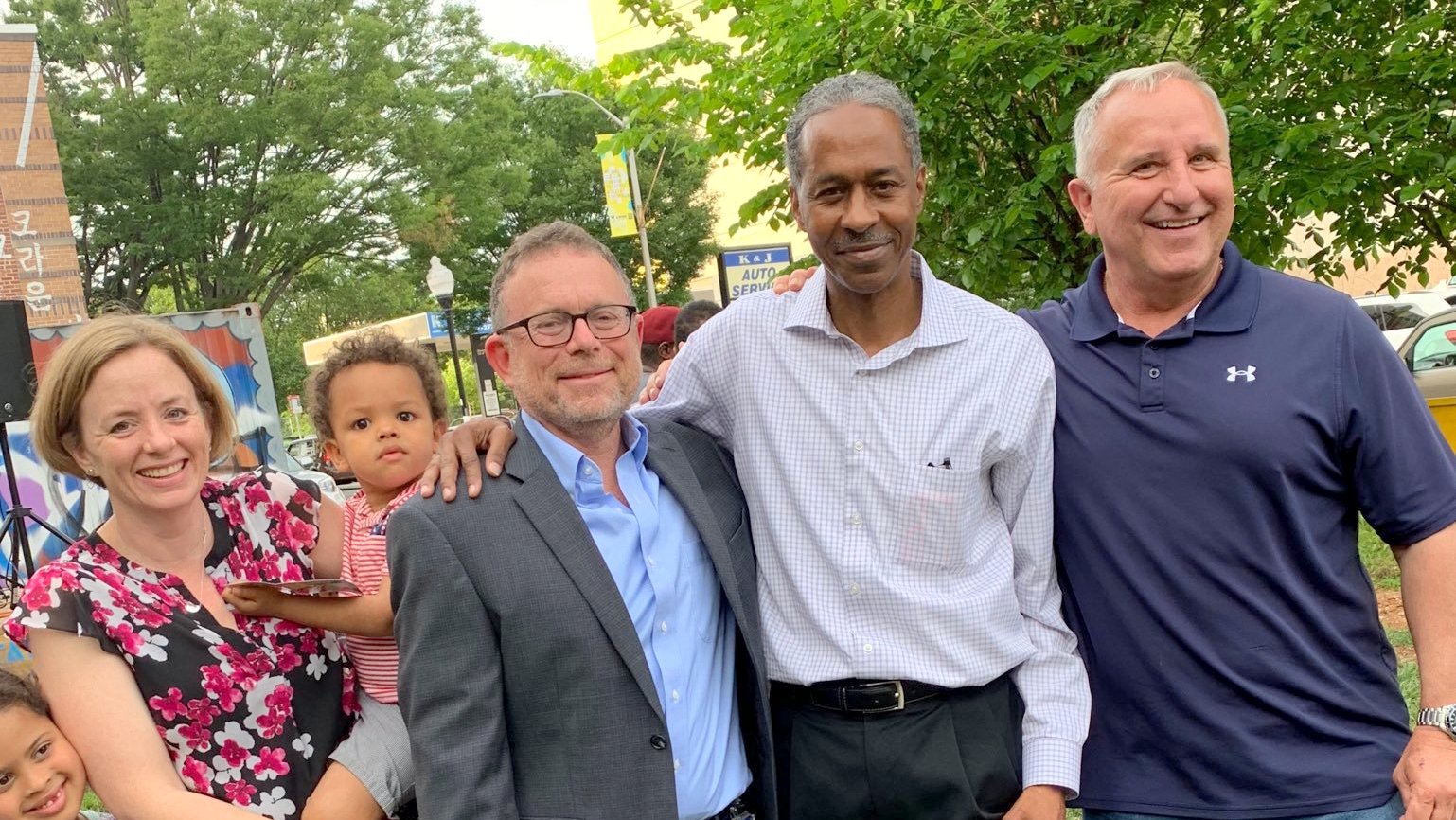 Stokes is viewed by many as a one of the least independent members of the Council. In his position as chair of the Executive Appointments Committee, they say, he’s a proxy vote for the mayor, rubber-stamping his nominees.

“He can’t raise his hand without the mayor saying ‘raise your hand,’” Crum quipped.

In Crum’s view, Stokes tends to “put out fires” rather than work proactively. When he wants to get neighborhood projects done, he said he emails Young and copies Stokes.

Asked about Stokes, Oliver Community Association President Johnson looked down and shook his head. He said the association hadn’t worked with the councilman.

Melissa Schober, a public schools advocate who lives in the district, echoed Westry’s view that Stokes seems to have no zeal for the issues.

“I really could not tell you what he does with his time,” Schober said.

The page has some comments, though most are digs about Stokes’ July appearance on Fox host Tucker Carlson’s show and mocking references to his 2017 traffic-stop encounter with Baltimore police.

As an attorney with the Maryland Center for Legal Assistance, Westry helps clients with landlord/tenant issues and criminal expungement.

He said he sees many of the city’s problems firsthand through his work, and underlined that point when the talk at the candidates’ forum seemed to him to be too glib and theoretical.

Realizing he could do more than serve individual clients, he decided to seek office to make change “on a systemic level,” he said, ticking off his ideas in a conversation with The Brew. 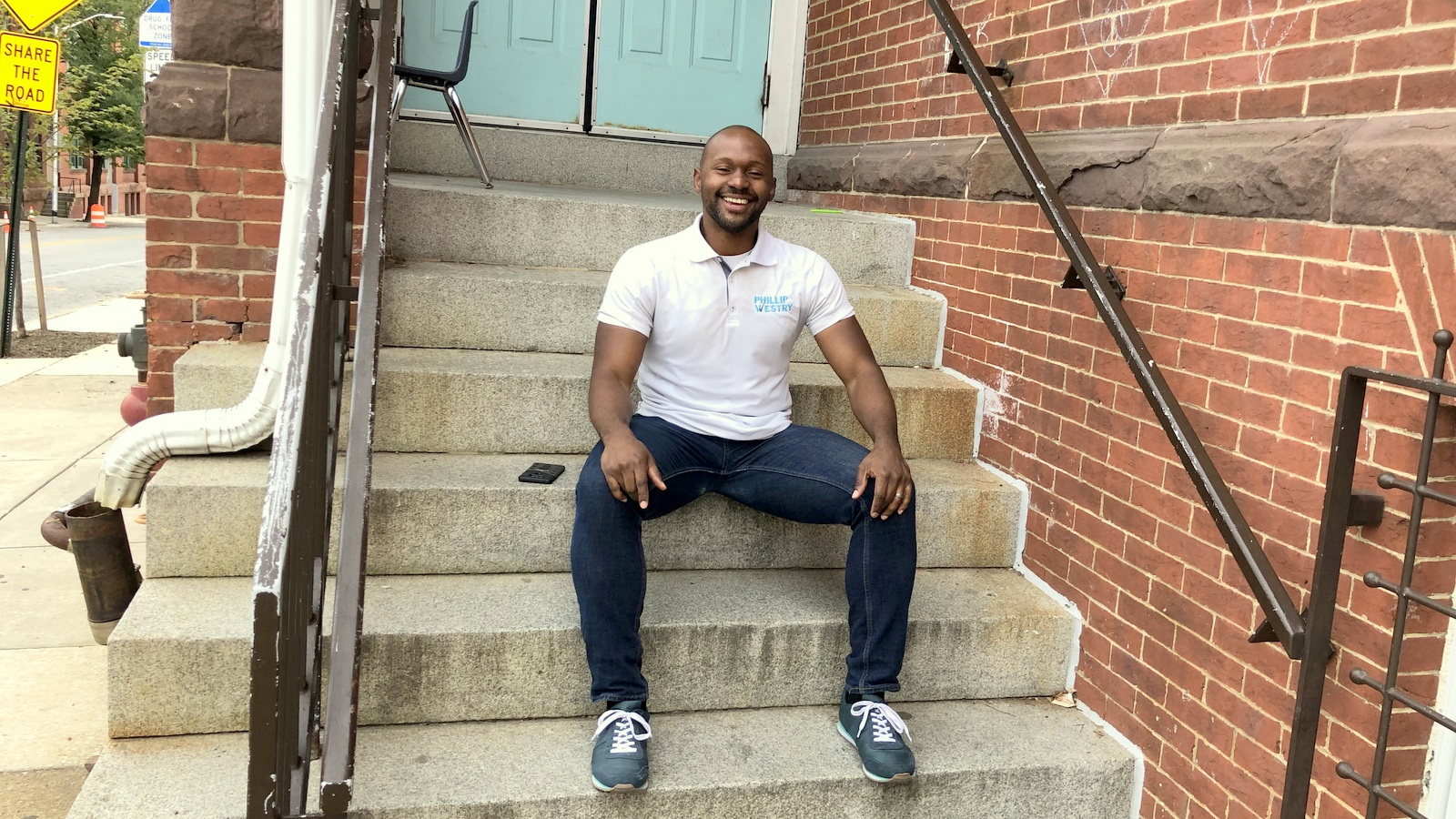 Phillip Westry is an attorney at the Maryland Center for Legal Assistance. (Ian Round)

To address the district’s lack of affordable housing, he wants to cap year-to-year rent increases and increase multi-family zoning. He said he wants to give community associations the right of first refusal in acquiring vacant homes and also wants to create more incentives for new homebuyers.

“I’m really about the creation of wealth in poor neighborhoods,” he said, near his home in Greenmount West. “This neighborhood is better when there are more people walking around.”

Westry grew up in Glen Burnie and has lived in the district since 2008, when he moved to Baltimore to attend law school.

He said people often think he comes from money, but he said his childhood was not as privileged as it may seem. He said his father was kicked out of the military because of drug use and continues to struggle with substance use disorder.

“We’re dealing with a community, they don’t own their own homes, a lot of folks don’t own their own furniture,” he told the R. House crowd, speaking about the poorer parts of the 12th. “I’m in a space like this, and the conversation really needs to be about equity.”

As a native son who turned his life around after rough beginnings, Crum considers himself the most authentic candidate, with the best shot at making meaningful change.

“I’m closer to a lot of the problems that’s going on,” he said.

Since then, he’s been active with Baltimoreans United in Leadership Development (BUILD). He recently left a job in property management for a position in conflict mediation at a local high school.

He says the city has been ineffective at fighting crime. (Like Westry and Heilker, he calls for reduced spending on police and police overtime, and giving the Council more control over the budget.)

Crum wants to fund programs such as Safe Streets and Baltimore Ceasefire, which promote mediation and employ people who need work.

“I know a hundred guys right now that want to get off the streets,” he said. “It’s no results happening, so let’s try it different one time.” 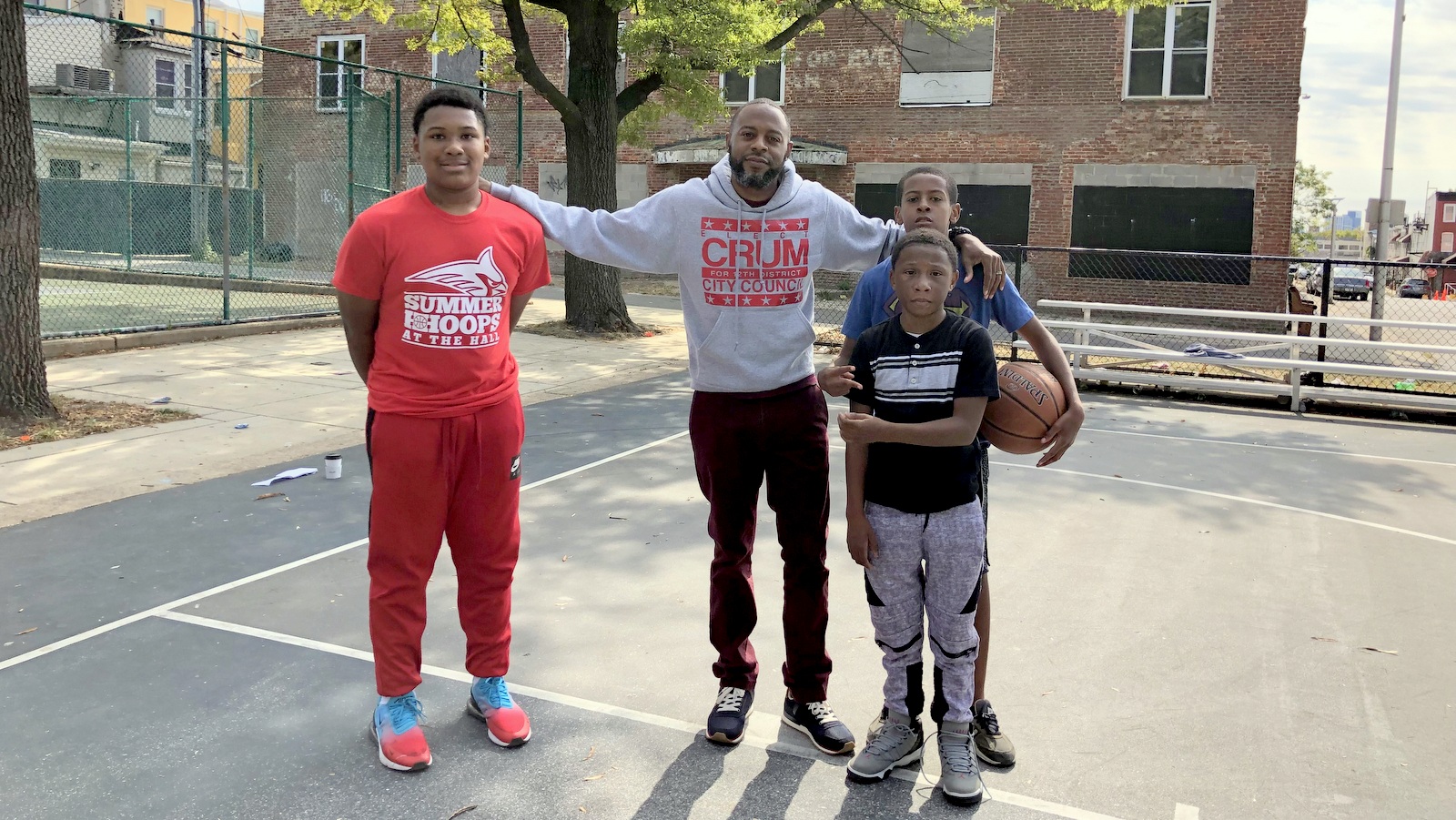 Gary Crum says his tough beginnings and turnaround story give him insights into the district’s problems. (Ian Round)

The 38-year-old wants to change the way water consumption is charged, so that people with incomes near the federal poverty line would pay nothing or significantly less, while larger institutions, such as universities and hospitals, would pay more.

“Water is not the type of resource where you should get a discount for buying in bulk,” he said. The system would also be a “sideways tax on JHU.”

Heilker was an outspoken opponent of Johns Hopkins’ successful plan to get a private police force for its East Baltimore and Homewood campuses. (At the forum, he referred to the Baltimore Police Department as “a gang that is extorting us,” and remarked that he is “probably the only person who has suggested de-funding the police entirely.”)

He wants to change the way real estate is taxed in order to force owners of abandoned homes to pay more. He has detailed plans for transportation, the environment and racial equity.

Dave Heilker has worked for elected officials; now he wants to become one. (Ian Round)

Heilker positions himself as the candidate farthest to the left. But despite that, the 38-year-old has connections to the political establishment, having done digital marketing work for many local Democrats, including Councilman Zeke Cohen, Delegate Brooke Lierman and Senator Bill Ferguson.

As outspoken about design as he is about politics (“Most political logos really suck!”), Heilker crafted his own logo and website inspired by the Latin American propaganda aesthetic.

Heilker has lived in the district, in Remington, for less than two years. He spent his early childhood in northeast Baltimore before his family moved to Baltimore County. In addition to organizing against the Hopkins police force, he’s been involved in Baltimoreans for Educational Equity and other causes.

“I’m a person who likes to challenge authority,” he said. “I just have a lot of desire to see the city do well.”

Kelly Cross, who came very close to denying Stokes his Council seat in 2016, says he is still mulling over entering the primary race.

The president of the Old Goucher Community Association informally announced his candidacy in June, but his campaign has lain dormant since.

“Right now, I am officially considering, but I’m 95% certain I’m not going to be running,” Cross told The Brew yesterday.

Candidates have until January 24, 2020 to declare.

At the forum, one area that generated spirited back-and-forth was the question of how to revitalize the district.

Westry spoke of the need for affordable housing “in our hardest-hit neighborhoods.” He said city government needs to consider building smaller, less expensive houses and soliciting input from “creative” developers who “aren’t able to write the big [campaign] checks.”

Abandoned rowhouses – here on the 500 block of East 22nd Street – have plagued the district for decades. (Fern Shen)

Heilker said he would take a different approach: “I don’t think we should be so developer-forward on this sort of thing.”

“Somebody’s got to build it,” Westry interjected.

Heilker said he favors a community land trust model to support peoples’ ability to invest in their own communities.

“It’s important to recognize that our salvation does not lie in the hands of developers and that if we keep doing this top-down nonsense, we’re going to get more of the same,” he said.

Westry challenged him, raising the example of the St. Ambrose Housing Aid Center, a non-profit developer where he previously worked.

“We developed 50 houses a year,” he said. “There’s nothing wrong with that model.” 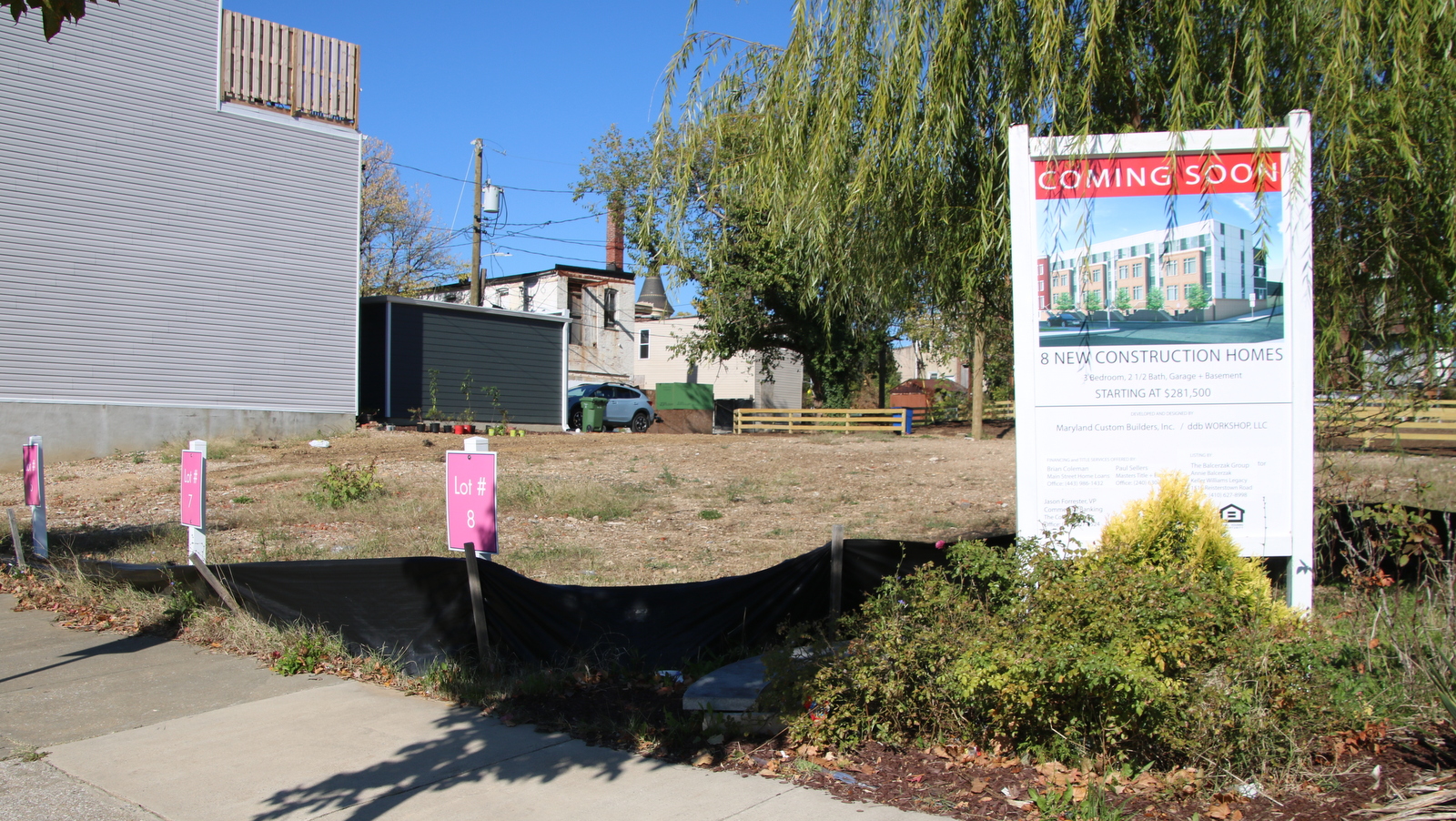 Crum, meanwhile, criticized the redevelopment that is already taking place, noting that public housing residents at East Baltimore’s Perkins Homes were given vouchers to leave and that only 12% of the redevelopment planned there will be affordable housing.

“Let everybody come back in,” Crum declared. “We’ve got to stop knocking down houses and rebuilding them and then charging two times what they were before.”