Michael T. Moore, the man who punched and shoved City Council President Brandon M. Scott outside a political event on Wednesday, has received a summons to appear at the courthouse on Monday.

But after viewing a newly-released video of the encounter today, Moore said he doesn’t plan to comply with the summons because he believes the video shows Scott started it.

“I won’t even show,” Moore told The Brew. “It shows him shoving me out [of] my place and me standing my ground.”

But as Scott’s communication director sees it, the short video obtained by the Baltimore Sun shows just the opposite.

“I think it shows exactly what the Council President and witnesses say happened,” Stefanie Mavronis, the aide, said. “That this was an unprovoked attack on Baltimore’s City Council President.”

The men’s initial interaction is somewhat obscured on the brief video because Moore’s back is to the camera.

The summons is for Moore, of Perry Hall, to appear at the sheriff’s office at Court House East during business hours on Monday to be served with “civil documents.”

Scott said in a statement released Saturday that he has sought a temporary restraining order against Moore. 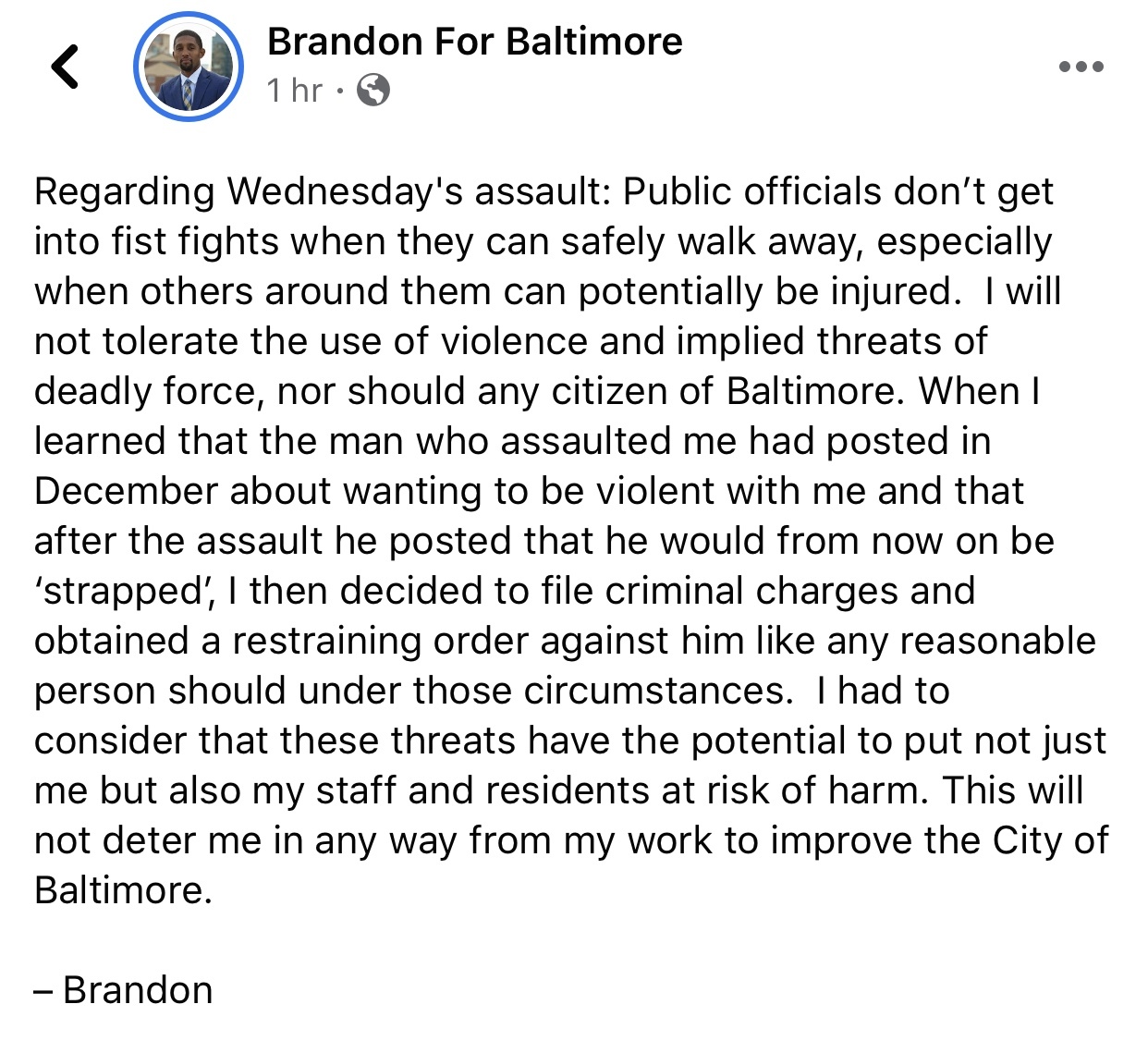 Moore, a volunteer for former Mayor Sheila Dixon’s campaign, was distributing campaign literature outside the Reginald F. Lewis Museum ahead of a forum featuring Dixon, Scott and other candidates when the incident took place.

Dixon said yesterday that Moore, who worked for her 2016 mayoral campaign as well as the current one, has been dismissed.

She said she knew nothing about what took place until afterwards and called Moore’s actions “completely unacceptable.”

A police report on the incident, released last night, provides the following description of the encounter involving Moore, which reflects Scott’s account of it:

Scott (whose name is redacted) “was walking into the Reginald F. Lewis Museum on 5 February, 2020 at 1854 hours for a mayoral campaign debate. While walking into the main entrance, a male stepped into his path and bumped into him. At first [Scott] thought it was unintentional, then the male bumped into him again, and swung a closed fist at his face but did not make contact. The two were separated by their associates and [Scott] continued into the museum.”

Calling the crime “common assault,” the report also notes that Scott said he did not receive any injuries and did not require medical attention.