With George Floyd’s last moments under the knee of a Minneapolis policeman seared into our collective consciousness, Americans are raising long overdue questions about the pervasiveness of racial hatred in our white-dominated culture, especially in police departments.

Some are demanding that police departments be “defunded” or “disbanded” and rebuilt from scratch.

As we grapple with those big issues, consider this major driver of abhorrent police behavior – one that could be stamped out now with sufficient political will and changes made in the law:

Many police departments are in the thrall of powerful police unions that promote an “us versus them” culture that dehumanizes citizens and covers up officer misconduct, whether that misconduct is based on racism or on something else.

We saw that culture on display last week in Buffalo, where a viral video showed officers shoving a 75-year-old white protester to the ground and leaving him there, bleeding from the head.

Just as appalling was the subsequent footage showing what happened after two officers were charged in that case – as they emerged from the courthouse, fellow cops clapped and cheered.

The head of Buffalo’s police union described the officers as “simply following orders to clear the square” and suggested the man just slipped and fell.

The public credibility of this statement did not matter to the union chief – the public was not his audience. He was reinforcing a message consistently given to members of the Fraternal Order of Police, the largest law enforcement union in the country:

Stick together, accept no responsibility, and cast blame on others. 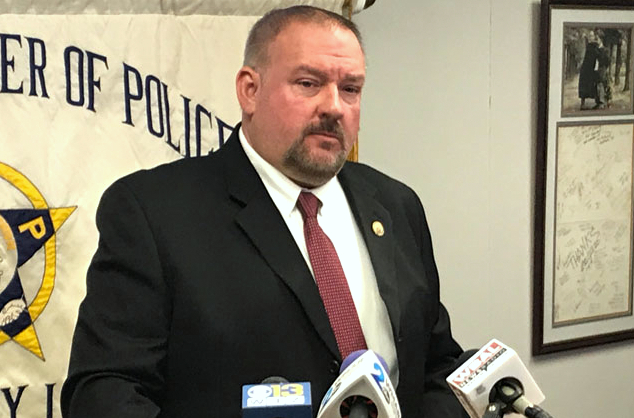 That messaging reflects the brainwashing that goes on within FOP lodges across the country, including here.

Established in 1966, Lodge #3 in Baltimore has been the sole bargaining agent for rank-and-file police officers, sergeants and lieutenants.

Through lobbying, campaign contributions and other alliances with local elected officials, Lodge #3 has expanded its reach from meat-and-potato issues of salaries and contracts into a political force declaiming on public safety and protecting its ranks from public accountability.

Here is some of what Mike Mancuso, its president, told members last week as Baltimore citizens were marching peacefully in the streets against racial injustice and police brutality:

“Even when it appears that many are against us, you continue to put your lives on the line for the citizens of Baltimore in the face of great danger. . .

“Continue to protect and defend one another, even when the sheepish leaders that surround us ‘Monday morning quarterback’ our decisions to forcibly stop assaults on us.” 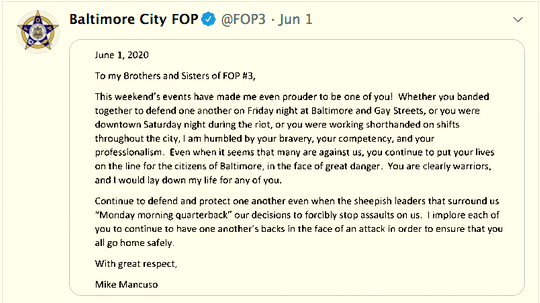 His theme that police belong to a separate warrior class locked in deadly conflict, unappreciated by citizens and abandoned by “sheepish leaders,” and whose safety depends on their unflinching loyalty to one another, is key to understanding why the gulf between police and citizens has widened into a deep, distrustful ocean.

A culture in which police see themselves as an institution apart from, and often at odds with, the communities they serve did not evolve in a vacuum.

Officers perceive themselves as bound by a different set of rules because, in important respects, they are.

If I were designing an environment in which a culture of brutality and other abuse could flourish, I would start by weakening the disciplinary process and make it move as slowly as possible.

Officers perceive themselves as bound by a different set of rules because, in important respects, they are.

I would take decisions on whether officers deserved discipline for incidents away from police chiefs (who can be held accountable for their decisions) and give it to random panels of fellow officers (who cannot).

I would then shroud the process in secrecy to hide its inadequacy from the public.

And I would give police unions the legal authority to set themselves up as separate power centers competing with police chiefs for control of police departments, thereby encouraging the unions to alienate themselves from both police and civilian leadership and from the citizens they are supposed to protect and serve.

I understand what makes people question the whole concept of police departments. But, right now, they’re what we have.

I have just described the situation under Maryland law. Add to the mix the informal blue code of silence among officers, and a culture that condones misconduct and fosters illegality is a foregone conclusion.

Nothing will change until that culture is changed.

What Needs to be Done

Tearing down the legal walls that police officers and their unions have erected between themselves and the “civilian” world in Maryland will require legislative action in Annapolis to change the foundation on which those walls were built.

Return control, and therefore the power to shape the culture, of police departments to police chiefs who share the values of the elected officials who appoint them.

Here are a few important steps:

• AMEND THE LAW ENFORCEMENT OFFICERS’ BILL OF RIGHTS (LEOBR) to empower police chiefs to decide whether the actions of officers deserve discipline. If civilian review boards are used in a jurisdiction, make their roles advisory but give them independence, resources and full access to investigatory and personnel records. At the end of the process, however, police chiefs must have full authority to decide on discipline so that they can be held fully accountable for the conduct of their officers.

• AMEND MARYLAND’S PUBLIC INFORMATION ACT TO MAKE COMPLETELY TRANSPARENT any disciplinary action against officers for dishonesty or untruthfulness in their duties and for the verbal or physical abuse of citizens, including brutality or excessive force.

• EXPAND THE LEGAL RESPONSIBILITIES OF POLICE OFFICERS to explicitly include the duty to intervene to protect a citizen from brutality by other officers and to report misconduct by other officers that threatens the well-being of citizens. That is the only way that the organizational culture can be altered to promote not only unity and teamwork, but also accountability and integrity.

I am certainly not the first person to call for the FOP to be reined in. Many citizens in African-American communities have been pointing the finger at the union’s combative influence for years.

These citizens should be the ones driving the conversation. All I can offer is, based on my experience, my thoughts as to where the problems lie.

I understand what makes people question the whole concept of police departments. But, right now, they’re what we have. And I know Baltimore will not be able to pull itself out of a debilitating cycle of violence without an effective BPD.