When I ran for Baltimore City Circuit Court Judge in 2016, it struck me as particularly appalling that voters who belonged to the Green Party or any “third” or “non-principal” party, along with independents, had virtually no say in the election.

That’s right. The unspoken reality is that in our one-horse town Democrats control politics at every level. This Democratic dominance is downright undemocratic.

As of 2018, city Democrats outnumbered Republicans by nearly 10-1. In this year’s general election, more than 87% of the electorate cast a “blue” vote.

Because such a lopsided number of our citizens are Democrats, all that candidates for public office have to do is win the Democratic primary. Just cater to your own.

They have been doing this for the last 100 years. And we haven’t yet considered expanding our outlook beyond Democrats despite endless examples of police department corruption and City Hall scandals?

One of the tragedies of Maryland primaries, especially in one-party towns, is that third parties, like the robust Green Party, and independents don’t really get to participate.

Election laws are a funny thing – set up by lawmakers in office belonging to the principal parties and designed to keep the two-party system in place. We don’t have open primaries in Maryland, so voters are restricted to selecting within their party.

In other words, Republicans can’t cross over and vote for a Democrat and vice versa until the general election. And non-principals and independents can’t participate in the Democratic primary to have some impact on the outcome.

However, for ostensibly non-political offices like judge or school board, non-principal party members can seek primary ballots to cast votes for those positions. But this information is, as far as I can tell, nowhere to be found on the city’s Board of Elections website.

Most non-principal party folks have never even been informed about their primary election rights. Local elections boards are given considerable leeway to tailor their rules and websites as they wish, another example of those in power setting the rules.

I saw this firsthand as a candidate for judge. Greens and other non-principals were particularly receptive to my outsider bid to challenge the slate of sitting judges.

But I found that most independents and third-party voters did not pursue voting in the primary, nor was information from the BOE easy to come by. And my shoestring campaign didn’t have the capacity to educate them.

It was a formidable enough task to try to advance to the general election by convincing Republicans, no less Democrats, to make me a top choice (the top six from either party advanced).

Non-principal party voters are simply written off in primaries because the controlling political machine allows and encourages it. 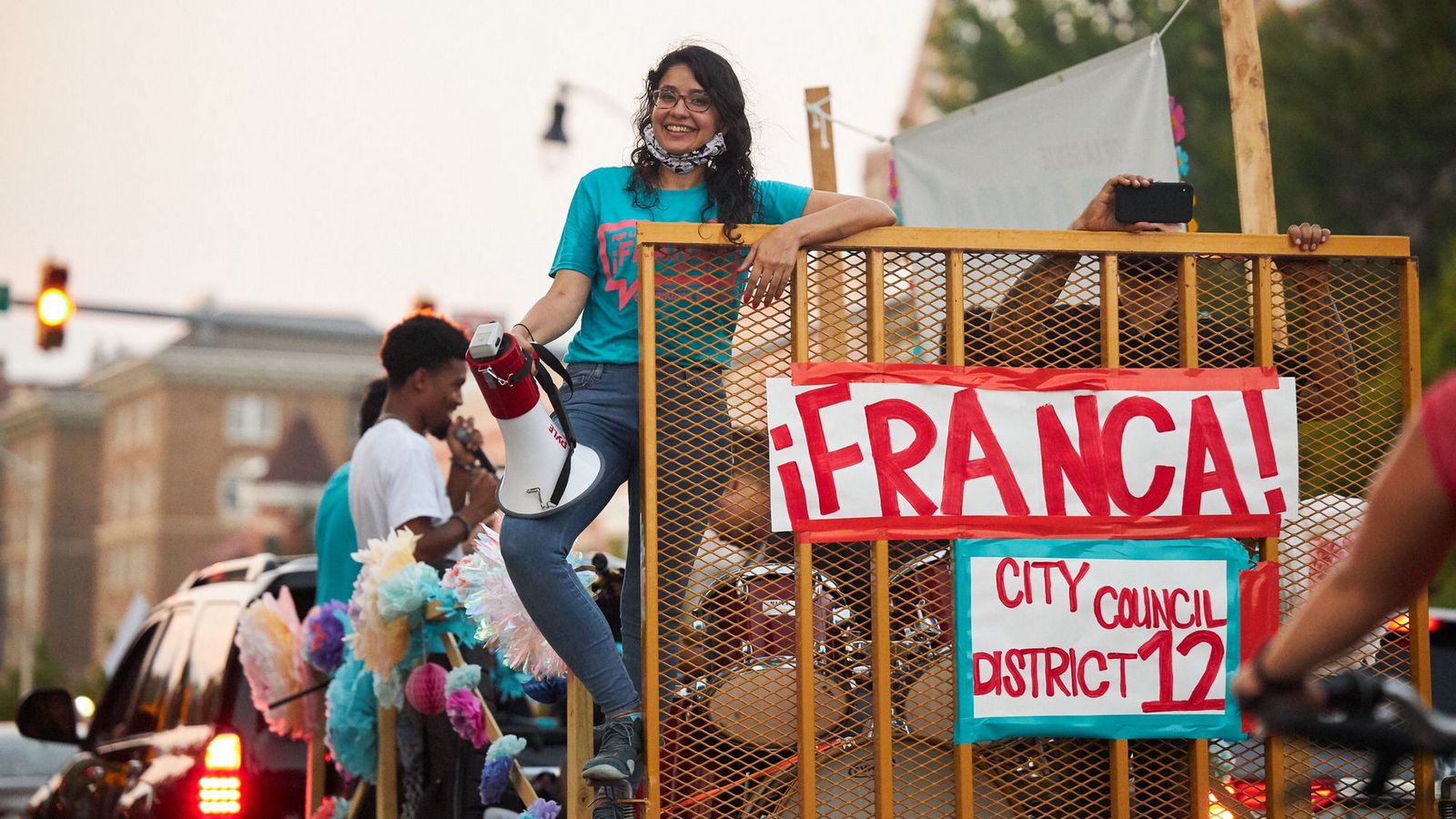 Franca Muller Paz upon the launch of her City Council campaign in July. (@FrancaMullerPaz)

A candidate who “gets it”

Now, on to this year’s elections.

Again, it seemed as if the general was an afterthought, a cakewalk for the Democrats. A case in point was Franca Muller Paz and her groundbreaking, though losing, Green Party campaign for the City Council’s 12th District.

The Baltimore Sun’s editorial board, it seemed, didn’t want to even consider it. Their general election endorsements skipped over the City Council races entirely.

How does a “newspaper of record” justify this? I ask this as a Sun subscriber. The paper’s glaring omission furthers the anti-democratic narrative that Baltimore must remain a monopolized, one party, one-mindset town.

The Sun’s general election endorsements skipped over the City Council races entirely. How does a “newspaper of record” justify this?

I connected with Muller Paz several months ago. Her platform spoke to everything that Baltimore needs: an equitable, fully funded school system, a government focused on workers instead of corporate interests, and a reformed justice system that serves our citizens rather than preying upon them.

It was the last piece that piqued my interest as a long-time public defender and advocate for equal justice. I reached out to Muller Paz about the specific challenges my clients face in the pretrial system, which few folks (no less, politicians) understand is run by the state – not the city.

We talked about how, while the bail system has improved, we have no pretrial public home detention option. Nor do we have the pretrial community treatment and monitoring capabilities that neighboring jurisdictions like Baltimore County have.

Muller Paz also talked about reforming policing. She sees the folks in jails and prisons as people who cannot be ignored by the political system.

It was clear to me, she gets it. She didn’t just spit out progressive lingo. She’s a veteran city teacher and union leader who walks the walk. She organizes, leads and, as I found out, listens.

She understands the disparate impact of our failing systems on Black and Brown people. And she raised money like crazy as a non-principal candidate with some important endorsements.

If we’re ever going to move forward in Baltimore, we need to embrace alternatives to the status quo with candidates like Muller Paz instead of blindly selecting the next Democrat that the establishment selects and The Sun endorses.

And it’s not just Council seats that need to be opened up.

Why didn’t we look harder at the race for City Council president amid revelations that the Democratic nominee, Nick Mosby, never explained his unpaid tax bills and will now be the recipient of $715,000 worth of mysterious jobs in his new office?

Shouldn’t we be more careful who we put in every office at a time when our last mayor, two state legislators and a recent police commissioner were sentenced to jail terms?

Take it from this registered Democrat: openness is the key to a better city.

Outsiders deserve your consideration. We need to stop writing off non-principal parties, empower their voters and treat their candidates equally in local contests.

• Todd Oppenheim is supervising attorney in the Baltimore City Public Defenders Office and a past candidate for Circuit Court Judge. The opinions expressed are his own. Twitter: @Opp4Justice.