The battering and bruising of Black residents at the hands of Baltimore police are documented in stark numbers in a report issued yesterday by the American Civil Liberties Union of Maryland.

Based on the first-ever analysis of data required under the city’s consent decree with the U.S. Department of Justice, the report found that 22,884 “use of force” incidents took place between officers and citizens from 2015 through 2019.

That’s an average of 12 violent encounters every day between the police and the policed.

The report found that officers used their fists, feet, hands and knees in 59% of the “force incidents” and deployed firearms in 22%.

When giving chase, police were seven times more likely to engage in “forcible takedowns” rather than “tackling without injury.” Tasers were used in 2,013 cases, while less-lethal pepper spray was deployed in 252.

The citizens swept up in these confrontations, regularly resulting in civilian injuries and big lawsuits paid for by Baltimore taxpayers, were overwhelmingly Black.

“Black communities face the paradox of being both over- and under-policed, criminalized at higher rates than whites for petty offenses, without the protection they need against serious threats that police are supposed to provide,” the report, “Chasing Justice,” notes.

Of those 22,884 force incidents documented by the ACLU, 90.7% involved Black citizens (who make up about 63% of the city’s population).

White citizens experienced only 7.3% of all force used by police, according to the report. 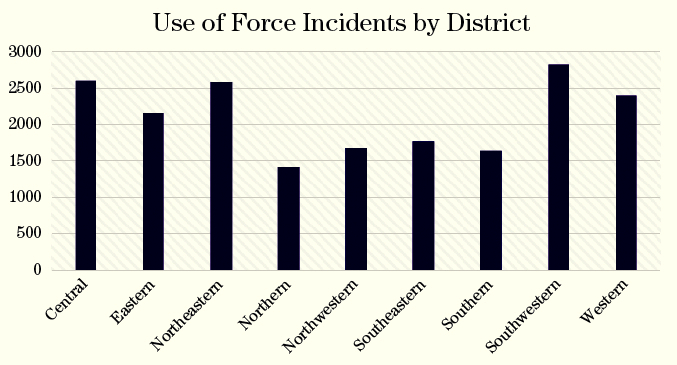 Use of force by police are more frequent in Black-populated police districts (such as Western and Southwestern) than in the more racially balanced Southern and Northern districts. (“Chasing Justice”)

Most strikingly, the vast majority of force cases involved neither serious threats to public safety nor resulted in serious criminal charges.

“Officers cited self-defense and defense of others at low rates for why they used force,” noted the report’s author and numbers cruncher, Joe Spielberger, a public policy counsel for the ACLU.

Defending themselves or protecting others from harm was cited by police in just 11.4% of force encounters. In fully 81% of the cases, the officer justified use of force to subdue a suspect who was “combative” and “resistant” or to “gain tactical advantage.”

These and other statistics “contradict the narrative that police are responding to serious crimes” when they get entangled in violence with residents, according to Spielberger.

In fact, he found that arrests after a force incident typically involved low-level charges, such as drug possession, disorderly conduct, resisting arrest and traffic violations.

Only a small number of use of force cases involve self-defense, defense of others or making an arrest. (“Chasing Justice”)

Last week, the Board of Estimates approved a large settlement to a man who suffered permanent brain damage from just such an incident: Why didn’t the officers in a $550,000 police settlement face discipline?

The report zeroes in on persistent racial bias by the Baltimore Police Department, identifying individual officers with long records of citizen complaints covered up by police disciplinary procedures and the privileges offered by the Maryland’s oft-criticized Law Enforcement Officers’ Bill of Rights (LEOBR).

Of the 13,392 complaints of misconduct filed against city officers between 2015 and 2019, those submitted by white residents were nearly twice as likely to be sustained by the department as those filed by Black residents.

In either case, however, “only a small percentage of complaints” were  substantiated by the department’s internal procedures – and an even smaller number resulted in any discipline.

A sampling of more than 130 officers who have had excessive complaints about their behavior and BELOW officers specially cited for alleged assault and violence against civilians. (“Chasing Justice”) 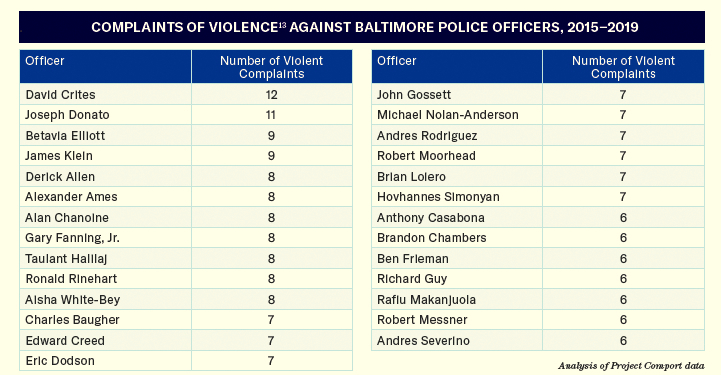 The report found that 33% of all complaints were lodged against just 6% of Baltimore police officers – a logical outcome, according to Spielberger, of laws and procedures that protect violent and sometimes corrupt officers.

Stripping away their anonymity, Spielberger identifies more than 125 of the officers by name in the report.

Heading the list is Wayne Jenkins. The ringleader the Gun Trace Task Force became the subject of 227 complaints, 36 of them sustained by the department.

33% of all complaints were lodged against just 6% of Baltimore police officers  – ACLU’s “Chasing Justice.”

Despite these warning signs, he thrived in the department, promoted and awarded crime-fighting medals. Jenkins is now in federal prison for the crimes he committed with a BPD badge and gun, including breaking and entering, stealing drugs, robbing citizens, falsifying official reports and committing overtime fraud.

His fellow GTTF colleagues, Evodio Hendrix, Jemel Rayam, Daniel Hersl, Marcus Taylor, Maurice Ward and Momodu Gondo, collectively compiled over 700 complaints that did not interrupt their careers – or crime spree – at BPD until they were caught and indicted by federal authorities in 2017. They, too, are now serving jail time.

The corrupt GTTF members were removed from the force thanks to federal prosecution. But that outcome was unusual, the report makes clear.

Some examples from yesterday’s report:

• Akeem Nelson had a sustained DWI complaint in 2015. He remained on the force despite complaints of excessive force, sexual misconduct and theft before he was arrested for a hit-and-run in March 2020.

• Leon Riley was the subject of multiple lawsuits and complaints involving false imprisonment, excessive force, abusive language, and improper search and seizure before being charged last year with first-degree assault, reckless endangerment and misconduct in office.

• Ethan Newberg, the highest-paid officer in Baltimore due to extensive overtime, was indicted in 2019 on 32 counts of harassing, intimidating and wrongfully detaining mostly Black youth while patrolling the Inner Harbor.

Another case cited involved Arthur Williams, who racked up 24 complaints during his first 22 months as a sworn officer. In 2018, he was caught on video repeatedly punching a man on an East Baltimore street, who was subsequently hospitalized with fractured ribs and a broken jaw.

National exposure of the video ended Williams’ tenure with the BPD, and he was later found guilty of second-degree assault and official misconduct.

Despite media attention given to videotaped beatings and the crimes of GTTF members, Baltimore police continue to accumulate the same complaints of excessive force, false arrest and theft. “It is only the names that change. The cycle continues, uninterrupted,” the report soberly concludes.

Despite the summer-long Black Lives Matter protests in Baltimore, the author writes, “there is no real incentive for [police] to change” as long as LEOBR remains untouched by the General Assembly.

Just as likely, according to Spielberger, will be another incident in a Black neighborhood along the lines of the 2015 in-custody death of Freddie Gray, inciting another round of unrest, violence and finger-wagging by politicians like Maryland’s Larry Hogan.

Since Gray’s death and the many revelations about racial targeting and criminal behavior by police, the report says, the Republican governor “has not prioritized inequity in policing” but instead “chastises Black residents about crime.”