Lisa Kraus and Jason Shellenhamer admit it: When they began their search for Native American artifacts at Herring Run Park in northeast Baltimore, their expectations were low.

In a city that has seen centuries of human habitation and development and little urban archaeology in recent years, they figured they might find a few small flakes of chipped stone.

Instead the archaeologist couple found a trove of projectile points, drills and other artifacts that humans fashioned from stone some 5,000 to 9,000 years ago.

From the more recent Woodland Period, they found pottery shards, some handsomely decorated.

The duo is still studying the artifacts, but they know enough to conclude the spot was probably used as a seasonal hunting camp for many centuries before the arrival of Europeans.

“It’s a shocker for Baltimore,” said Kraus, who has been working in the park with Shellenhamer since 2014 as part of the Herring Run Archaeology Project they founded.

“We just added as many as 9,000 years to the history of Baltimore City,” she told The Brew, explaining that archaeological work on pre-contact peoples trailed off after the 1980s.

“Artifacts of this kind have been found all over Maryland, but they have not been found for a very long time in Baltimore city,” said Kraus. 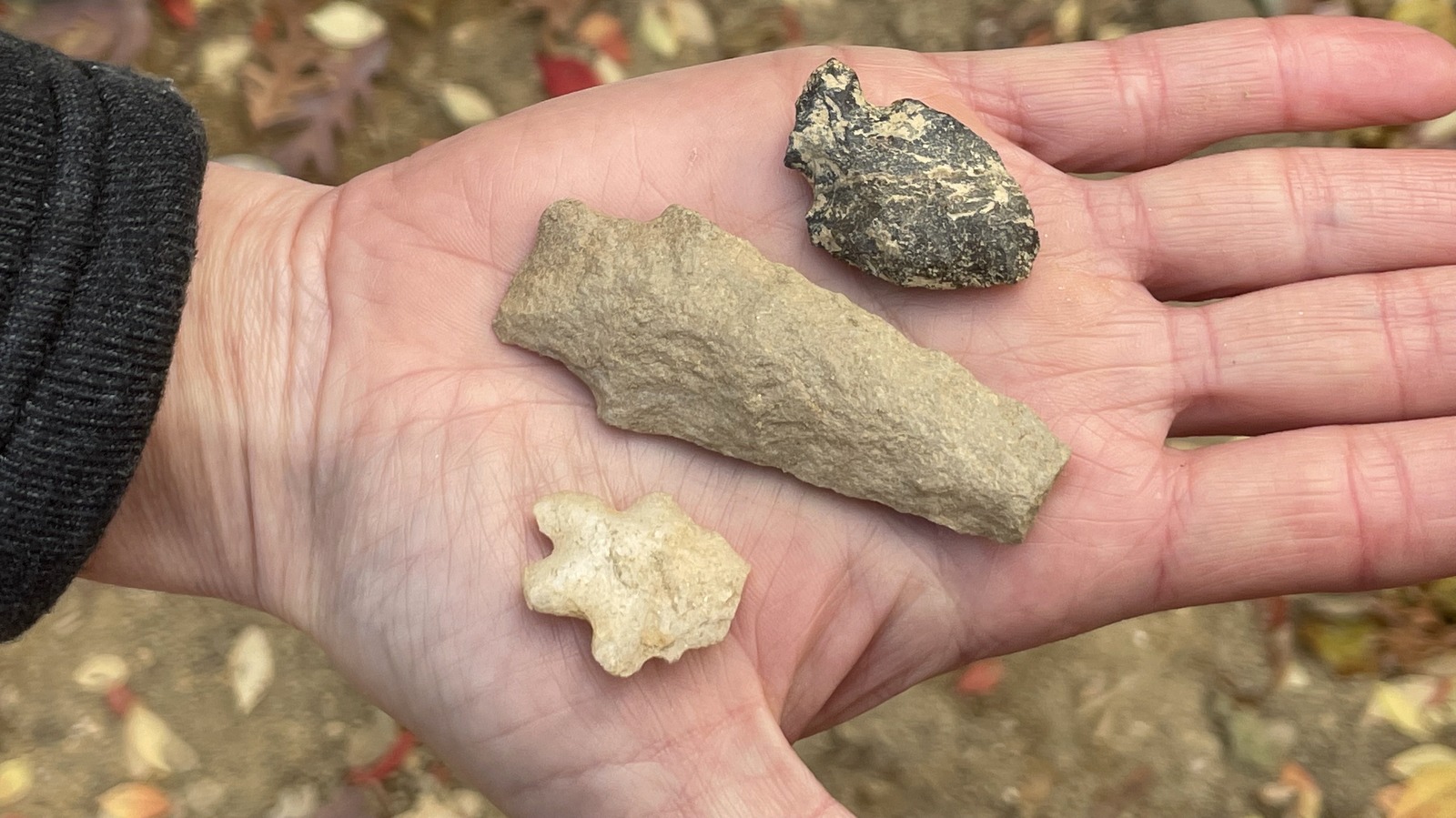 The discovery has been exciting not just for the project leaders but for the neighbors who’ve come to watch, the online followers who view the videos of their latest finds, and the volunteers who have been assisting at the site, digging and sifting in the chilly fall weather.

“These two volunteers screamed, and we ran over,” Kraus recalled, bringing a reporter to an unremarkable looking spot where the first projectile point was found.

It was right on the surface, just a couple of inches down, on their first day of digging. 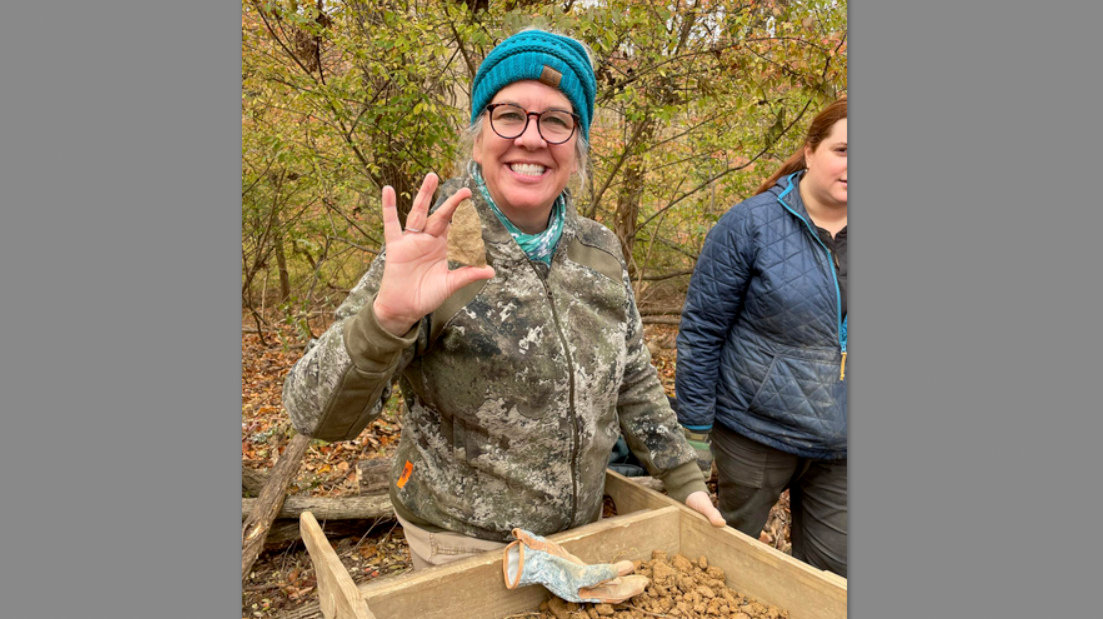 Shellenhamer and Kraus, who live in the nearby Lauraville neighborhood, have been running the free, community-based, public archaeology program on a volunteer basis for the last seven years.

Both have day jobs in their field, Kraus with the Maryland Environmental Service and Maryland State Highway Administration; Shellenhamer as a consultant for a private company.

Until recently, their exploration of the park has focused on the Eutaw Manor Site. Once the heart of the Eutaw Farm Plantation during the 18th and 19th centuries (it burned down in 1865), it’s a place where free and enslaved African Americans once lived and worked.

Their efforts to learn more about the area’s Native American peoples are part of a new partnership with the Friends of Herring Run Parks, which has a state grant to create a Herring Run Parks Heritage Trail.

“They wanted to be as inclusive as they can be about whose heritage this is” – Lisa Kraus.

Ensuring that the trail fully recognizes and honors all who have lived there was important to the organizers.

“They want to be as inclusive as they can be about whose heritage this is,” said Kraus, who is working with an expert from Coppin State University to get funding for further study of the African American and other former inhabitants of Eutaw Farm.

“We just weren’t certain how deep native American history goes within the city limits,” she said. “We knew it was probably here, but it’s something different when we can show the neighbors across the street, ‘Look, here it is!’”

Standing on the wooded bluff above the sparkling waters of Herring Run yesterday, the archaeologists answered one of the questions they are most frequently asked: How did you know to pick this spot?

It just seemed to have attractive features: two freshwater springs, the nearby river providing fish to catch and the wooded area offering deer, rabbit and perhaps bear and other animals to hunt.

A couple of shovel tests turned up enough artifacts to encourage them to explore more fully, digging five-foot-square trenches over two weekends in October. 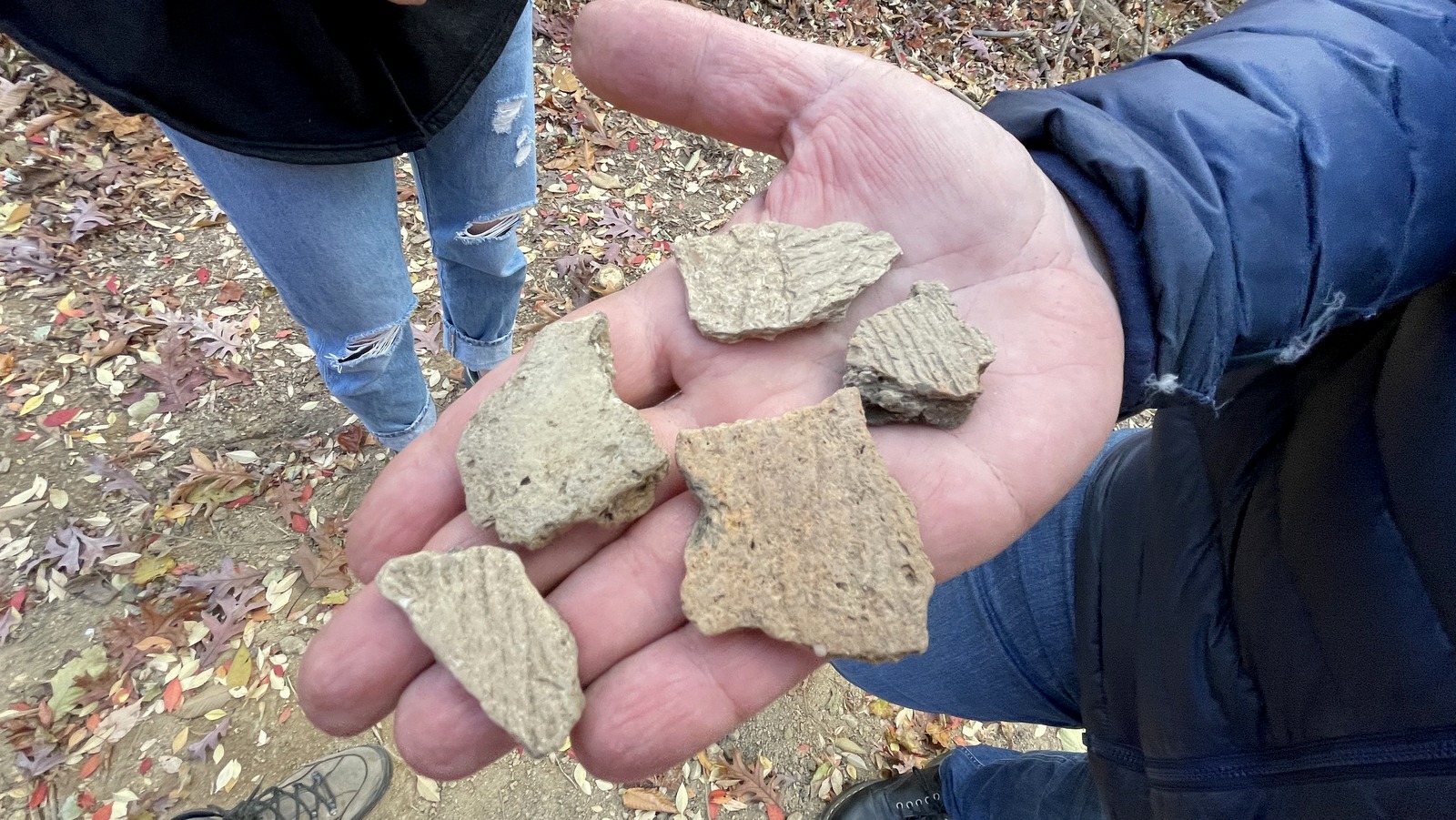 Pulling out plastic zip-lock bags with artifacts, Shellenhamer showed off some of their favorites. There was a white, somewhat star-shaped LeCroy projectile point made from quartz.

“It’s one of the most distinctive you can find,” he said.

The materials used in some cases were evidence of trading or migration patterns. Shellenhamer brought out a yellowish unfired projectile point made of jasper, indicating it came from elsewhere, possibly Pennsylvania or northern Virginia.

Another piece, brown-banded chert, would probably have come from the D.C. area.

Kraus showed off details like the bits of shell visible in the pottery shards, added to make the clay more workable. Some pieces they found are “pre-forms” – incomplete for whatever reason, but still identifiable.

“This was going to be an awl that would have been used maybe to punch holes in hides,” Shellenhamer said. “It never got finished.” 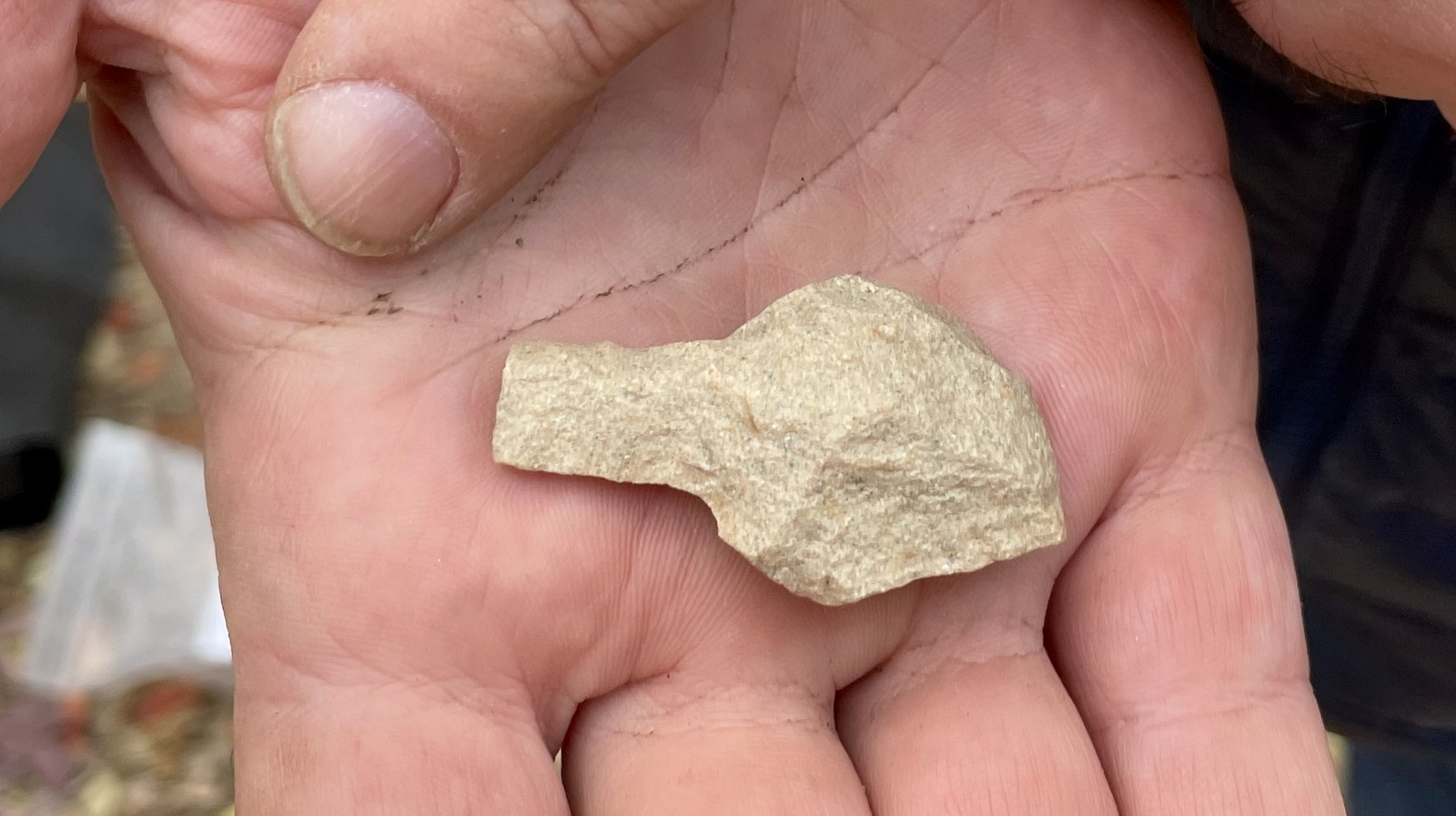 A quartzite drill was almost finished when the tip apparently broke. (Fern Shen) 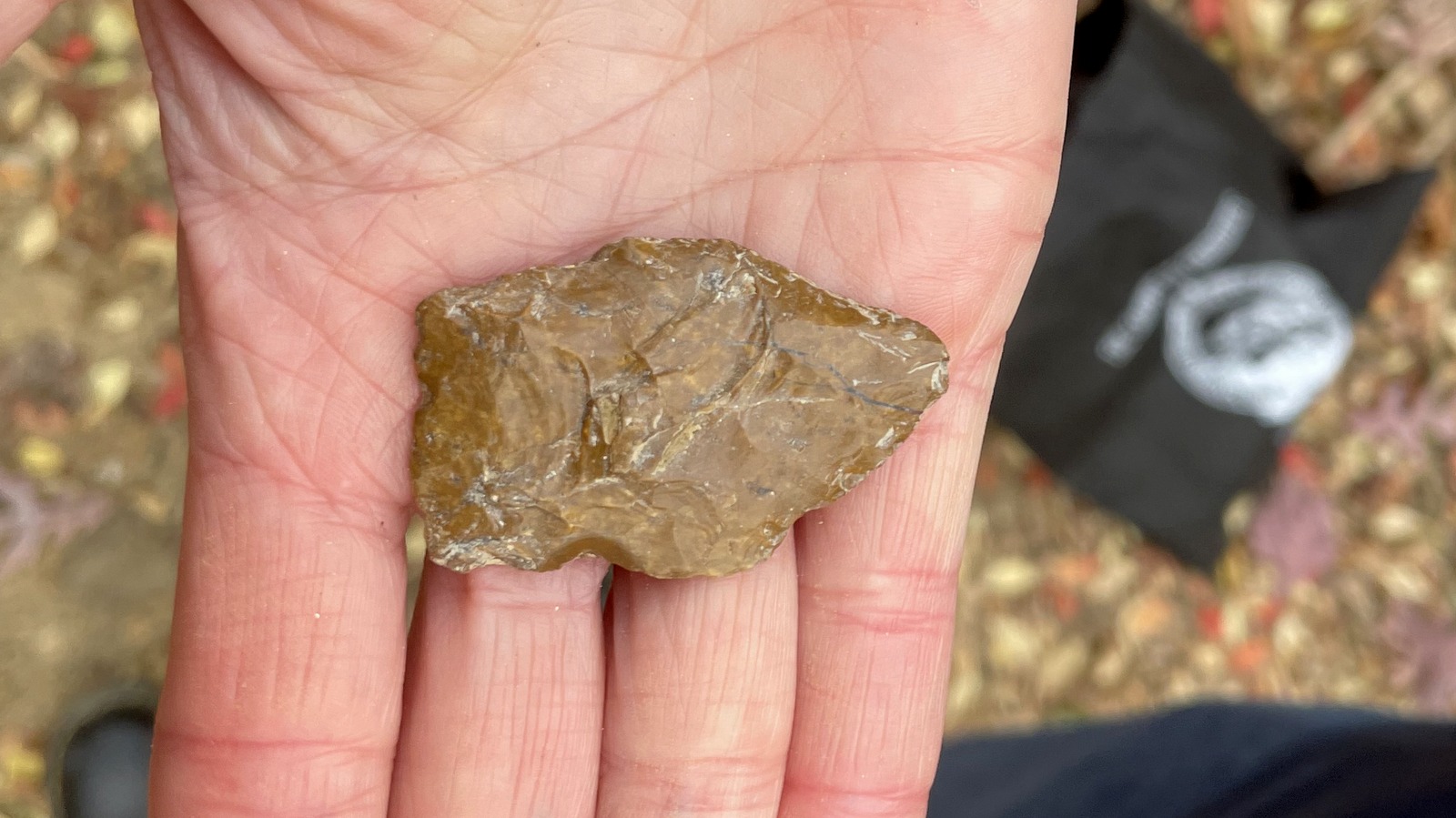 One frequent question they are asked is how they date the items they find.

Shellenhamer said they are able to classify items according to their “typology,” the physical characteristics of how artifacts like projectile points or awls are made.

Archaeologists working elsewhere in the region have used carbon dating, of charcoal and pieces of wood, to date these typologies that vary over time and location.

One resource is the state “projectile point homepage” with helpful information on ancient Maryland, artifacts including pottery.

Enthusiastic about their work, the couple are eager to get their excitement across to the public.

“It was a real art to make these. It doesn’t matter that they were made for a functional purpose, they’re so beautiful ” Kraus said at one point.

No question, it seems, is too ridiculous. Was this the end of the Ice Age? Could the people using these tools have been hunting woolly mammoths? No, that would have to have been more than 12,000 years ago, Kraus explained.

They were also asked if fieldwork at the site is continuing (probably not until the weather warms up) and what will happen next to these artifacts?

They plan to spend the winter assembling a detailed report on their findings to submit to the city (Commission for Historical & Architectural Preservation) and to the Maryland Historic Trust.

They also plan to make a presentation to the Maryland Commission on Indian Affairs and work with them to make sure full tribal consultation takes place. 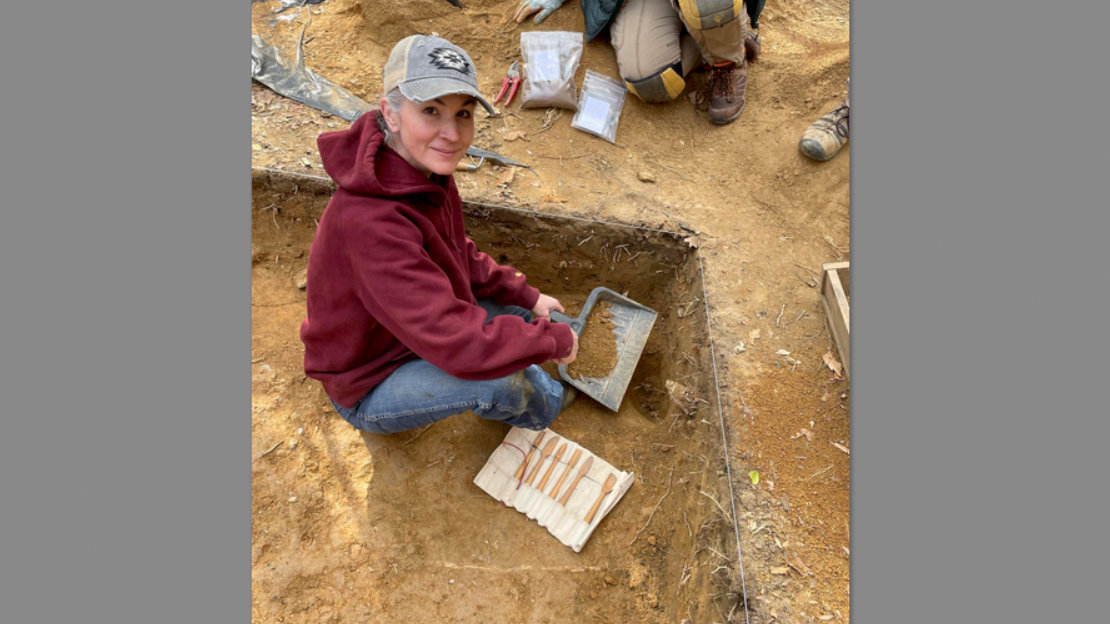 Lisa Kraus at the site on the last day of work. The excavation squares have since been filled in. (Jason Shellenhamer).

Shellenhamer said city officials have agreed to eventually “deed of gift” the artifacts over to the Maryland Archaeological Conservation Laboratory in Calvert County, where they would remain available for researchers and others to study. Technically, the artifacts the project unearthed belong to the Mayor and City Council.

That’s a concerning thought for the archaeologists, who say there’s a good chance there are many similar pre-contact-era artifacts waiting to be found in city parks, which sit on the site of former farms and other never-developed land.

“It’s upsetting to us to sometimes see litter and pollution and disturbances in these places,” Kraus said. “I hope the city can put some protections in place for what’s here.”