At a polling place in Locust Point, asked what’s on their mind on this primary day, almost every voter buttonholed said pretty much the same thing:

Some, like Democrat Lisa Nguyen, had a preference: defense attorney Ivan Bates, who is challenging Mosby.

“We need someone with a strong moral compass and ethical standards,” said Nguyen, who was wearing a Bates tee shirt and carrying a sign that said, “Thiru makes women uncomfortable.”

That was a reference to Mosby’s other opponent, former city and federal prosecutor Thiru Vignarajah, the subject of media reports quoting some former subordinates saying his behavior towards them was abusive. 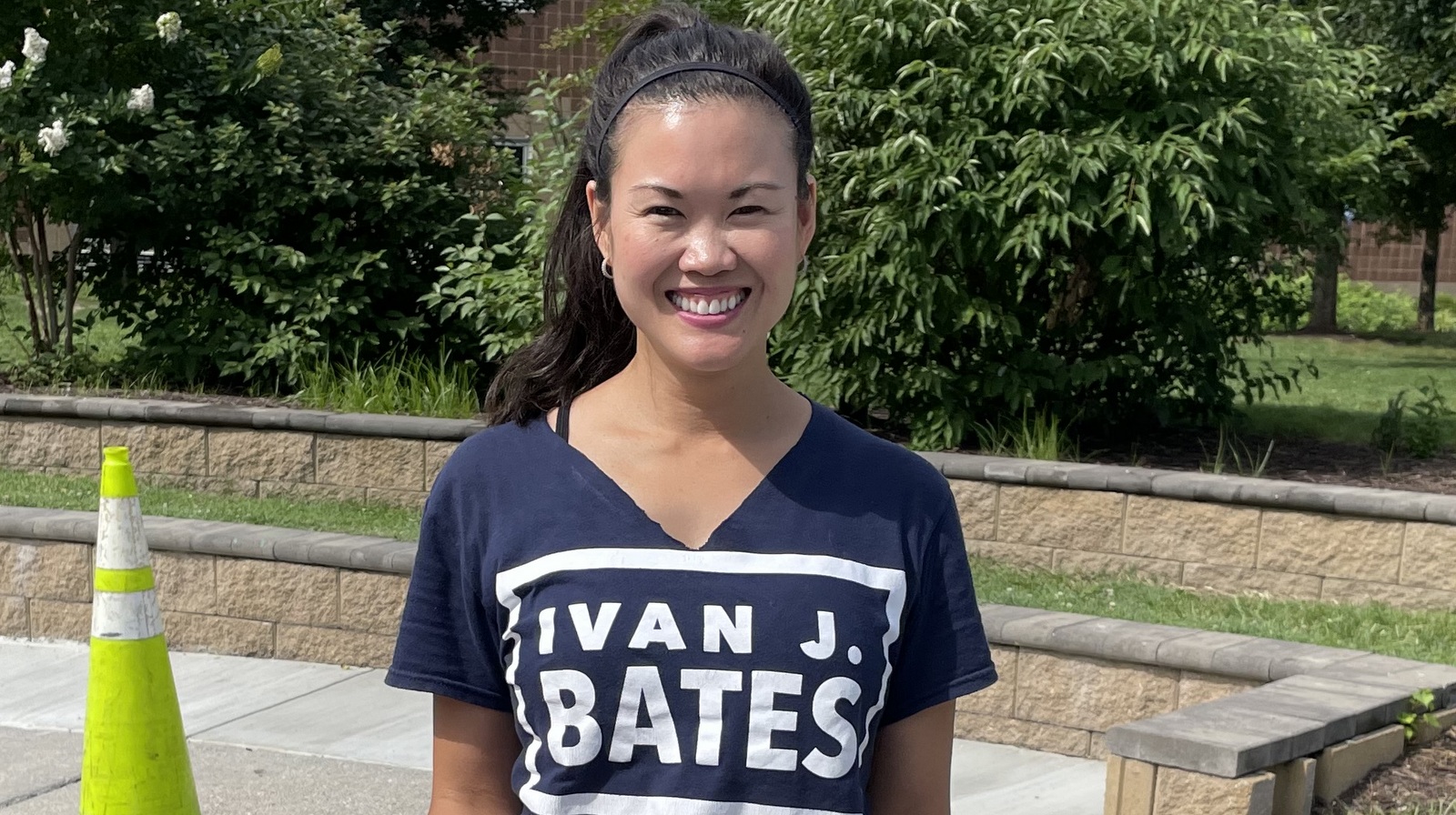 Lisa Nguyen said she volunteered for the Ivan Bates campaign because crime is out of control . “My family members are afraid to come into town.” (Fern Shen)

A Vignarajah voter, meanwhile, said those reports did not concern her.

“As long as he didn’t touch any of these women, I don’t care. We all get out of hand sometimes,” said Ronnie Wilson, who was waiting to vote at a fire station in Hampden.

A steamfitter who moved here from New York, Wilson said crime issues also were her main concern, and Vignarajah was her choice to tackle them.

“He’s articulate. He’s intelligent. He’d be good,” she said, as a fire truck pulled into the building and voters patiently stood in line. 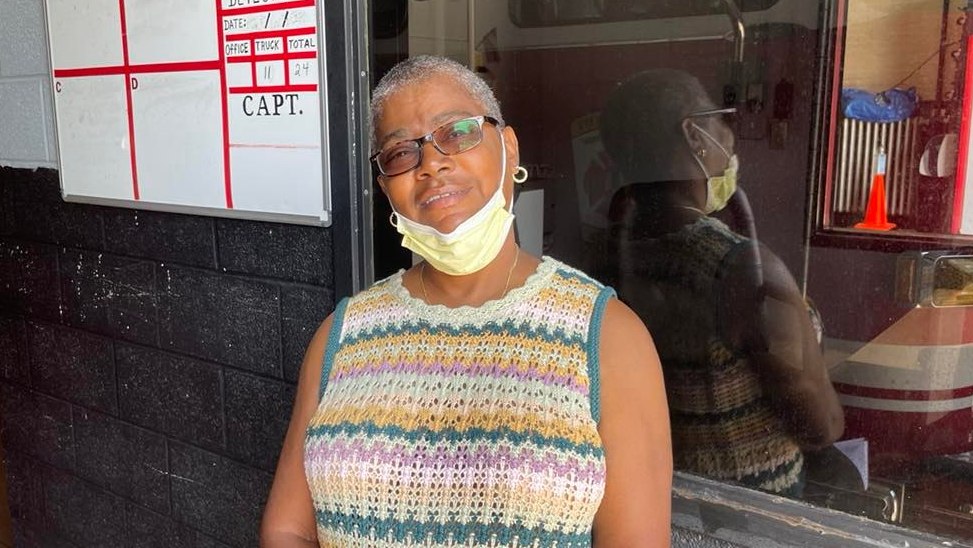 Such were the scenes from a primary that was decidedly low key and low turnout, delayed by redistricting and held on a broiling midsummer day.

Despite the contested race for Baltimore’s top prosecutor, precincts across the city had only a relative trickle of voters. By mid-morning, for example, only three people had cast a ballot at the Keswick Multicare Center across from the Rotunda.

Other local races created interesting match-ups, like District 43-A where six candidates are vying for two seats.

Delegate Regina Boyce, the only incumbent running, formed a slate with attorney Elizabeth Embry. But the district’s senator, Mary Washington, has endorsed candidate Logan Endow. (The district, with new borders as a result of redistricting, has also suffered persistent problem with incorrect ballots.)

A competitive sheriff’s race with Sam Cogen challenging longtime Sheriff John Anderson, a lively five-way match-up for Clerk of the Circuit Court, and a down-ballot (but very heated) race for Democratic Central Committee in the 41st District are also in play today.

Polls were to open at 7 a.m., but many in the city opened late – including the Central branch of the Enoch Pratt Library downtown and Mount Washington Elementary/Middle School uptown – due to under-staffing.

“It’s been a really slow day. It’s an important election and no one is showing up,” said Lee Raskin, a lawyer and Embry supporter.

“There’s a lot of people dropping off ballots though, so there’s that,” said Raskin outside a polling place in Charles Village. “I really hope more people show up. This election is so important.” 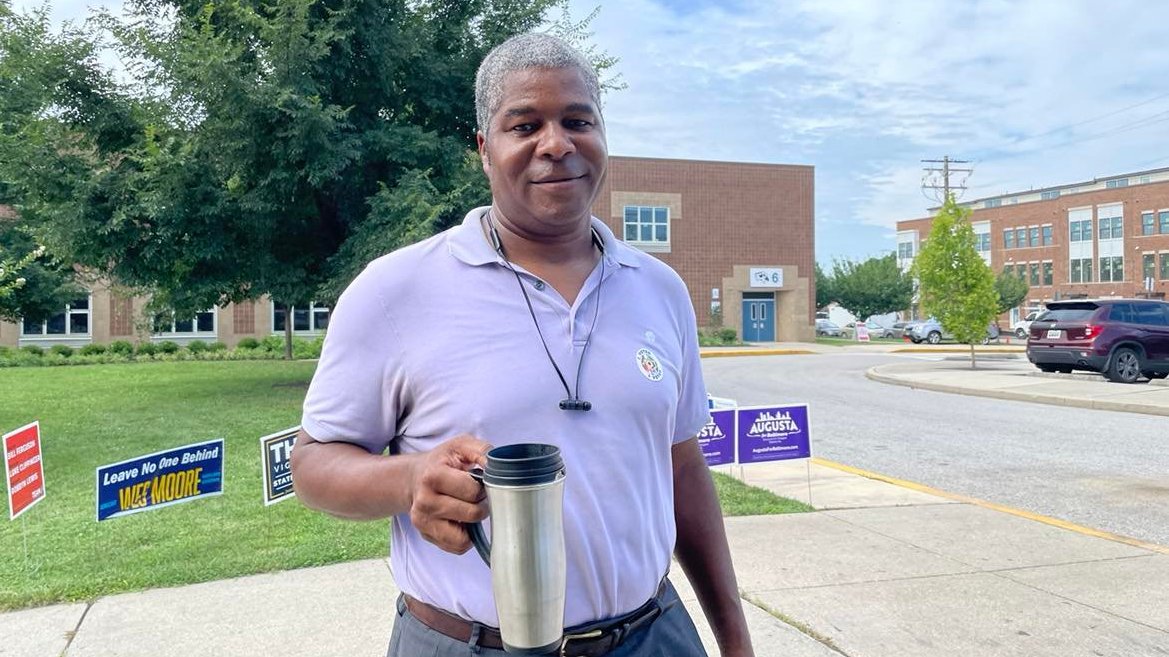 The policies the state’s attorney has put in place are not necessarily bad, but they aren’t working, Riverside resident Geoffrey Washington said, after voting today. (Fern Shen)

“A lifelong Democrat until…”

Several people we encountered who had strong opinions on crime, punishment and the state’s attorney’s race were unable to vote. Why?

Because these once rock-solid Democratic voters had switched their affiliation to the Republican Party.

“I was a lifelong Democrat until we had those riots,” said the woman, referring to the 2015 Uprising after the in-custody death of Freddie Gray.

“It seems like the Republicans are more for law and order” – a South Baltimore voter.

“I’m not happy with the direction toward lawlessness. It seems like the Republicans are more for law and order,” she said, declining to give her name.

She had no one to vote for for state’s attorney because no Republican filed to run for that position in today’s primary.

Had she still been a Democrat, her pick would have been Vignarajah. She did, however, have someone to vote for in the Republican primary, GOP gubernatorial hopeful Kelly Schulz.

“We need to clean house”

Another Republican convert who voted in Locust Point was Tom Rossbach, a retired engineer who worked for the Army Corps of Engineers for 40 years.

His wife, Anne Rossbach, said she had made the same switch.

“We need to clean house,” Tom Rossbach said, inveighing against Mosby for her policy of not prosecuting certain low-level crimes and offering a motto he wishes the city would adopt: “Let’s make crime illegal again.”

Rossbach said he switched to the GOP to vote for Donald Trump (“It turned out he did good things!”) and would have voted for Vignarajah if he had still been a registered Democrat.

He would have voted for Vignarajah if he had still been a registered Democrat.

The recent incident at the Inner Harbor in which a squeegee worker fatally shot a bat-wielding motorist “has me ready to move out of the city,” Rossbach said.

Generally sharing his view was an African-American man and his wife.

White Baltimoreans are not the only voters who have made the switch to the GOP out of disappointment with the party they grew up on.

“It’s sad. We found out that everything stays the same with them,” the retired maintenance mechanic said, referring to Democrats.

He and his wife of 50 years (who had switched her registration to Independent from Democrat) spoke to The Brew after voting at the Christ Church Harbor Apartments polling place on Light Street.

Their complaints were mostly about Democrats mishandling the economy in ways that cut into their retirement savings and creating too many government “handout programs” that create dependence, she said.

“You see these kids out on the corner and their mothers aren’t making them go out and get a job,” she continued.

“They have these programs, like Job Corps – I did that when I was 20 – but then you’re supposed to learn a trade and go to work,” her husband said, adding that the programs like that now are not being properly monitored.

“There should be a sign over this town: ‘Gimme, gimme. Can you spare? That’s why we never get nowhere!’” he said in frustration, explaining who he would have liked to vote for for state’s attorney: Vignarajah.

The former Democrat had a plan, though. “I”ll vote for him when he runs for mayor.”