Nick Mosby’s chief of staff, who traveled 3,700 miles to Oxford, England to attend a $1,359-a-day “chief of staff executive” course earlier this month, was granted full travel reimbursements today by the Board of Estimates.

The retroactive award of over $9,000 came despite the fact that the aide, Lawrence Rasad Anderson, went abroad for a week (from September 3 to September 9) without board approval.

The Baltimore Administrative Manual states that “The Board of Estimates must approve requests for travel prior to the date of the planned travel” (AM-240-3).

The same set of rules requires prior board approval of any trip that “will require travel outside the lower 48 states of the United States” and for any trip that “involves one or more weekend days” (Anderson was absent during two weekends).

A city employee “is expected to present his Expense Report at least 20 calendar days or more in advance of the travel date,” the rules say, adding, “Planning should be done at least 30 days before the travel date to maximize City savings for air travel and conference registration costs.” SEE Full Text of BOE’s Approval of Employee Travel below.

Anderson and Mosby have not responded to requests for comment by The Brew.

At the start of today’s meeting, it was announced that Mosby would abstain from voting on the item that corresponded to his aide’s $9,144.77 travel request.

Although it was listed on his public calendar this morning, Mayor Scott did not attend the BOE, with Shorter acting on his behalf.

Asked why the mayor was absent at the meeting, spokeswoman Monica Lewis issued this statement to The Brew:

“As mayor of a major city, it’s not uncommon for a scheduled event to be changed. Mayor Scott is well and there were not emergencies that needed his attention. As the approved charter states, in the event that the Mayor is unable to attend, the City Administrator will sit in their place, which is what happened this morning.”

His attendance at the meeting was subsequently scrubbed from Scott’s calendar.

Mosby’s budget for the current fiscal year is up 8.5% from last year – and fully 66% above his budget when he was elected as City Council president in November 2020.

For his part, Comptroller Henry, a self-described fiscal watchdog, issued a statement about his abstention, saying, in effect, he would not vote on how another elected official decides to use his office’s funds.

“I am abstaining from this item because it is an expenditure from a component of an elected official’s budget that was approved as part of the annual appropriations process. As I explained publicly when amendments to the Administrative Manual’s travel provisions were enacted in 2021, elected officials are directly accountable to the voters for their use of taxpayer funds.”

Much of the increase came from creating new positions in Mosby’s office “to provide fiscal analysis and administrative support,” according to the budget office.

There is is no public breakdown of travel expenses allowed for elected officials and their staffs. 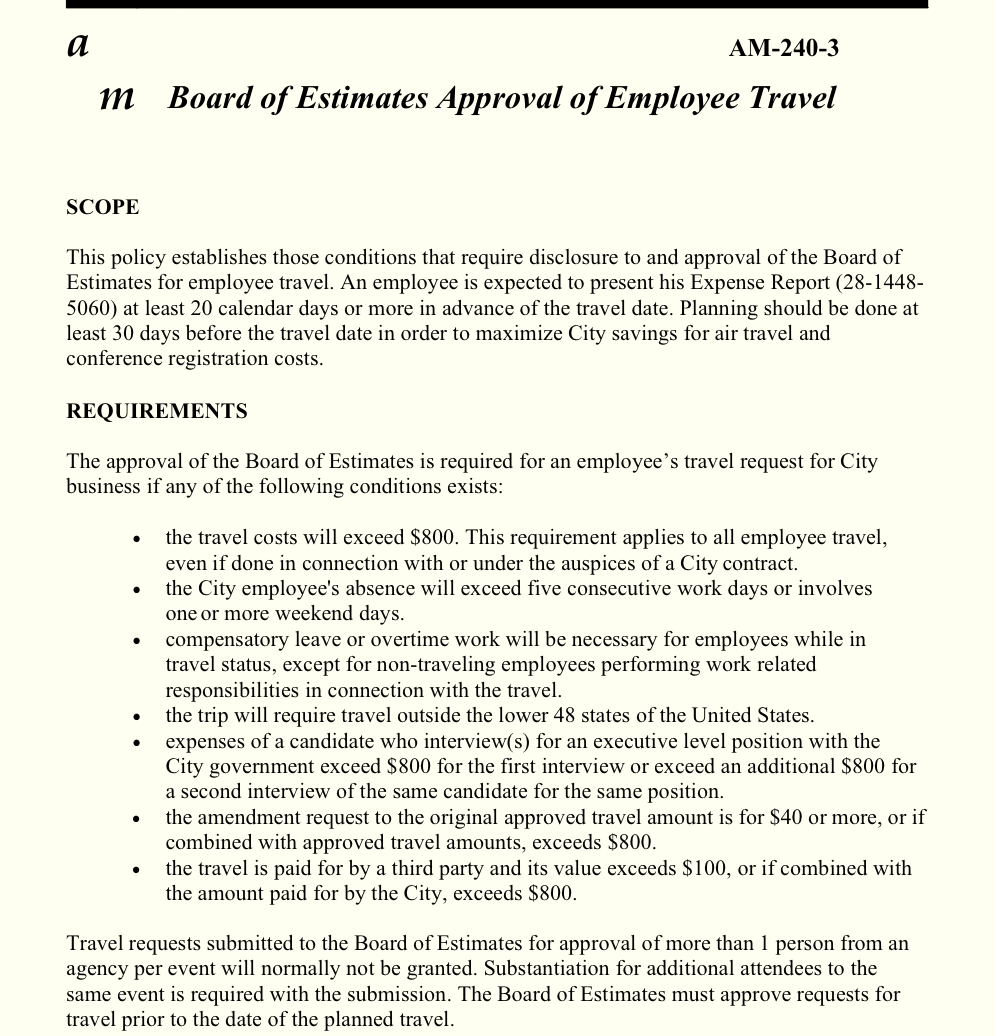 NOTE THE LAST SENTENCE: “The Board of Estimates must approve requests for travel prior to the date of the planned travel.” (Baltimore Administrative Manual)