Two of Baltimore’s most prominent and controversial officials report that their campaign committees have gone bust.

Indicted State’s Attorney Marilyn J. Mosby and her husband, City Council President Nick Mosby, each filed reports last week to the State Board of Elections saying their campaign bank accounts had $0.00 in funds, even though, elsewhere in the same reports, cash surpluses are listed by a computer-generated program.

Coming off her loss to Ivan Bates in the Democratic primary, Marilyn Mosby’s “Friends” committee reported $12,874.79 in cash in its bank account on August 23.

Two months later, on October 23, the committee said it had no money at the Harbor Bank of Maryland account.

This statement – which Mosby vouched under the penalty of perjury as “true to the best of my knowledge, information and belief” – came despite the fact that the campaign listed no expenditures between the August and October dates.

Last week, in a post-gubernatorial report to the Elections Board, “Friends of Marilyn Mosby” again reported $0.00 in the bank, even though the computer-generated program calculated that the committee had $12,874.79 in cash.

As chair of “Friends of Marilyn Mosby,” the state’s attorney of Baltimore affirms that her November campaign report was “true” to the best of her knowledge and belief.

No money was reported in the account on November 15, 2022, even though the campaign reported no expenditures in November and, before that, no expenses in September and October: 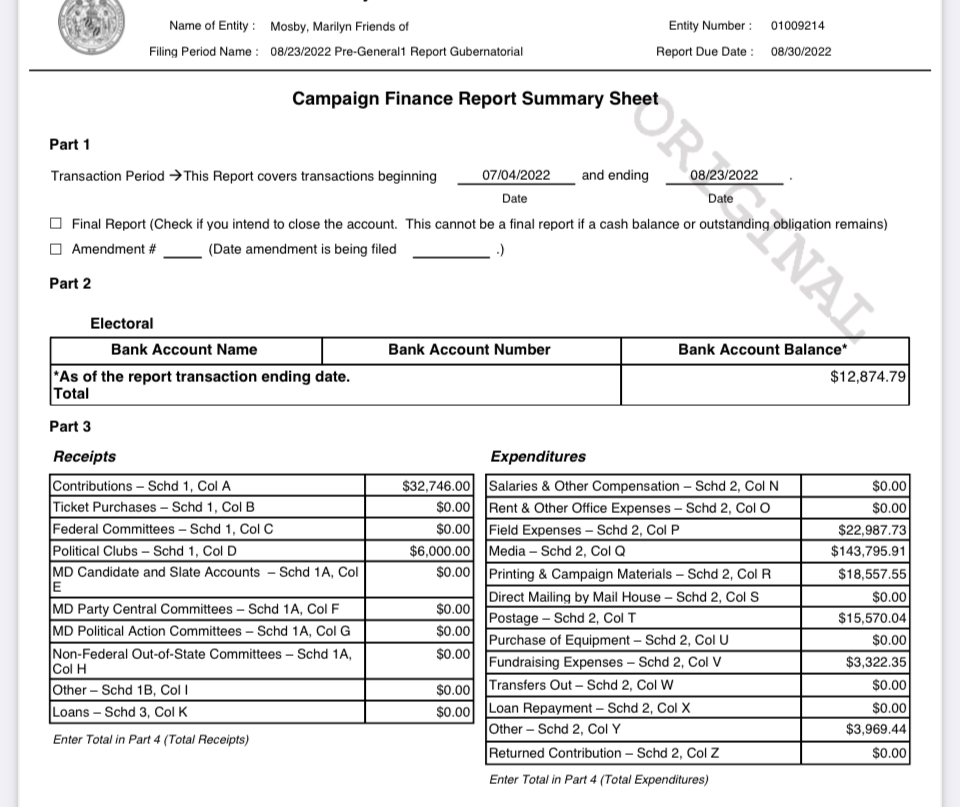 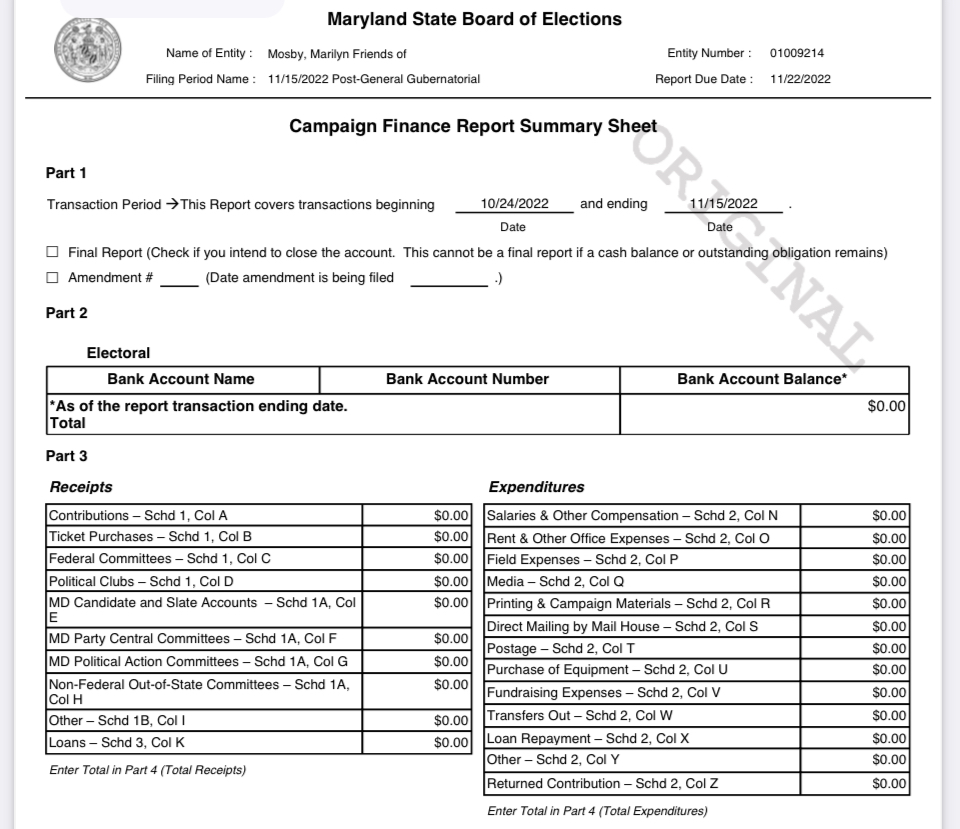 The Brew has repeatedly pointed to errors and inconsistencies in Marilyn Mosby’s previous reports to the Elections Board, including citing her long-dead grandfather as a campaign contributor and listing wrong addresses for staff at the state attorney’s office who made donations.

Mosby has never been subjected to an investigation by the State Prosecutor’s Office for campaign finance violations. Instead, she has been allowed to amend her reports to correct the errors.

Recently, however, her committee was fined $935 by the Elections Board for filing late reports.

• Giving from the grave? Marilyn Mosby’s dead grandfather contributed to her and her husband’s campaigns (3/23/22)

But the report was subsequently amended to say nothing was in the account after $3,000 was spent on a fundraiser for Democratic gubernatorial candidate Wes Moore.

This was followed by a report saying that $1,163 was actually in the bank. On the same day, however, the bank amount was changed back to $0.00.

The latest report says that the committee made a single expenditure between late October and November – $37.44 for checks from the Deluxe Corp.

The nation’s premier producer of bank checks, Deluxe has long been headquartered at 3680 Victoria Street North in Shoreview, MN.

Last year, Deluxe moved to downtown Minneapolis with a new corporate address at the 801 Marquette Building. Mosby’s November 22 report lists the company’s former Shoreview address as the place where it sent the campaign funds. 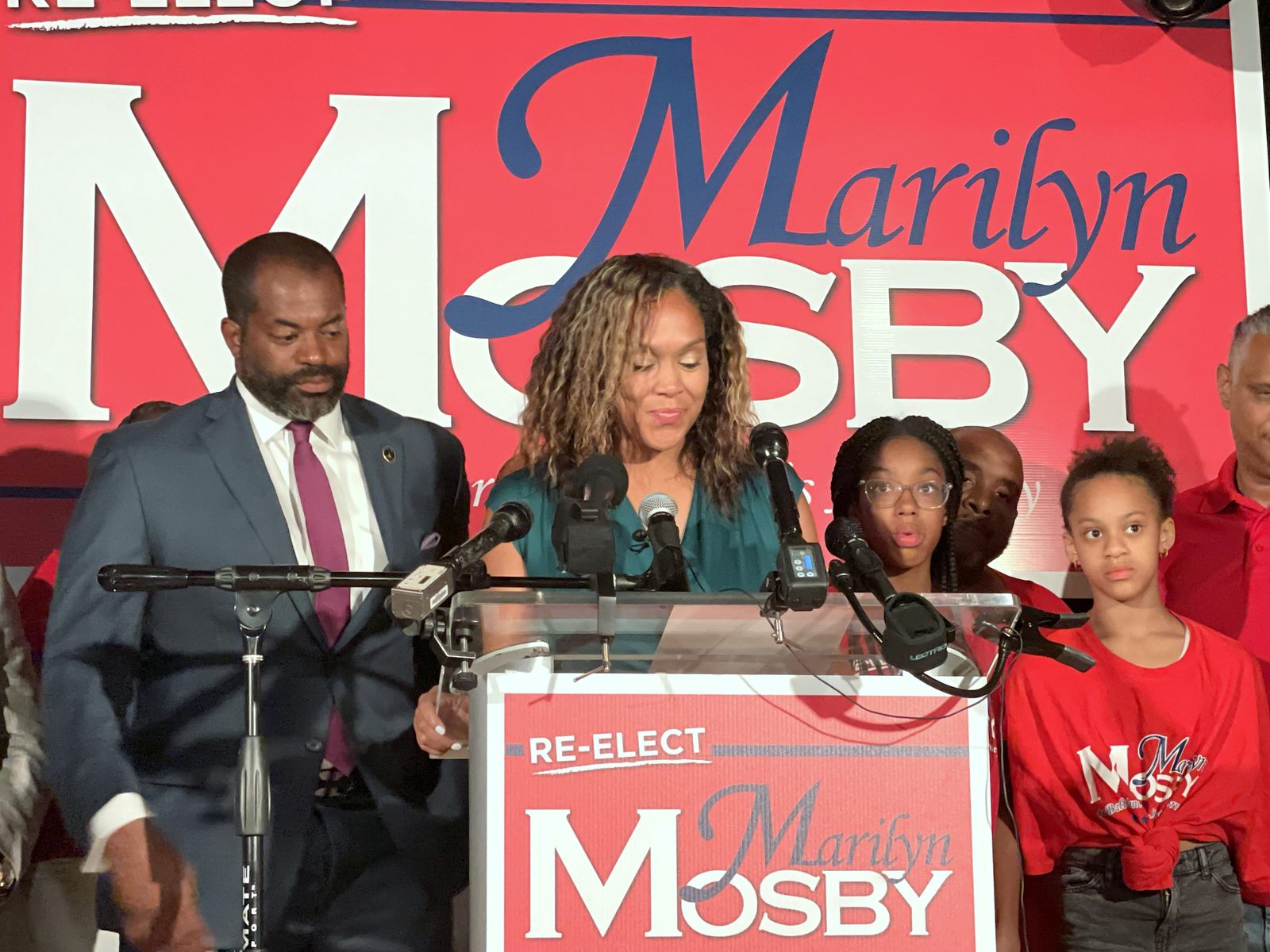 Marilyn Mosby, with her two daughters and husband, at Melba’s Place after she lost the state’s attorney’s primary race to Ivan Bates last July. (Fern Shen)

No Response from Mosbys

Neither Marilyn or Nick Mosby – nor their campaign treasurers, Sharif Small and Erika Dorsey – have responded to written questions from The Brew about the discrepancies in their campaign reports.

Jared DeMarinis, director of campaign finance at the State Elections Board, said, “I will never hypothesize” about potential campaign violations until his unit completes audits of the 2022 campaign reports, which won’t get underway until 2023.

If an error is found, the committee is given time to amend the report; if criminal violations are suspected, DeMarinis says the matter is referred to the State Prosecutor.

Unlike most parts of the finance report, which are generated by a computer based on receipts and expenditures submitted by the campaign, a committee must manually put in the amount of cash it holds in a bank account.

DeMarinis said the longtime rule is that a candidate’s “bank account balance” should be the same – or very nearly the same – as the “calculated cash balance” generated by the computer.

“But sometimes candidates forget to do that,” he said in a phone interview today.

Until the October and November reports  were filed, Marilyn Mosby’s campaign showed identical bank and calculated cash balances. So did Nick Mosby’s reports when they covered the immediate period after he was elected president of the City Council in 2020.

But beginning in 2021, Nick Mosby’s bank balances were consistently about $13,000 less than the computer-generated balances. This began during a period when Mosby said he raised $72,755, but spent over $87,000.

So far  in 2022, Nick Mosby reports raising just $500. That came from a single contribution from the Constellation Energy Corp. Employee PAC last July.